NUR-SULTAN – President Kassym-Jomart Tokayev dismissed Murat Bektanov from the Minister of Defense’s position and appointed Ruslan Zhaksylykov as the new minister, the Akorda reported on Jan. 19. 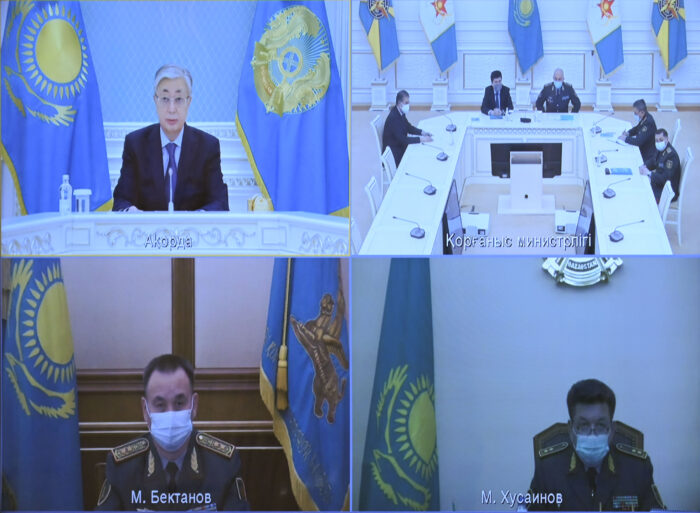 Zhaksylykov previously served as the Deputy Minister of Internal Affairs – Commander-in-Chief of the National Guard.

Tokayev noted that Zhaksylykov has extensive experience and worked in the internal troops for more than 30 years.

The President also set new tasks for the Armed Forces during the Jan. 19 meeting. He said that the army should be the pillar of independence and protect the interests of the country.

During the January events, the Armed Forces were “unable to use their potential in a critical situation.”

“The Collective Security Treaty Organization (CSTO) peacekeeping forces focused on peacebuilding support. Its deployment in Kazakhstan was short-term, but effective, and demonstrated the potential of the CSTO,” said Tokayev.

The President set forward the task to increase the military capabilities of the Armed Forces. First, military intelligence should be strengthened to provide reliable information about external and internal threats.

Second, the newly established Command of the Special Operations Forces has a mission to take organizational measures and be ready to conduct special operations jointly with other power bodies.

Third, prevention of accidents at ammunition storage facilities are essential. It is necessary to ensure the safe storage of ammunition, as well as the disposal of ammunition unusable and dangerous for further storage.

Technical and military equipment should also be upgraded.

Earlier, the Finprom analytical agency reported that Kazakhstan provides insufficient funds for military expenditure both nationally and globally (only 1 percent of GDD). This is a comparatively low indicator by international standards. The experts believe that the government will increase spending on the military budget taking into account the recent attacks.

The President also spoke about the strategic need to restructure the Armed Forces, law enforcement agencies, national security agencies, and intelligence services at the plenary session of the Majilis, the lower house of Parliament, on Jan. 11. The new reforms in the law enforcement system will be on the agenda at the meeting of the Security Council in the near future.