NUR-SULTAN – The two-week state of emergency will be suspended in stages in the regions where the situation is stabilized, said Kazakh President Kassym-Jomart Tokayev on Jan. 7, reports his press service.

A state of emergency was declared to ensure public safety and protect the rights and freedoms of people in the country from Jan. 5 to Jan. 19 after the fuel protests spread nationwide.

Almaty quickly became the epicenter of rioting with armed groups taking over the city’s airport, and targeting strategic facilities, including the local police department and city hall. Many businesses in the city were looted, and the preliminary damage is estimated at 78 billion tenge (US$179.1 million), according to the Atameken National Chamber of Entrepreneurs. 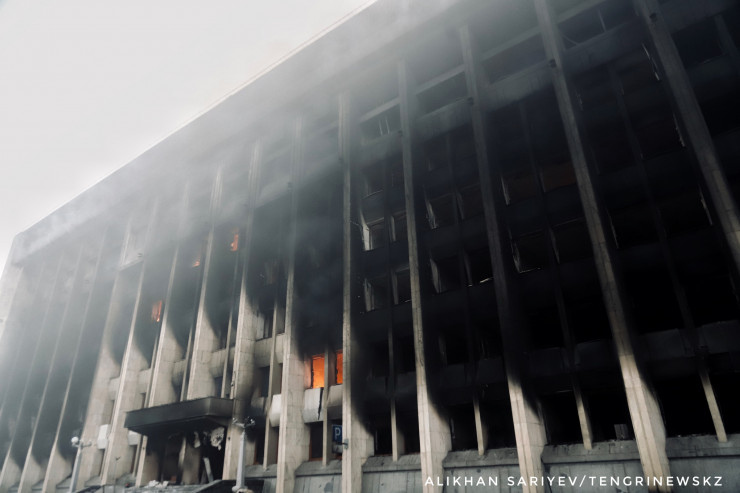 The building of the Almaty city administration was burned down. Photo credit: Alikhan Sariyev/Tengrinews.kz

Earlier, Tokayev spoke about the situation in the country and anti-terrorist operations in the regions with the heads of his administration, the Security Council, and law enforcement agencies. He claimed terrorists with foreign training are responsible for the protests.

“Anti-terror operation has kicked off. The law enforcement forces are working hard. The constitutional order has been mainly restored in all regions. Local authorities are monitoring the situation. But terrorists are still using weapons, causing damage to civilian property,” he said in his statement on Friday.

He also said the operation would continue until the “militants are completely eliminated.”

On Jan. 6, Chairman of the National Security Committee Yermek Sagimbayev, who was appointed by Tokayev on the post on Jan. 6, said that the threat of terrorism has been raised to a critical red level, according to Kazinform.

The antiterrorism operation is currently being held nationwide, according to the officials. And while the operation is ongoing, officials recommend people to stay home and go outside only for essential purposes.

As of Jan. 7, 18 law enforcement officials during the protests and 748 military officers of the National Guard and internal affairs officers were injured, reported the Kazakh Ministry of Interior Affairs. Nearly 4,400 were detained.

Seventy checkpoints had been set up across the country as part of tightened security measures.

In his statement on Friday, Tokayev also said that those responsible for the events in the country will be “strictly punished.”

Tokayev said he would address the nation in Majilis, the lower chamber of the Parliament, on Jan. 11, to announce the new package of reforms and measures.

While the internet remains shut down since Wednesday, in part to curb the spread of misinformation, some banking apps are still accessible without the use of the internet.

Meanwhile, Almaty international airport, which had been seized by the terrorist groups on Jan. 5, will not be working until Jan. 9 until it is fully operational to provide service to passengers. It only services military plans at the moment.

Kazakhstan has fully resumed passenger train service, according to the country’s national railway operator. Additional trains have been put on the line, and tickets can be purchased without access to the Internet through the bilet.railways.kz website and the Kaspi.kz app. The operation of strategically important railway infrastructure facilities was not disrupted.