By Saniya Bulatkulova in Nation on 21 January 2022

NUR-SULTAN – The internal affairs agencies continue to conduct pre-trial investigations on the mass unrest and looting that began in Kazakhstan in early January. 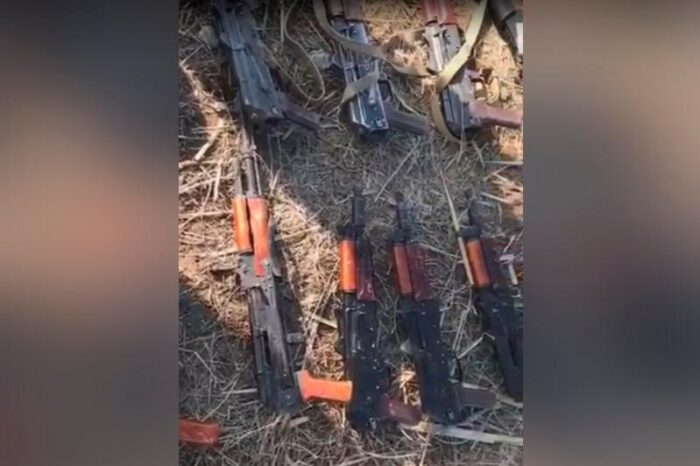 Secretary of State Erlan Karin recently said in his interview to Khabar TV that more than 2,000 weapons were taken away and 44 criminal proceedings were launched under the terrorism charges.

Police officers in the Zhambyl Region found an arms cache while conducting investigative work in the field near Kostoba village on Jan. 20

“We found 8 assault rifles with 17 cartridge clips for these rifles, a handheld grenade launcher, a 12-gauge gas-trauma rifle, a Winchester rifle, and a bayonet knife. All confiscated weapons were sent for forensic firearm examination,” said Deputy Head of Zhambyl Region Police Department Nurzhan Kalmetov in his interview to Polisia.kz information media portal.

Border control officers in the Zhambyl Region revealed a stash with firearms two kilometers from the state border on Jan. 17. They removed four pistols and six rifled and smooth-bore weapons.

All together, 2608 terrorists were arrested in the region. Among them were 161 weapons – 48 automatic Kalashnikovs, 13 sniper rifles, 6 Saiga carbines, 23 handguns, 3 traumatic guns, 33 sport-shooting guns and an RPG.

According to the press service of the Akmola Region Police Department, police officers also found an armory consisting of 10 unregistered hunting rifles and guns, 20 cold weapons and 15 munitions.

In the same region, border control soldiers detained two Kazakh citizens in Nur-Sultan city heading to Russia as they tried to smuggle knives, brass knuckles and handcuffs on Jan. 16. Police officers also detected several videos with their participation in protests and mayhem in Almaty on their phones. 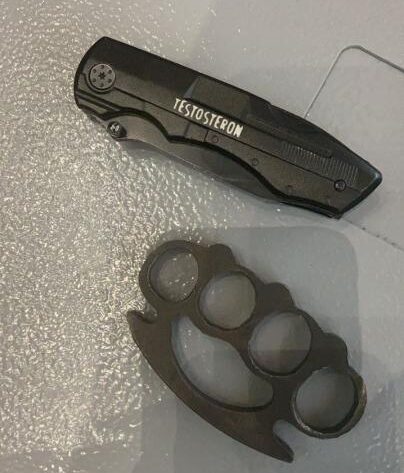 Two Kazakh nationals tried to smuggle knives, brass knuckles and handcuffs, but were detained at the airport. Photo credit: gov.kz

Some citizens, who participated in mass unrest, have dumped their illegal weapons and ammunition in various places to avoid being punished.

According to Polisia.kz, the criminal police department found three Makarov pistols with cartridge clips in an abandoned building in Ushtobe city located in the Almaty Region on Jan. 17.

A few days earlier on Jan. 14, a 21-year-old resident of Kyzylzhar village, who took part in mass riots in Almaty, reported to the police the location of two arms caches.

He agreed to cooperate with authorities and reported that unknown robbers of the Alpamys gun shop gave him a rifled barrel and a 12-gauge double-barrel during the mass riots in Almaty on Jan. 6. He proceeded to collect ammunition for a rifled, smooth-bore weapon and a pistol in front of the store. Later, he hid the weapon and ammunition in the foothills.

Many of the weapons mentioned above were used in armed attacks on the Almaty Police Department, and police departments in Almaty’s Auezov, Almalinsk, Bostandyk, Medeu, and Zhetysu districts on the night of Jan. 6.