By Saniya Bulatkulova in Astana, Culture on 30 January 2022

NUR-SULTAN – The performance of the famous Mahler’ Symphony No. 8 by 1,200 musicians of Astana Opera broadcasting on the French Mezzo TV channel on New Year’s Eve impressed approximately 40 million viewers around the world, reports the theater’s press service. 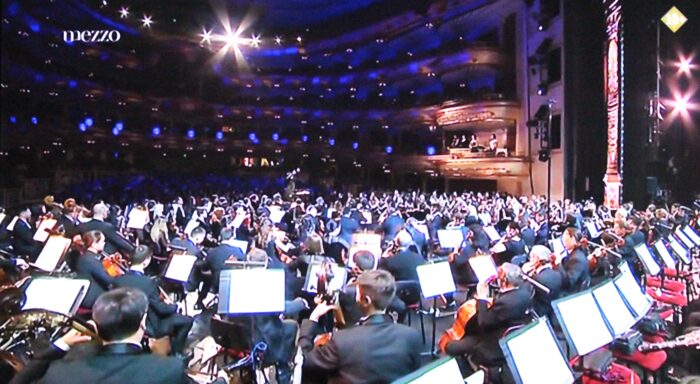 The concert, conducted by renowned maestro and principal conductor of Astana Opera Alan Buribayev, was shown in 38 European and worldwide countries.

“Firstly, I was shocked by the scale of this project, it seems organizing such a big concert probably required huge effort. The sound of the orchestra, choir and soloists was at the highest level. The world-famous conductor – Alan Buribayev – is loved not only here in Europe, but everywhere today. He unlocked the huge potential of Kazakh artists at this concert, and Kazakhstan certainly became closer to us,” wrote Christian Erskin on social media.

Erskin wasn’t the only follower who appreciated the creative potential of Kazakh musicians and shared her impressions.

“This is one of my favorite symphonies by Mahler. Performed by Kazakh people, it sounded special. I think mastery of artists and their delicate understanding of music played a crucial role. I had a wonderful evening. I advise all who have not yet listened to this great concert to follow the program and make sure not to miss its next broadcast,” noted Fleur de Guise.

According to the theater’s administration, the Astana Opera strives to promote the opera, ballet and symphony art of Kazakhstan globally.