We live in worrying times. The climate crisis, stark inequalities, bloody conflicts and human rights abuses, and the personal and economic devastation caused by the COVID-19 pandemic have put our world under greater stress than it has faced in my lifetime. 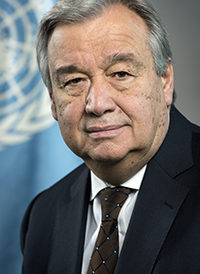 But the existential threat that cast a shadow over the first half of my life no longer receives the attention it should. Nuclear weapons have faded from headlines and Hollywood scripts. But the danger they pose remains as high as ever, and is growing by the year. Nuclear annihilation is just one misunderstanding or miscalculation away – a sword of Damocles that threatens not only suffering and death on a horrific scale, but the end of all life on earth.

Through a combination of luck and judgement, nuclear weapons have not been used since they incinerated Hiroshima and Nagasaki in 1945. But with more than 13,000 nuclear weapons held in arsenals around the world, how long can our luck hold? The COVID-19 pandemic has brought a new awareness of the catastrophic impact of a low-probability event.

Following the end of the Cold War, nuclear arsenals were dramatically reduced and even eliminated. Entire regions declared themselves nuclear-weapons free zones. A deep and widespread repudiation of nuclear testing took hold. As Prime Minister of my country, I ordered Portugal to vote for the first time against the resumption of nuclear testing in the Pacific.

But the end of the Cold War also left us with a dangerous falsehood: that the threat of nuclear war was a thing of the past.

Nothing could be more mistaken. These weapons are not yesterday’s problem. They remain today’s growing threat.

The risk that nuclear weapons will be used is higher now than at any point since the duck-and-cover drills and fallout shelters of the Cold War.

Relationships between some countries that possess nuclear weapons are defined today by distrust and competition. Dialogue is largely absent. Transparency is waning and nuclear weapons are assuming greater importance as national security strategies find new contexts for their use.

Meanwhile, technological advances and the emergence of new arenas of competition in cyber space and outer space have exposed vulnerabilities and increased the risk of nuclear escalation. We lack international frameworks and tools that can deal with these developments. And today’s multipolar global order means that regional crises with nuclear overtones threaten to draw in other nuclear-armed countries.

The nuclear landscape is a tinderbox. One accident or miscalculation could set it alight.

Our main hope to reverse course and steer our world away from nuclear cataclysm is the Treaty on the Non-Proliferation of Nuclear Weapons – better known as the NPT – which dates from the height of the Cold War in 1970.

The NPT is one of the main reasons why nuclear weapons have not been used since 1945. It contains legally binding commitments to achieve nuclear disarmament, including by the five largest nuclear-armed countries. It is also a catalyst for disarmament – the only way to eliminate these horrendous weapons once and for all.

The 191 countries that have joined the NPT – representing the vast majority of the world – have pledged not to acquire or develop nuclear weapons. And these pledges are policed and enforced by the International Atomic Energy Agency.

One month from now, the countries that are members of the NPT will meet for their regular five-yearly conference to look at the Treaty’s progress.

Another United Nations conference for a treaty with an acronym may not seem particularly newsworthy. But the NPT is critical to the security and prosperity of all people on earth.

We must seize the opportunity of January’s NPT Review Conference to reverse dangerous and growing trends and escape the long shadow cast by these inhumane weapons.

The review conference must take bold action on six fronts:

– Agree new measures of transparency and dialogue, to reduce the risk of nuclear war.

– Address simmering nuclear crises in the Middle East and Asia.

– Work to strengthen the global frameworks that support non-proliferation, including the IAEA.

–  Promote the peaceful use of nuclear technology for medical and other uses – one reason why the NPT has won the adherence of non-nuclear-weapons states.

– And remind the world’s people – especially its young people – that eliminating nuclear weapons is the only way to guarantee they will never be used.

I urge governments to approach the conference in a spirit of solidarity, frank dialogue, and flexibility.

What happens in the NPT negotiating rooms in January matters to everyone – because any use of nuclear weapons will affect everyone.

The fragility of our world has never been clearer.

I hope people everywhere will push governments to step back from the abyss and create a safer, more secure world for all: a world free of nuclear weapons.