NUR-SULTAN – The 17th international high-level meeting on Syria, known as the Astana Process, concluded on Dec. 22 in Nur-Sultan with delegations stressing the importance of maintaining the territorial integrity of Syria and stepping up efforts to combat terrorist groups. 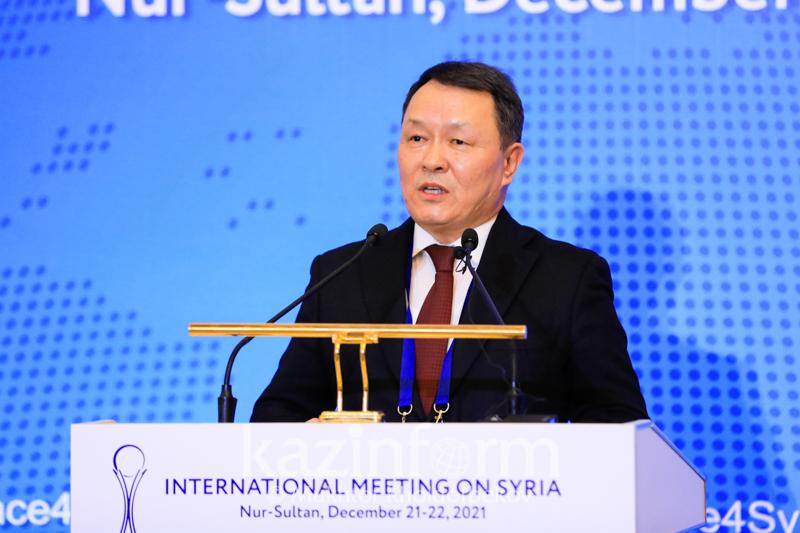 Ontalap Onalbayev, the Director of the Middle East and Africa Department of the Kazakh Ministry of Foreign Affairs. Photo credit: inform.kz

Delegations from Syria and the Syrian opposition, the guarantor states of Russia, Iran, and Turkey also discussed the issues related to forcibly detained people and humanitarian aid.

Ontalap Onalbayev, the Middle East and Africa Department Director at the Kazakh Ministry of Foreign Affairs, summarized the main outcomes of the meeting with four major points.

All the participating states “reaffirmed their strong commitment to the sovereignty, independence, unity and territorial integrity of the Syrian Arab Republic, and to the purposes and principles of the United Nations Charter and highlighted that these principles should be universally respected and complied with.”

The second point concerned the agreement to join forces against the activity of terrorist organizations on the territory of Syria. Delegations “expressed their determination to continue cooperation in order to combat terrorism in all its forms and manifestations and stand against separatist plans aimed at undermining the sovereignty and territorial integrity of Syria and threatening the national security of neighboring countries.”

They also condemned the increase in terrorist activity in various parts of Syria, which resulted in loss of innocent lives, including attacks on civilian facilities.

“(The sides) reaffirmed the need for continued cooperation in order to ultimately eliminate the Islamic State of Iraq and the Levant (ISIL), Hayat Tahrir al-Sham/Jabhat al-Nusra and all other individuals, groups, entities and organizations affiliated with Al-Qaida or Daish/ISIL and other terrorist groups recognized as such by the United Nations (UN) Security Council, while ensuring the protection of civilians and civilian infrastructure in accordance with international humanitarian law,” reads the joint statement.

The sides expressed serious concern over the increased presence and terrorist activities of the Hayat Tahrir al-Sham group and other affiliated terrorist organizations recognized as such by the UN Security Council, which threaten civilians inside and outside the Idlib de-escalation zone.

The involved parties reviewed in detail the situation in the Idlib de-escalation area and agreed to make further efforts to improve the humanitarian situation in and around the area.

“They also highlighted the need to maintain calm on the ground by fully implementing all existing agreements on Idlib,” said Onalbayev reading out the statement.

The final point was to prevent the formation of new groups that might undermine Syrian sovereignty.

The representatives of participating parties “discussed the situation in northeastern Syria and agreed that permanent security and stability in this region can only be achieved by preserving Syrian sovereignty and territorial integrity, rejected all attempts to create new realities on the ground, including illegal initiatives of self-government under the pretext of combating terrorism.”

“Reaffirmed their determination to stand against separatist plans in the east of the Euphrates, which aim to undermine Syrian unity and threaten the national security of neighboring countries. Expressed grave concern in this regard over the intensification of fighting and all forms of oppression by separatist groups against the civilian population east of the Euphrates. Reiterated their opposition to the illegal seizure and transfer of oil revenues, which should belong to Syria,” Onalbayev concluded.

The Russian Special Presidential Envoy for Syria Alexander Lavrentiev said that “much has been done over the past six months,” since the last meeting of the 16th Syrian talks in July, 2021.

“Joint actions have reduced the tensions in Syria and the level of armed confrontation in the de-escalation zones. The number of provocations has been reduced tenfold. We managed to prevent a negative development of the situation in the south of Syria and were able to extend this positive experience to the north of the country. About 12,000 people have settled their status in southern Syria, and another 10,000 were able to do that in Deir ez-Zor in the north of the country,” said Lavrentiev.

Considerable work has been done in regards to detainees, added Lavrentiev. “About 500 people previously accused of anti-Government activities have been released from Syrian prisons. 66,000 cases against individuals, who were on the wanted list for anti-state activities, have been suspended. It is absolutely impossible not to notice this progress,” said Lavrentiev.

Delegations agreed to hold the next 18th round of negotiations in the first half of 2022 in Nur-Sultan. The next trilateral summit with the guarantor states of Russia, Iran, and Turkey is planned to take place in Tehran, Iran in February-March, 2022 if the situation with the coronavirus pandemic allows for it.