NUR-SULTAN – Kazakhstan and Uzbekistan have decided to improve bilateral ties to a new level from strategic partnership to alliance, after President Kassym-Jomart Tokayev and President of Uzbekistan Shavkat Mirziyoyev signed a declaration of allied relations during Mirziyoyev’s state visit to Kazakhstan on Dec. 6, reports Akorda press service. 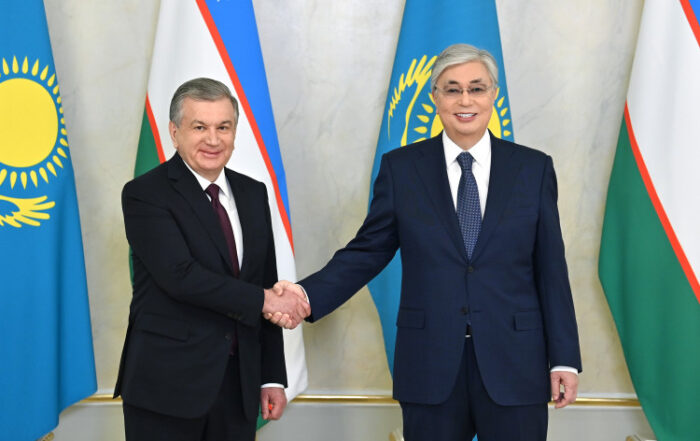 He met with President Kassym-Jomart Tokayev, and the two leaders discussed political, trade and economic, investment, transport and transit, cultural and humanitarian cooperation. The sides agreed that there was untapped potential in the agriculture and industrial sectors for further cooperation. Ways to ensure stability and security in the region, as well as interaction with multilateral structures was also on the meeting agenda.

Tokayev said that Uzbekistan is not only a good neighbor and an important partner, but also a “fraternal state with common roots and a common fate” and called the establishment of the alliance a “historic decision driven by genuine desire to work more closely based on trust, support, and consideration for mutual interests.”

“This is really a new level of our relations, because previously we relied on the principles of strategic partnership. I believe that the package of documents to be signed today will give an additional impetus to cooperation between our countries. Moreover, we have agreed that the governments will do their best to bring the trade volume up to $5 billion and then to $10 billion in the near future. This is a very high level,” said Tokayev, as he welcomed Mirziyoyev in Akorda. Over the first ten months of 2021, bilateral trade grew 30 percent reaching US$3 billion.

According to him, alliance between Kazakhstan and Uzbekistan is a strong factor in ensuring stability and security in the Central Asian region.

“This is true without any exaggeration. We can say that the better the relations between our countries, the more stable the situation in our very important region will be,” said Tokayev.

During the expanded meeting with Mirziyoyev and his official delegation, the sides focused on strengthening trade and economic cooperation, including increasing mutual trade turnover, attracting investments, and developing cooperation in industry, agriculture, construction, and transport. They also discussed cooperation in the water and energy, cultural and humanitarian spheres.

The sides noted Kazakhstan’s and Uzbekistan’s common vision for a global agenda, including the response to the situation in Afghanistan.

Mirziyoyev also commended the bilateral ties between the countries.

“We once again confirmed the close interests and common positions on some of the most acute issues in our multifaceted cooperation. We highly appreciate the special warm and fraternal relations between our countries. Here is the evidence that Kassym-Jomart Kemelevich has just said that the people are happy about the visit. In fact, the people of the border regions are very happy, the more we meet, the better relations we have. We have successful examples of cooperation in engineering, energy, electrical, chemical, textile, banking and other areas,” said the President of Uzbekistan.

As part of his visit, Mirziyoyev attended the opening of a new building of the Uzbek Embassy in Nur-Sultan.