By Oleg Vasiliev in Kazakhstan’s Independence: 30 Years, Nation on 13 December 2021

Editor’s note:  The analytical article published on Zakon.kz, an online news outlet, describes Kazakhstan’s path to normalization of the economic and political situation after gaining independence. The article was originally written in Russian.

NUR-SULTAN – On Dec. 16, 1991, the Supreme Council adopted the Constitutional Law “On the State Independence of Kazakhstan.” The government set a task to normalize the economic and political situation. 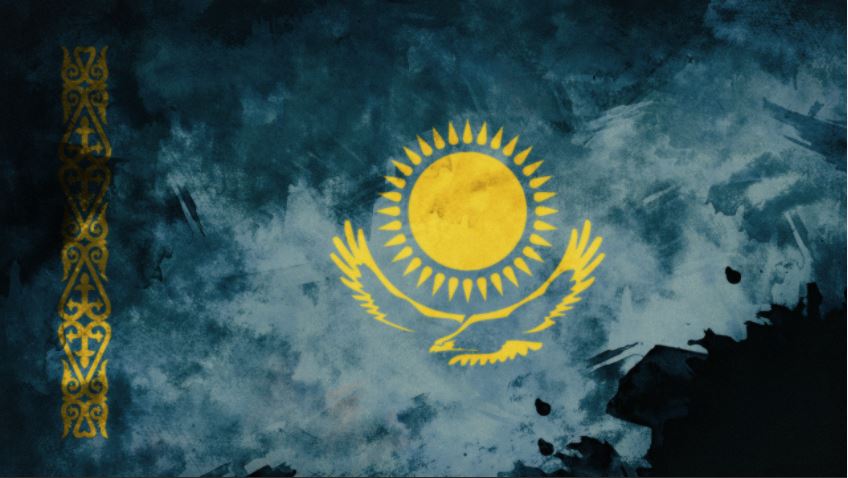 The young country needed the introduction of processes to strengthen independence: establishing citizenship, approving state symbols, creating independent institutions, introducing its own currency, preventing the deterioration of the socio-economic well-being of citizens and, most importantly, shaping the image of sovereign Kazakhstan as a dynamic and progressive country, reliable partner and loyal ally.

Relocation of the capital – a strategy for the future

The idea of ​​transferring the capital belonged to the First President of Kazakhstan and was a strategically important necessity.

Having gained independence, Kazakhstan began the process of forming its own geopolitical space, for which a new political center was needed, which would become the main link between all regions of the country.

“The realities of the present and a number of geostrategic factors forced us to approach the process of forming our own geopolitical space in a new way,” said Nazarbayev.

With the acquisition of independence, a new state reality emerged, which required adequate institutions. 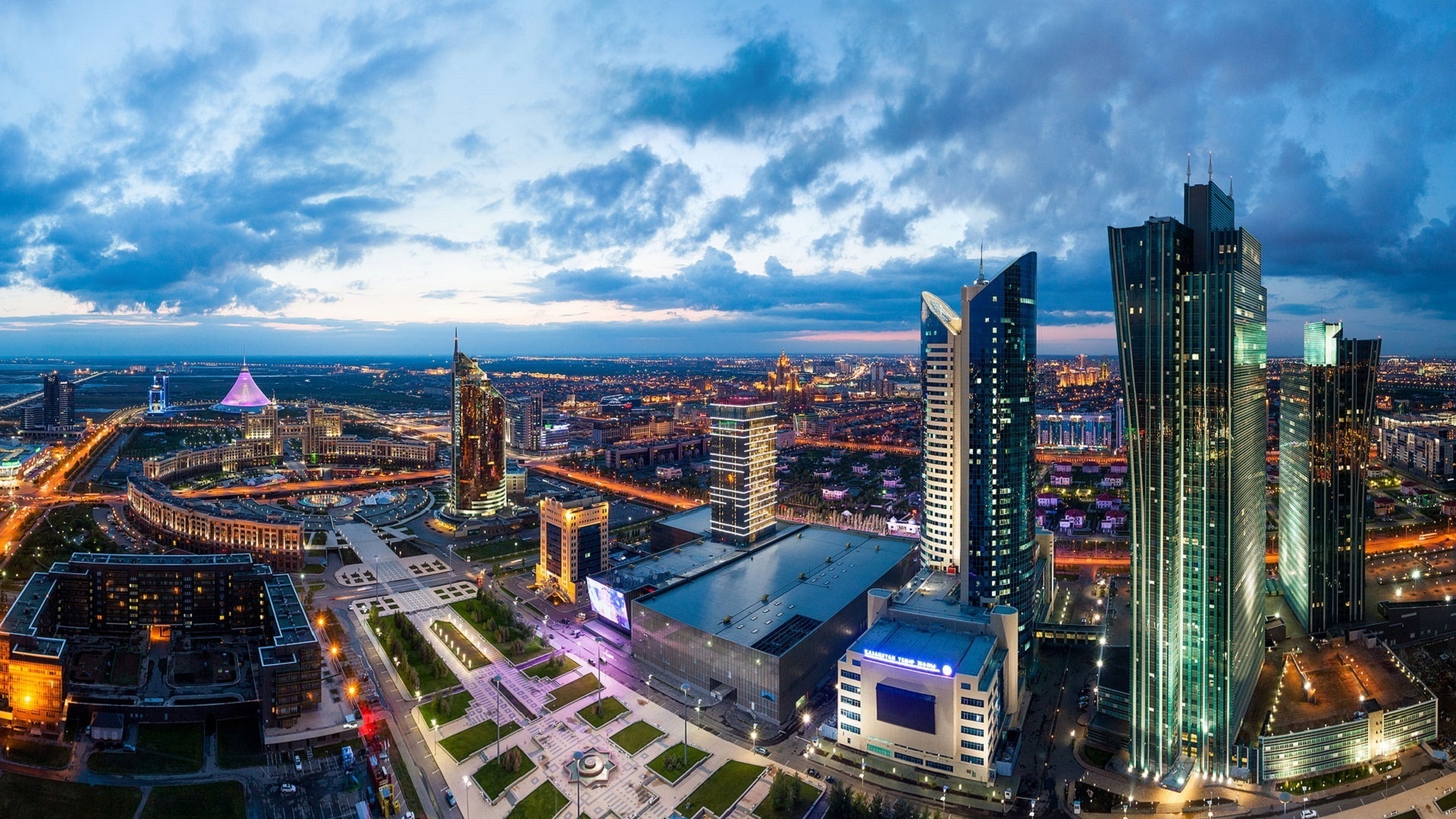 “The heart of the country pulsates in its capital. This is an axiom. The young state definitely needs a new, modern capital. I was absolutely sure of this from the first days of independence. Already in 1992, during one of my working trips to Akmola, I had the idea of ​​moving the capital,” said Nazarbayev.

The main idea behind ​​the transfer of the capital originated from the need to create conditions for the internal integration of all regions of the country and to provide an impetus for the economic growth of the country.

When searching for a place for a new capital, various options were considered based on a number of criteria: geographical (i.e., the approximate equidistance of the capital from all regional centers), climatic and socio-economic, military-strategic factors, prospects for the development of transport and engineering infrastructure, opportunities construction, demographic, as well as scientific and cultural growth.

The decision to move the capital to Akmola was made by the Supreme Council of Kazakhstan on July 6, 1994. The official transfer took place on Dec. 10, 1997. By the decree of the First President dated May 6, 1998, Akmola was renamed to Astana, and in 2019 the Kazakh President Kassym-Jomart Tokayev, decided to rename the city to Nur-Sultan. 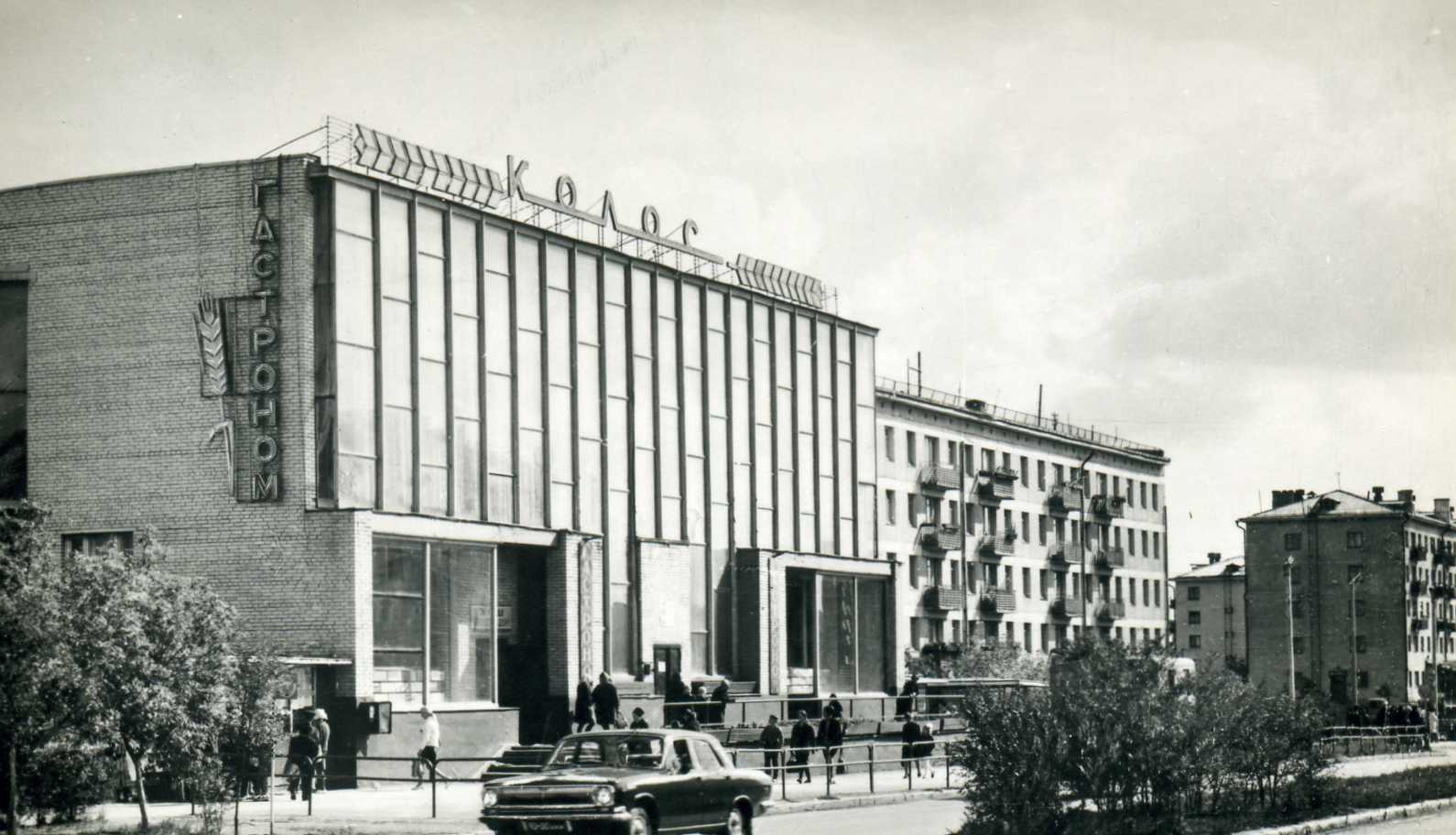 The street of Tselinograd (the name of the modern capital in 1960s). Photo credit: yvision.kz

The official presentation of the new capital of Kazakhstan took place on June 10, 1998. In 1999, according to the decision of the United Nations Educational, Scientific and Cultural Organization (UNESCO), Astana received the title of “City of Peace.” In 2000, the main city of Kazakhstan became a member of the International Assembly of Capitals and Major Cities. Nur-Sultan is the northernmost capital in Asia. The total population of the metropolis exceeds one million people.

The location in the center of the Eurasian continent makes Nur-Sultan an economically profitable transport, communication and logistics center, a kind of transit bridge between Europe and Asia.

The transfer of the capital gave a powerful impetus to the economic development of not only Nur-Sultan, but the entire country. The high growth rates of the city’s economy attract numerous investors. The share of the Kazakh capital in the national volume of attracted investments is 10 percent, the share of the city’s Gross Regional Product (GRP) in the economy of the country is 10.2 percent.

The capital’s economy is based on industrial production, transport, communications, trade, and construction. 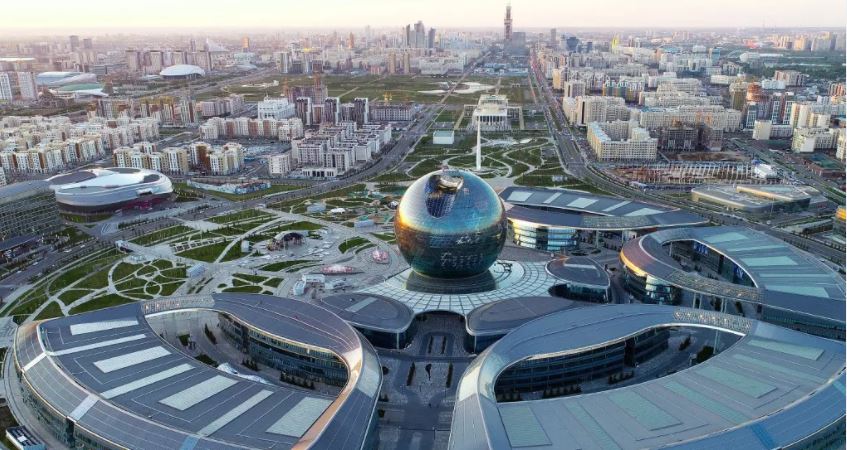 Among the largest enterprises in the city, one can single out such objects as the Tselinograd Car Repair Plant, the Tsesna-Astyk concern, the Tulpar-Talgo passenger car assembly plant, the Eurocopter Kazakhstan Engineering helicopter assembly plant, among others.

The business sector is developing dynamically. More than 128,000 small and medium-sized businesses operate in Nur-Sultan.

The Kazakh capital has become the center of the Eurasian space, hosting various forums, congresses, and other events of international importance.

The Congress of Leaders of World and Traditional Religions and the Astana Economic Forum are held here on a regular basis. The historic summit of the Organization for Security and Co-operation in Europe (OSCE) members took place in Nur-Sultan, the anniversary summits of the Shanghai Cooperation Organization (SCO) and the Organization of Islamic Cooperation (OIC) were also held here, and an international dialogue platform was formed on the settlement of the Syrian conflict. In 2017, the Kazakh capital hosted the international exhibition EXPO 2017. 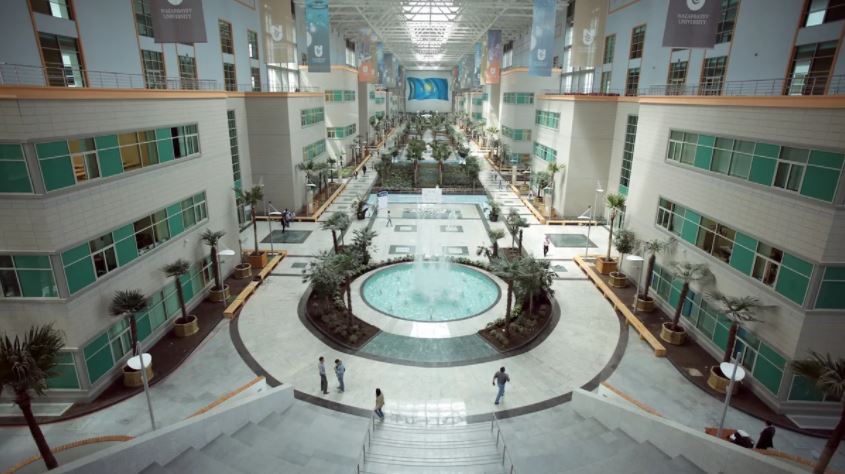 The campus of Nazarbayev University in Nur-Sultan. Photo credit: 2014.eurasiaiff.com

The Astana International Financial Centre was created in Nur-Sultan, which already has every chance to take the position of the main center of financial relations and technologies not only in the Central Asian region, but also in the entire post-Soviet space.

As Deputy Director of the Institute of Economic Forecasting of the Russian Academy of Sciences Dmitrii Kuvalin noted earlier, there are only a few international financial centers (IFCs) in the world – places of concentration of business and financial infrastructure that are of international importance for the global and regional macroeconomics. These include London, New York, Zurich, Frankfurt am Main, Shanghai, Tokyo, and Hong Kong.

In the post-Soviet space, Moscow and St. Petersburg made attempts to create an IFC. However, in this case, Kazakhstan outstripped its Russian counterparts by opening and fully launching the Astana International Financial Centre (AIFC) in Nur-Sultan.

The AIFC project was conceived back in 2015 to link the economies of the countries of Central Asia, the Caucasus, the Eurasian Economic Union (EAEU), Western China, Mongolia, the Middle East, and Europe. In July 2018, its official opening took place, and in 2020 a development strategy through 2025 was adopted.

As Tokayev noted, the AIFC with its unique capabilities can act as a universal platform connecting the countries of the region.

Now, over 600 companies from 47 countries are registered in the AIFC. This fact may allow it to become the main mediator between China and the countries of the post-Soviet space. The total assets of the financial sector of the AIFC total $569.8 million.

The core of the center is the stock exchange – Astana International Exchange (AIX), the infrastructure of which was created in partnership with NASDAQ, Goldman Sachs, the Silk Road Fund and the Shanghai Stock Exchange.

In 2019, the Astana Exchange raised about $217 million in equity capital, several times more than the entire stock market of Kazakhstan in the previous three years. In 2020, the turnover of trade transactions on the exchange increased, despite the difficult working conditions. In October and September, it amounted to $5.4 million and $3.9 million, respectively.

The ecosystem of the exchange is formed by more than 20 local and international trade members, including the Russian brokers VTB Capital and UNIVER Capital.

The Astana Exchange has created attractive conditions for companies in the mining sector. Depending on their size, they are exempted from a number of listing requirements. The decision to provide special preferences to the mining sector is related to the fact that there are many deposits and mines in Central Asia, some of which are of global importance. 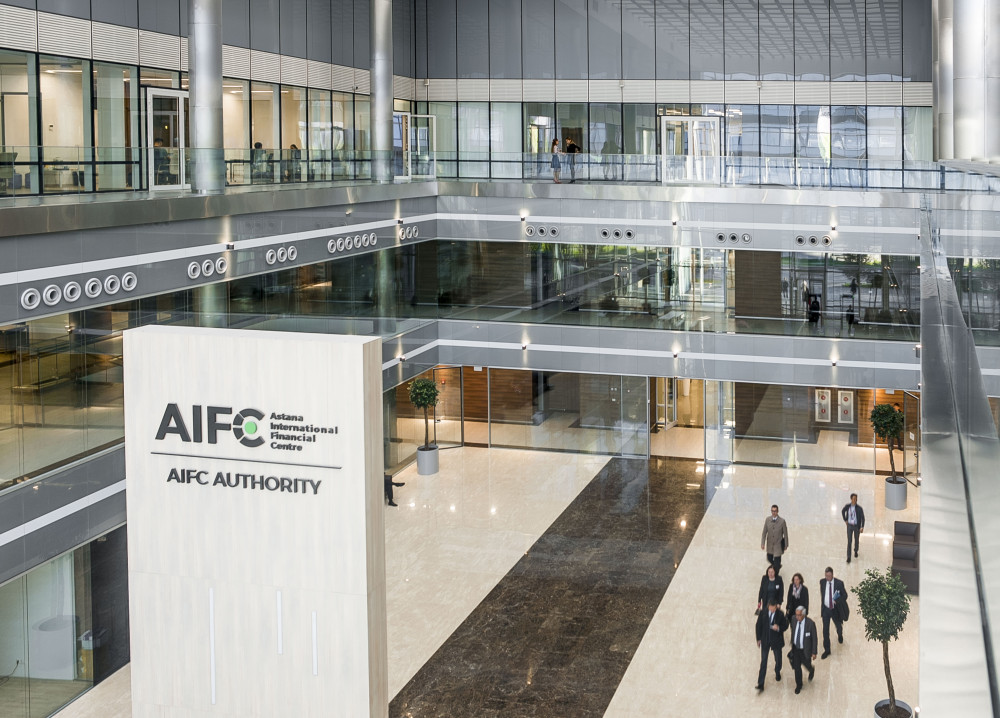 The office of AIFC in Nur-Sultan city. Photo credit: aifc.kz

The official language of the AIFC is English. Another advantage over potential competitors in the post-Soviet space and, accordingly, the reason for the interest of international companies in investing is the application of the principles of English law in Kazakhstan.

Applying the principles of English law is an extremely pragmatic step because the operation of such a legal system is more understandable for international investors of all sizes. Plus, to resolve civil and commercial disputes, a court and an international arbitration center were created based on the AIFC, which can work remotely through the electronic platform eJustice.

The international financial center also operates systems to facilitate the integration of foreign representatives into the Kazakh business community (AIFC Expat Center), a special body to stimulate and attract direct investments in various business projects of Central Asian countries with their subsequent information and organizational support, as well as a structure that promotes sustainable financing of projects in Kazakhstan and the entire Central Asian region (AIFC Green Finance Center).

The foundation for economic development in the first years of independence, as well as the consistent and phased implementation of the initially chosen strategy, allowed Kazakhstan to repeatedly overcome all financial and economic shocks, including the consequences of the global pandemic.

Kazakhstan has always reacted to crises with its inherent Eastern pragmatism, philosophically and without much panic.

Thus, according to the assessment of World Bank experts, rapid growth due to structural reforms, the use of numerous hydrocarbon resources, high domestic demand and foreign direct investment helped to reduce the level of poverty and raise Kazakhstan into the category of countries with higher middle incomes.

In addition, World Bank experts note that the Kazakh economy has also managed to withstand the direct pressure from the global pandemic, and after a certain recession, an increase in economic growth is predicted to reach 3.2 percent. In their opinion, the Kazakh government promptly responded to the crisis that arose against the backdrop of COVID-19 and presented a package of budgetary incentives in the amount of about six percent of Gross Domestic Product (GDP) aimed at supporting small and medium-sized businesses. 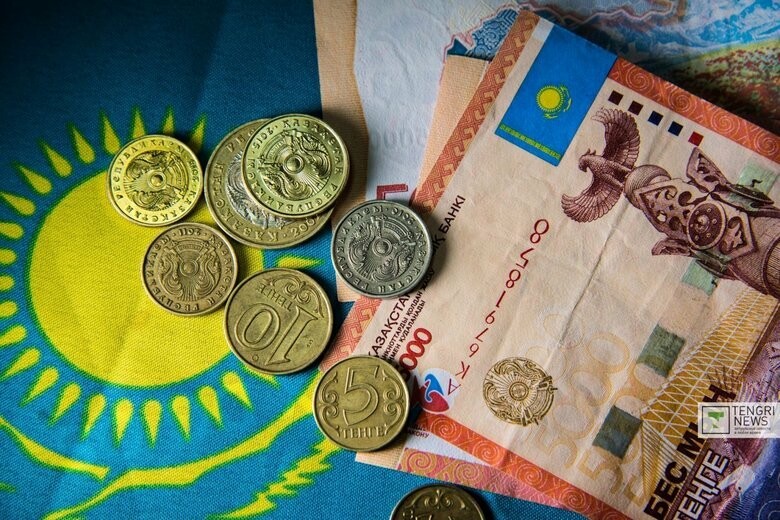 The national currency of Kazakhstan is tenge. Photo credit: 7152.kz

The first policy priority is to diversify the economic base by increasing the competitiveness of the non-oil and gas sectors, including through financial sector reforms and investment policy. The second priority is to limit the excessive role of enterprises in the quasi-public sector, increase competition and create a level playing field for the private sector. The third priority is to improve the quality and progressiveness of budget spending in order to eliminate inequality.

After a sharp drop in exports and a commensurate reduction in imports, the current account balance did not change and amounted to 3.4 percent of GDP. The reserves of the National Bank of Kazakhstan increased by almost $6.7 billion at the end of 2020 to $35.6 billion, due to the rise in gold prices, despite significant intervention in the foreign exchange market.

The article was originally published in Zakon.kz.