NUR-SULTAN – After a large-scale restoration, the majestic Kazakhstan pavilion was opened to the public at VDNH (Exhibition of Achievements of National Economy), introducing the history and culture of Kazakhstan, which celebrates the 30th anniversary of independence this year, reports Russian popular weekly Argumenty and Fakty (AiF). 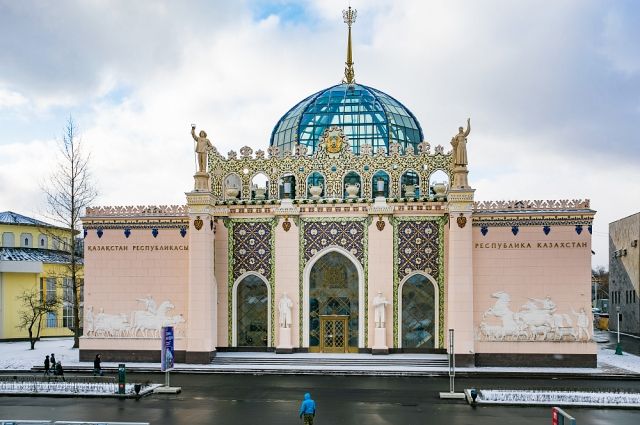 The restorers have reproduced in detail the original dome, created in the late 1930s, and also recreated the bas-reliefs dedicated to the agricultural achievements of the Kazakh SSR. On the eve of the prestigious Moscow Restoration-2021 competition, the Kazakhstan pavilion was recognized as the best object of restoration in the city. The reconstruction effort became possible with the direct participation of the Embassy of Kazakhstan in Russia.

The original Kazakh SSR pavilion was built in 1937 from wood by architect F. P. Kostenko, but after World War II it was practically dismantled. The new pavilion, personifying the state power of Kazakhstan, was created by the famous Soviet sculptor, Honored Art Worker of the Kazakh SSR Khasbulat Askar-Sarydzha. The new, now permanent pavilion of the Kazakh SSR was built in 1949-1954 by architects I. M. Petrov, I. V. Kupriyanov and T. K. Basenov.

The architectural appearance of the exhibition reflected central motifs in Kazakh national architecture. It was a building reminiscent of the mausoleum of Central Asia, surrounded by blue and white facades and topped with a dome with a spire. 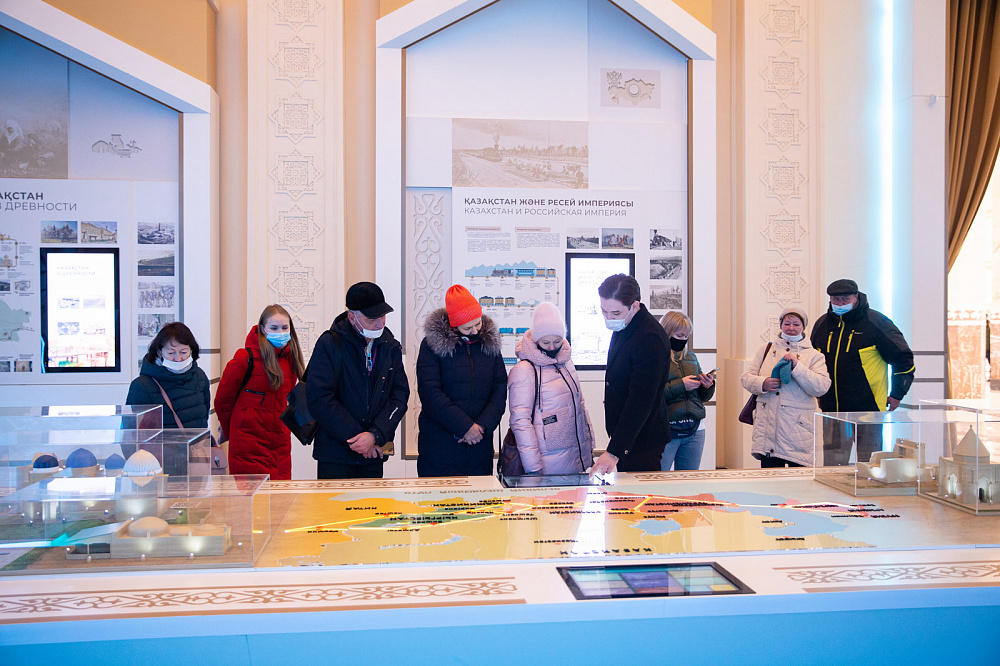 The walls were decorated with bas-reliefs reflecting the theme of agriculture, animal husbandry and mechanization in the Central Asian nation. The key sculptures on the facades of the pavilion, in addition to the symbolic collective farmer and steelworker, were the monuments to the Kazakh poet Jambyl Jabayev, as well as the innovator of agricultural production Shyganak Bersiev.

In 1964, the object was renamed “Metallurgy”. In 1966-1967, a major reconstruction of the pavilion was carried out by the architect S. Kobetsky and engineer V. Anisko. The facade was expanded with an extension made of glass and concrete, which changed the appearance of the building beyond recognition, giving it the appearance of a “concrete box.” 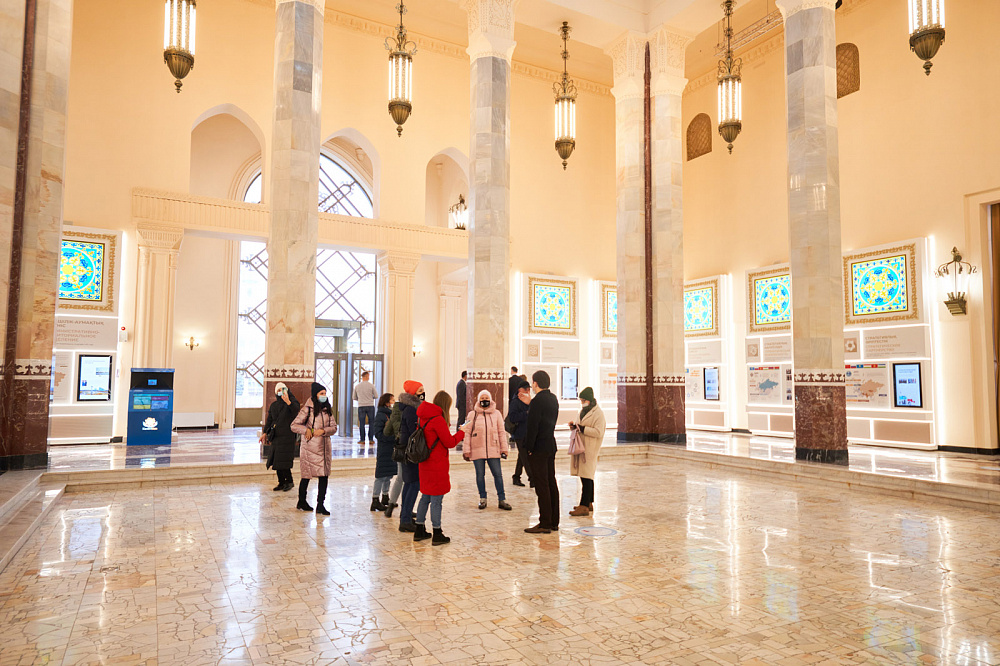 Inside the pavillion. Photo credit: VDNH

And after the collapse of the Soviet Union, the exposition was completely abolished.

When in 2011 the pavilion was leased to Kazakhstan for the future placement of the national exposition there, many experts doubted that it would be possible to restore in detail the original design of the architects. Fortunately, the efforts succeeded, although it took around ten years of painstaking work. The palace had to be restored based on archival photographs from the middle of the last century.

In 2017, the Russian Glavgosexpertiza approved the project for the reconstruction of the pavilion, which provides for the restoration of the original volume and layout of the building, including the reconstruction of the glass dome over the main exhibition hall. In the same year, during the restoration work on the facade of the pavilion, bas-reliefs from 1954 were discovered, which are planned to be restored to their original state – a farmer with a staff, a girl cattle breeder with a lamb in her arms and racing horses. The works were in good condition.

Today, with the active support of the Kazakh Embassy in Russia, the most complex parts of the restoration work have been practically completed. The building has regained its original glass dome with its graceful spire, decorated with Kazakh floral ornaments and topped with a standard depicting floral elements as well as a five-pointed star. It is curious that not a single fragment is repeated twice in the mosaic of the dome.

At the foot of the main facade, visitors are greeted by the grandiose sculptures of akyn Jambyl Jabayev and Hero of Socialist Labor Shyganak Bersiev, who during World War II broke world records in millet yield, and donated all his savings to the Motherland Defense Fund (with the money of Bersiev, whose three sons fought at the front, an aircraft was built).

In addition to historical items, the pavilion presents modern multimedia expositions on the theme Nur-Sultan, Development Strategy, and Silk Road.

A native of Kazakhstan and Honored Artist of the Russian Federation, and now the first deputy chairman of the State Duma Committee on Culture Elena Drapeko said the revival of the national pavilion is a long-awaited gift to residents and guests of the Russian capital will appreciate the historical and cultural business card of the brotherly Kazakh people in Moscow.

Mayor of Moscow Sergey Sobyanin called the project “amazing” on social media. An honorary diploma was given by him to the General Director of the Kazakhstan pavilion Vladimir Zakharov and the Minister Counselor of the Embassy of Kazakhstan in Moscow Nurzhan Kadzhiakbarov.