Interaction and Cooperation as Part of CICA Forum are Vital for Central Asia, Says Expert

By Staff Report in Central Asia on 15 December 2021

NUR-SULTAN – Sanat Kushkumbayev, the Deputy Director of the Kazakhstan Institute for Strategic Studies under the President of Kazakhstan (KazISS), spoke about Kazakhstan’s role and its activities in international organizations in a recent interview to the Lomonosov Moscow State University’s information and analytical centre. 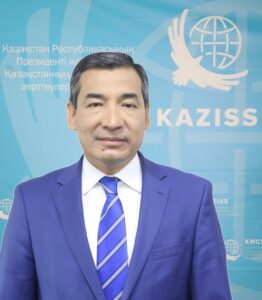 It is reported that Kazakhstan is a member and a participant of the regional and international organizations and associations, some of which are initiated by the country such as the Conference on Interaction and Confidence Building Measures in Asia (CICA). Now, the CICA has the potential to transform itself into a new regional organization.

“Starting from 2020, Kazakhstan again chaired the CICA and its secretariat is located in the capital of the country. Right now, it is still a process, not a structure, not even an organization. Discussions are currently underway about the planned institutionalization of the process, with the prospect of transformation into an organization,” said Kushkumbayev.

The idea of convening CICA was proposed by Kazakhstan’s First President Nursultan Nazarbayev at the 47th Session of the United Nations General Assembly in 1992.

Now CICA has 27 members, including Russia, Uzbekistan, Kazakhstan, Kyrgyzstan, Tajikistan and other countries. The CICA platform also gathered representatives of India, Pakistan, Iran and Israel and that was possible due to the neutrality of the format, said the expert.

“Of course, they did not conduct direct negotiations. We are not talking about some kind of bilateral talks, but about a broader agenda. The CICA has the so-called catalog of confidence building measures, which has been adopted by the participants. Countries can add their own priorities to that catalogue. For example, the countries of Southeast Asia or the Middle East (Egypt, Jordan, Israel, Turkey) have their own regional or sub-regional issues,” he said.

According to the expert, the global pandemic is now relevant for everyone and that can be a unifying factor as well. But there are also problems such as drug trafficking, small arms trade, extremism and terrorism. The countries of the vast Asian subcontinent are facing various challenges, which is why the idea for ​such a catalog of confidence-building measures emerged in the first place.

Kushkumbayev said that CICA is based on the concept of cooperative security. “Cooperative security is not against someone, but for something. That is, to solve the problems that exist between the countries. This mechanism reflects today’s globalized, increasingly interconnected world. For example, the climate problem is on the agenda of all countries, including CICA member countries. It matters to the whole world. The trade, economic and international transport agendas are of the same importance, due to the global crisis, exacerbated by the pandemic,” he said.

The expert believes that this can potentially lead to the formation of a new regional organization. If the participating countries show interest, then there might be discussions about the transformation of CICA into a full-fledged organization.

“It is no coincidence that during the fourth Conference on Interaction and Confidence Building Measures in Asia Nursultan Nazarbayev urged the participating countries to move on to discuss the possibility of creating an organization for Security and Development in Asia based on the CICA. The final decision is up to the participants of the process,” he said.

Kushkumbayev noted that all neighboring countries in Central Asia are interested in such an organization, as are bigger countries. He added that there are no fundamental objections from China, India, Pakistan and a number of Arab countries.

“Of course, we should talk about the substantive content of the process, about possible mutual obligations, a charter, a number of other institutional aspects, and so on. The question is in the details, and they are just the defining ones,” he stated.

He also mentioned that these issues are discussed at the expert level at platforms such as the Forum of Analytical Centres of the CICA member countries.

When it comes to Kazakhstan’s major initiatives, Kushkumbayev also mentioned the recent proposal from President Tokayev on the creation of an International Agency for Biological Safety under UN auspices and stressed that the country participates in a considerable number of international structures and processes, including EAEU, SCO, the Organization of Turkic States, CICA, OSCE, OIC and others. But the main objective, he said, is to achieve greater efficiency and effectiveness.

“In particular, for Central Asia, the format of consultative meetings remains relevant. But I think that the creation of an organization is not yet some kind of main goal. The efficiency of the process is more important and is not the point whether it will be called an organization or not. If the process really approaches some of its logical stages, then it naturally transforms,” he said.

The article was originally published in Russian on Ia-centr.ru.