NUR-SULTAN – Twenty-seven Kazakh enterprises put their products on display at the fourth China International Import Expo (CIIE) that is taking place in Shanghai from Nov. 5 until Nov. 10. 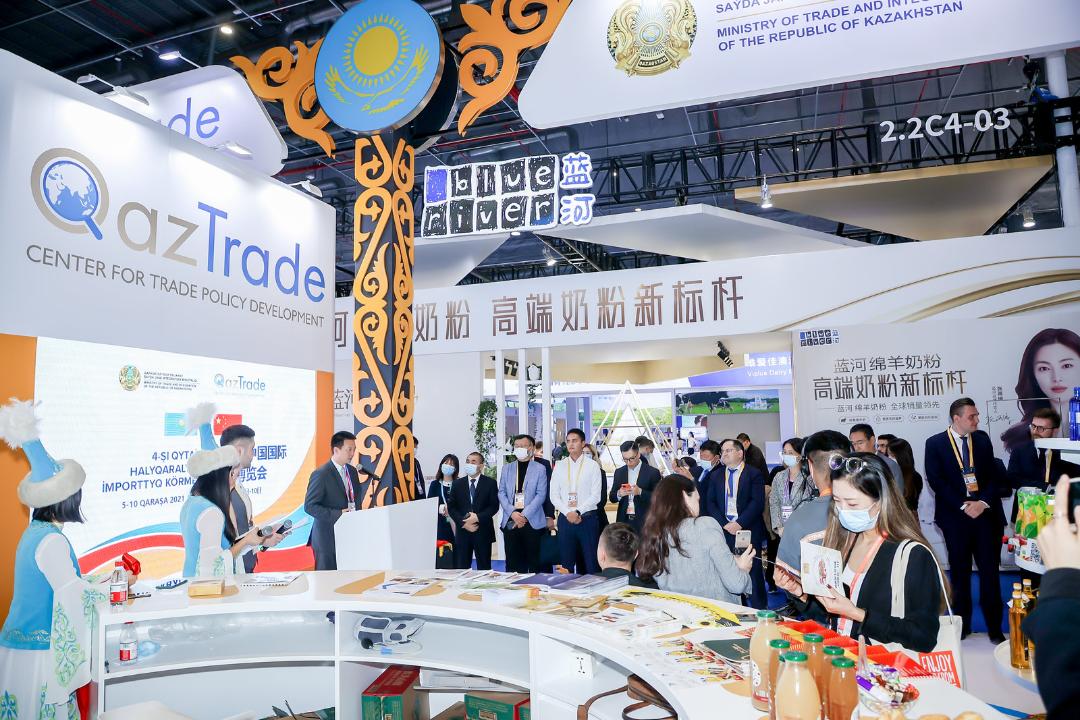 Kazakhstan’s Pavillion at the exhibition. Photo credit: Ministry of Trade and Integration

This year Kazakhstan expanded the range of products in the meat and flour industry, bakery and confectionery, as well as oil, dairy, wine and liquor products, and ice cream.

Kazakh producers took part in the exhibition with the support of the country’s QazTrade Center for Trade Policy Development established in September 2019 thanks to an initiative by the Ministry of Trade and Integration, which serves as a command point promoting and coordinating support measures for Kazakh exporters.

“We have also ensured timely delivery of our products. More than 300,000 traders will visit the site. The total value of export contracts is estimated to be more than $100 million,” wrote QazTrade CEO Azamat Askaruly in a social media post. 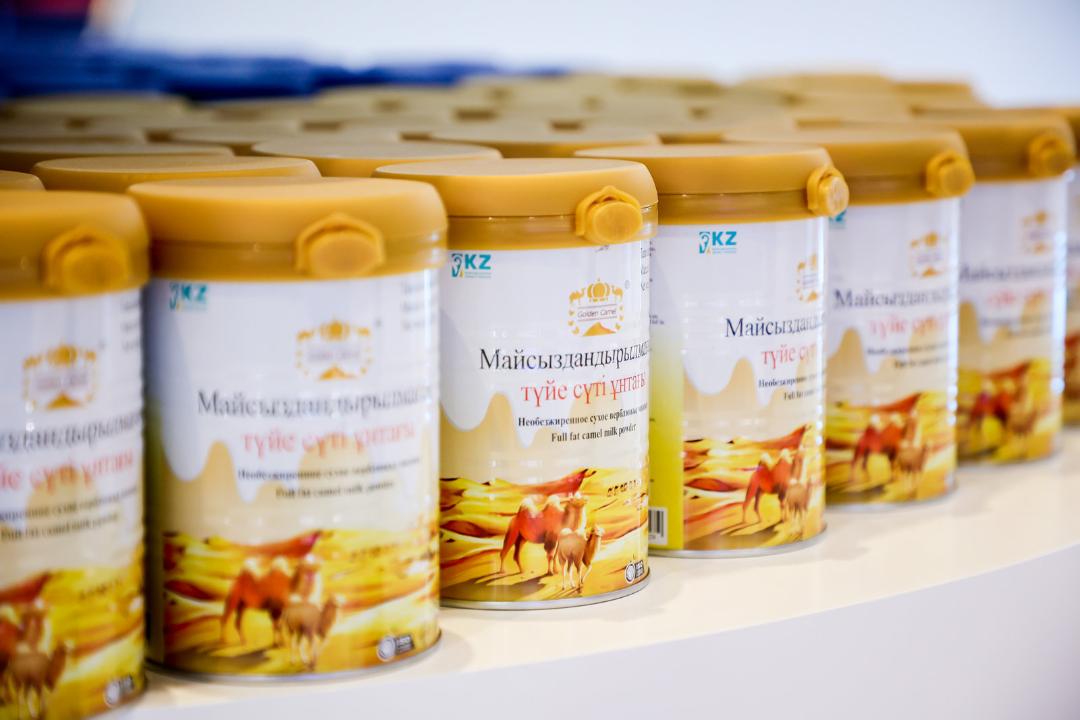 Kazakhstan debuted in the exhibition in 2018 bringing 17 companies. In 2019, Kazakhstan was represented in the national and commercial pavilions with 30 companies.

In 2020, due to coronavirus-related restrictions, 35 Kazakh producers took part in the exhibition in an online format signing contracts worth more than US$135 million.

Araltuz, Kazakhstan’s largest salt producer since 1925, is a veteran participant of the exhibition.  “This confirms our interest in entering the Chinese market,” said Araltuz Sales Director Evgeniy told Xinhua news agency. “I attended the first CIIE personally. The exhibition was really grand and covered almost all industries and types of products worldwide.”

The Kazakh Meat Processing and Service Company founder Bakhytzhan Abdrasilov also told Xinhua about his high expectations from the exhibition. His company is a major beef exporter to China with a fattening base for 3,000 head of cows and one of four companies that have been licensed and accredited in Kazakhstan to promote meat to the Chinese market.

“Our company has participated in the CIIE since 2019. At the CIIE of that year, we signed a contract of US$50 million and exported about 2,500 tons of meat in six months,” he told the Chinese news agency. 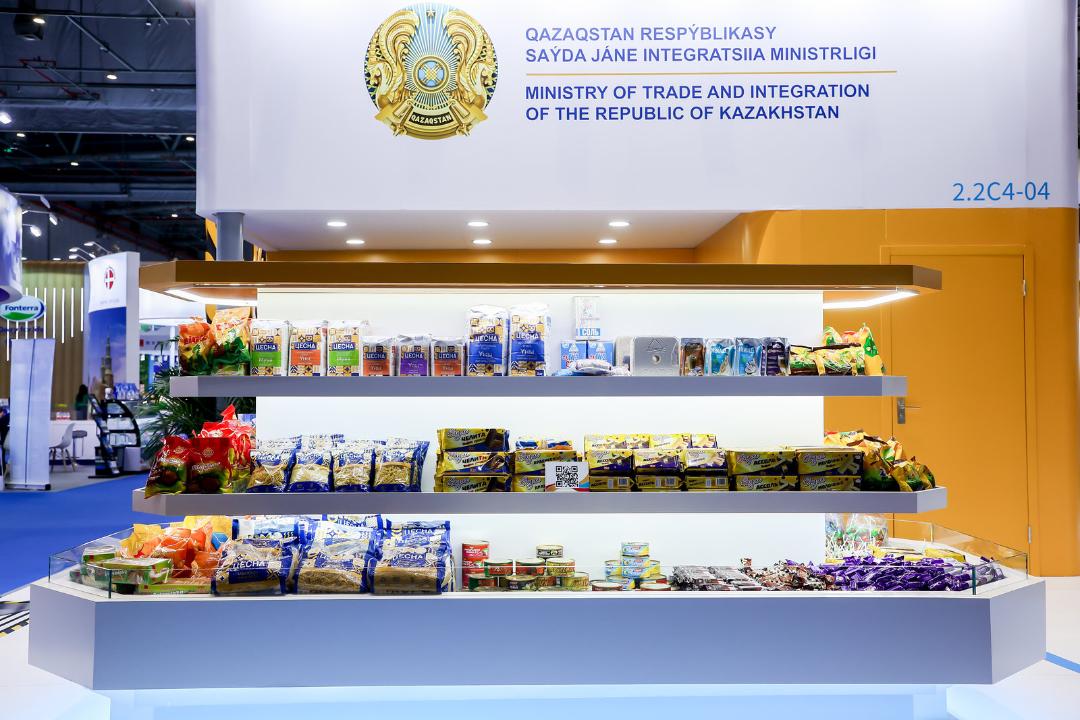 Shelves full of some of the most well-known Kazakhstan products. Photo credit: Ministry of Trade and Integration

Kazakhstan is among 127 countries attracted to the fourth meeting of the CIIE with 3,000 offline exhibitors. Three international organizations and 58 countries are participating in the Online Country Exhibition.

Joining other world leaders in the virtual grand opening of the exhibition, President Kassym-Jomart Tokayev emphasized the importance of the event in promoting trade and economic ties that have suffered from the consequences of the pandemic. He described the exhibition as a “golden gate” to China’s huge market.

Kazakhstan and China traded relatively well in 2020 despite the pandemic increasing their bilateral trade by five percent and exceeding $15 billion.

“We hope that the temporary restrictions imposed on the Kazakh-Chinese border due to the pandemic will soon be lifted and our mutual commodity flows will be fully restored,” said Tokayev in his video address.

With the launch of the Kuryk seaport on the shore of the Caspian Sea, the delivery time of goods from Khorgos to Istanbul via the Lianyungang-Kars transport corridor has decreased five times from 60 to 13 days.

“In addition to Khorgos, we are creating a new cross-border hub with neighboring countries,” said Tokayev.