NUR-SULTAN – Kazakh diplomacy is known for its unique approach to seeking solutions to many international problems, said President of Kazakhstan Kassym-Jomart Tokayev during the expanded meeting of the Ministry of Foreign Affairs on Thursday, reports the Akorda press service. 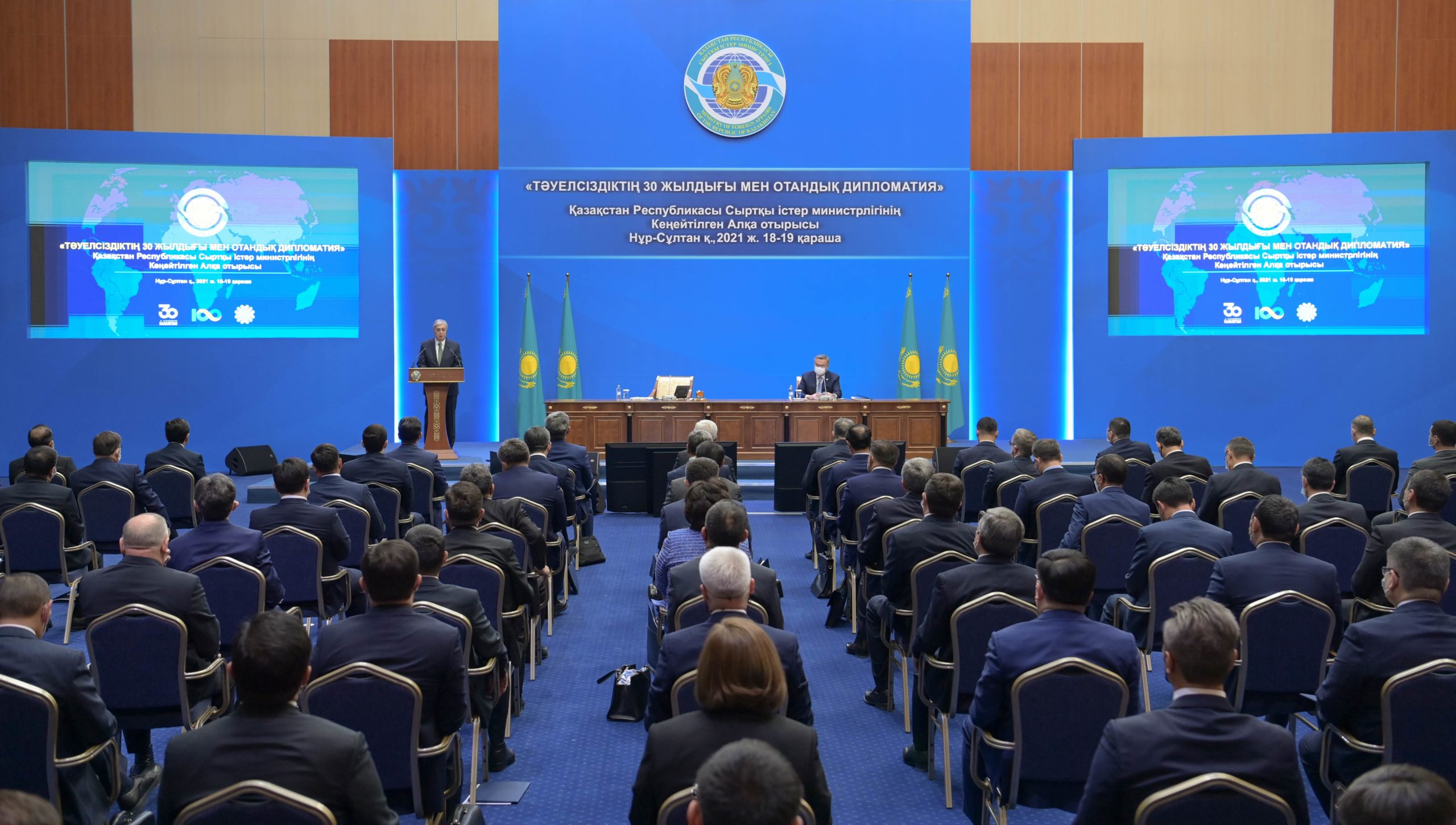 “Our country has put forward peacemaking initiatives and undertaken mediation efforts aimed at resolving interstate and civil conflicts. We seek to establish harmonious relations among civilizations and hold the Congress of Leaders of World and Traditional Religions. All this was highly appreciated and fully supported by our foreign partners,” said Tokayev.

He highlighted the upcoming 30th anniversary of independence on Dec. 16 and said that the country’s path is marked by significant achievements ranging from the legal consolidation of borders, which he described as a “truly unprecedented historic achievement” to the signing of the Convention on the Legal Status of the Caspian Sea that ended a three-decade-long dispute and the voluntary dismantling of what was once the world’s fourth-largest nuclear arsenal inherited from the Soviet Union.

Kazakhstan’s multivector foreign policy, where the country managed to establish and maintain friendly relations with strategic partners, is also among these achievements.

He emphasized that Kazakhstan was at the forefront of co-founding multilateral institutions on the Eurasian continent. “With our brotherly states, we transformed the Turkic Council into a full-fledged organization. This event marked the beginning of a new stage of cooperation among the Turkic-speaking states,” he added.

In all of these efforts, the role of civil service workers can hardly be overestimated, said Tokayev.

Tokayev praised the efforts of the diplomatic corps that assisted thousands of Kazakh citizens abroad when the pandemic began and helped them return to Kazakhstan.

“Thanks to the efforts of diplomats, Kazakhstan received humanitarian aid. For our part, we have also provided support to many countries. Vaccine diplomacy has contributed to the stabilization of the epidemiological situation in Central Asia. Despite all the difficulties, you continue to solve your strategic tasks,” said Tokayev.

While outlining the country’s achievements, Tokayev also underlined the tasks for the ministry ahead. “There is no truly unified national strategy for Kazakhstan in its external policy. This is a systemic problem. In this regard, the Ministry of Foreign Affairs should establish close interdepartmental coordination,” he said.

“I think we should boldly declare our special regional status because we have every reason to do so. Our economy is much stronger than other Central Asian economies. Our central geostrategic location is at the crossroads of key transport corridors in Eurasia. Large-scale and profound economic and democratic transformations, intellectual and human potential, high prestige on the international arena – these factors give us a special responsibility for the fate of Central Asia,” said Tokayev.

Tokayev reaffirmed Kazakhstan’s commitment to a balanced foreign policy based on pragmatism and the country’s continued respect for its bilateral and multilateral obligations.

“We will never allow any agreements that would compromise our sacred values of independence, sovereignty, inviolability of borders, and territorial integrity. Above all, we must defend the interests of Kazakhstan,” said Tokayev.