NUR-SULTAN – Nov. 16 is a significant day for Kazakh people, as they celebrate the anniversary of renowned Kazakh academic and historian Manash Kozybayev, who was born 90 years ago. Kozybayev was named “a titan of national history” by his compatriots because he filled in many blank spots in the country’s history.

He has conducted research on such sensitive issues, as mass famine in Kazakhstan in the 1930s due to forced collectivization, the heroic participation of Kazakhs in World War II and the rehabilitation of national intellectuals who were victims of political repression in the 1930-1940s.

Kozybayev also created the first historical magazine “Otan tarihy” (The History of the Homeland) in Kazakhstan and Central Asia, in which since 1998, scientists from around the world started to publish their scientific works.

Born in 1931 in the Mendikara district of the Kostanai Region, he worked in a kolkhoz, a collectivized farm, along with adults during World War II. Being a teenager, he went through severe hardship during wartime.

In 1944, Kozybayev, who had a thirst for knowledge thanks to his education at home, began to study: he first studied in the pedagogical college, then graduated with honors from the Almaty-based Al-Farabi Kazakh National University with a history degree. 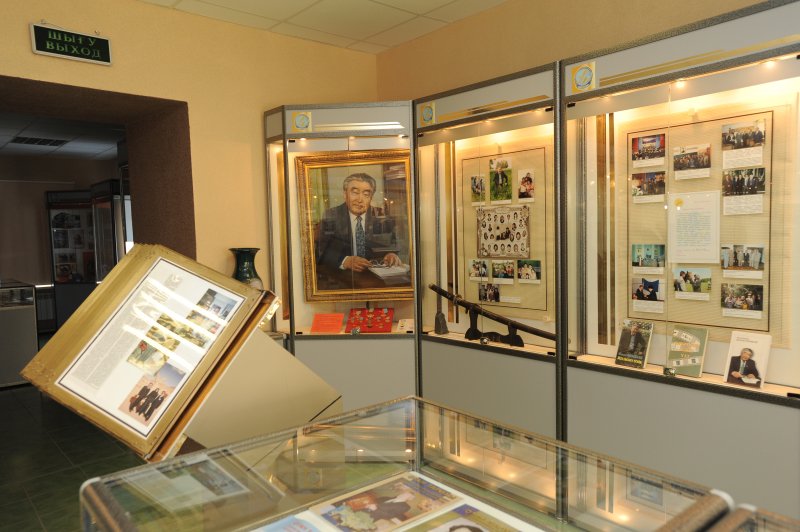 The museum of Manash Kozybayev was opened in North Kazakhstan State University in 2011. Photo credit: nkzu.kz

Although the young talented scientist could stay at the university to pursue his scientific career, Kozybaev came back to Kostanai to help his elderly parents worked as a teacher in the Kostanai pedagogical institute until the Institute of Party’s History under the Central Committee of the Kazakh Communist Party offered him a job in 1958.

In those times, he went from being a senior scientific employee to a prominent scholar receiving a Ph.D. in history.

“Kozybayev is rightly considered to be one of the first ideologists of independent Kazakhstan. He is a world-class scientist who has almost from scratch rewritten the history of the Kazakh people, which was once unrecognizably changed during the Soviet totalitarianism period. He was among the first people to talk about the rehabilitation of political repression victims,” said Kozybayev State University History Museum employee Laura Amrina as quoted by petropavltv.kz.

Thanks to his research, published in the “Questions of History” Moscow magazine in 1989, the global community learned the truth about the Kazakh people’s tragedy in the 1930s, which the scientist described as a “great disaster.” Due to forced collectivization, which was implemented in the course of the Soviet first five-year plan, the Kazakh people began to starve and die – approximately 1.75 million people died.

North Kazakhstan State University in the city of Petropavlovsk is named after Kozybayev. Photo credit: nkzu.kz

Since the second half of the 1980s, when political reforms and liberalisation started in the Soviet Union, Kozybayev carried out extensive work on the identification and rehabilitation of victims of massive political repression in the 1930-1940s, which had national significance.

He also collected, systematized, and analyzed the data about the Kazakh people’s participation in bloody battles of World War II and military units formed in Kazakhstan back then, for which he was highly appreciated at the national and all-Union level .

“The authentic history of the Kazakh people has been schematized, and important events and facts have been omitted, as have prominent historical figures whose activities didn’t coincide with the official ideology’s dogmas. The tragic pages of history were ripped out. The rich cultural and historical heritage of the Kazakh people and the role of nomadic civilizations in world history were underestimated,” said the historian, explaining why he сhose to conduct his research on history. 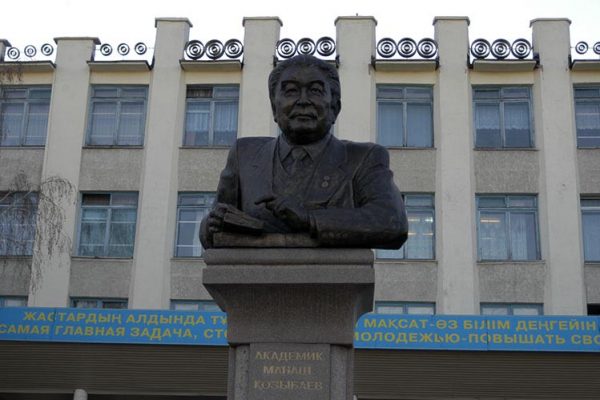 The monument of Kozybayev was intalled in Petropavlovsk. Photo credit: tuganjer.skolib.kz

Kozybayev authored more than 800 scientific publications, including 30 monographs. Fostering links of academic science with the educational system, he prepared textbooks and training manuals about Kazakhstan’s history for secondary schools and university students.

More than 60 volumes of his “Memory Book” about people, who died during World War II, and five volumes of “The Book of Sorrow” about the victims of mass political repression were published. Some of his works were translated into other languages and published in the United States, France, China, Bulgaria, among other countries.

Kozybayev, who was an Honored Scientist of the Kazakh Soviet Socialist Republic, died at age 71.

As a patriot of his people and the country, he treated history far beyond a narrow national understanding, but in the context of world history.

In his book “My Star”, which was published shortly before his death, there is an essay “Me and History”, where the author discusses the place of the historian in a fleeting life. The human can fulfill his main purpose on earth through the prism of history and comprehension of its lessons. According to him, history is the path passed by the ancestors, their victories and defeats, their spirit, “which sustains us in the moments of trial.”

To pay tribute to Kozybayev and his legacy, the government installed a memorial tablet on the house, where Kozybayev lived, and named the school in Kostanai, a street in Almaty, and the North Kazakhstan State University in his honor.