NUR-SULTAN – Nov. 2 marks 180 years since the birth of prominent Kazakh educator Ybrai Altynsarin. Despite his hardships and fate, his strive to bring progressive thinking and education into the vast Kazakh steppes remains an inspiring story of a person who cared about his own community. 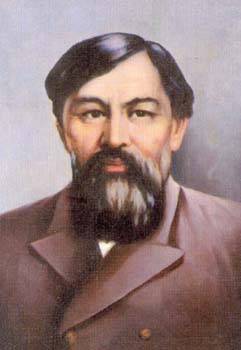 Living in the same century with some of the most outstanding figures in Kazakh history, including Abai Kunanbayev and Shokan Ualikhanov, Altynsarin left an important legacy. He wrote the first Kazakh grammar book,  introduced the transition from the Perso-Arabic alphabet to the Cyrillic alphabet for the Kazakh language, translated a large number of textbooks, but most importantly, opened Kazakh-Russian boarding schools, technical schools, and schools for girls in his village.

Born in 1841 in the Turgai district of the modern-day Kostanay Region, Altynsarin lost his father at an early age and was raised by his grandfather Balgozhi in the Islamic tradition.

Being aware of the power of education, Balgozhi, who was a respected person in his village, sent Ybrai to a Russian boarding school in Orenburg, where the educational efforts focused on instilling loyalty and devotion to the tsarist regime. In 1857, Ybrai graduated with honors and worked as a translator until August 1859.

Studying in the city helped the young man expand his worldview and better understand his people and society.

He learned even more after he met a well-known orientalist, Professor Vasiliy Grigoriev. Ibrai spent hours in Grigoriev’s library reading the works of Russian writers, educators, and books about the lives of great people.

Continuing his quest to find a place in life and to give back to his community, Ybrai returned to his village to teach in one of the newly opened primary schools. But it was not until 1864 when the school was finally opened and it turned into a much more difficult task.

“We used to say that Ybrai Altynsarin was the first teacher, opened the school, and everything was easy then. In reality, however, the country people did not understand him and there was a lack of enthusiasm from the local authorities. There was nothing – no finance, no textbooks, not even a school building. It was a real achievement on Ybrai’s part: to travel around the villages, explain, and seek sponsorship,” said Associate Professor of History at Kostanai State University Aibek Shalgimbekov as quoted by kstnews.kz.

Believing in the strong power of education against social injustice and negative human behavior, he devotes all his efforts to school work and the improvement of the children’s education system. He also paid special attention to educating Kazakh girls as a way to overturn old traditions.

The need for education is strongly reflected in his poems included in the Kazakh anthology. Some of his most famous poems are “Come, Children, Let’s Learn!” and “People with Art and Knowledge.”

Child, when you learn,

That knowledge, in the midst of total darkness

Better than a lamp, it’ll light your way

And all your dreams will come true.

And the threads of knowledge will forever shine

In our grateful memory!

Up until his death, Ybrai continued working as a school inspector spreading his passion for education. In his last years, he decides to move three kilometers away from Kostanay and builds a house near the Tobol River, where he worked until his death in 1889.

His name and legacy remain an important part of Kazakh history. Several Kazakh institutions, including the Kazakh Academy of Education, Arkalyk State Pedagogical Institute as well as streets and schools are named after Altynsarin to perpetuate his hope for a future filled with knowledge, and justice.