By Staff Report in Central Asia on 29 November 2021 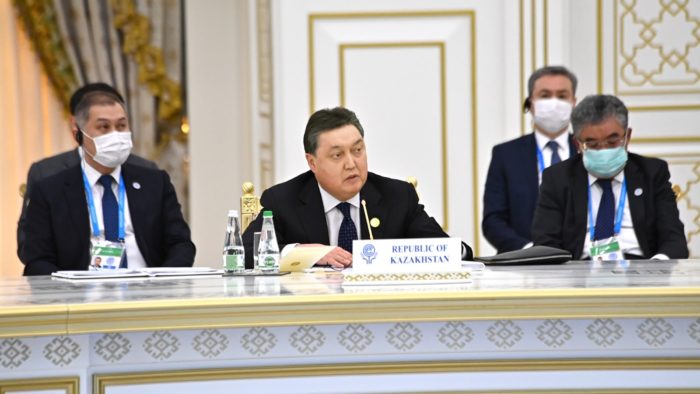 The trade turnover increased to 31 percent and reached $8.2 billion for the last nine months, which is 22 percent higher than the 2019 pre-pandemic year, reported the Prime Minister’s Office.

Mamin proposed to develop a roadmap for increasing trade and the ECO Food Security Program for developing joint production in the agri-industrial sector and expansion of the use of off-take contracts in mutual trade.

It is expected that 1 million containers will be transported through Kazakhstan to other Central Asia countries, the Persian Gulf, the Far East, and along the Trans-Caspian route until the end of this year, which is 25 percent more than last year.

“We need to develop additional, not competing transport transit corridors in the ECO space. This is one of the key conditions for increasing the stability and development of the economies of our countries,” Mamin said.

Mamin also proposed to create an ECO Transport Council to develop transport and transit policy. The joint management of transport corridor networks will increase both economic and cultural ties of the member states.

“The revival of the historic Silk Way is possible with the revival of the old economic and transport corridors between Europe and Asia through the ECO countries. The development of transit potential requires simplifying barriers and improving mechanisms for integrating logistics systems,” he added.

Despite the pandemic, trade between Kazakhstan and Turkmenistan showed a steady growth. The trade turnover increased by 43.6 percent and reached $144 million in January-September due to the growth of Kazakhstan’s exports by 78.1 percent. It is planned to increase trade turnover to $500 million in the future.

Total cargo transportation including transit to Afghanistan and Iran exceeded 1 million tons for 10 months of 2021.