NUR-SULTAN – Kazakhstan’s Zhanibek Alimkhanuly, a boxer with a 10-0 win rate and 6 KOs to his name, competed at a boxing showmatch at the Mandalay Bay Resort and Casino in Las Vegas, Nevada this past week and took home the belt, Sports.kz reports. 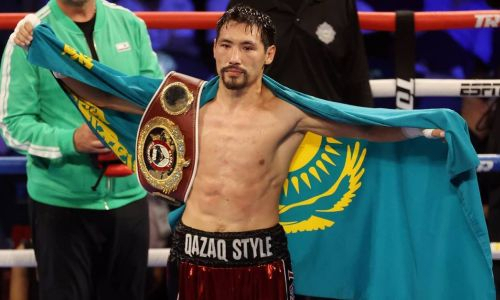 There, the 27-year-old champion fought with the former WBA middleweight champion, French boxer Hassan Ndam Nzhikam, a boxer with a 38-5 win rate and 21 KOs. The middleweight fight was scheduled for ten rounds, but came to an end sooner than that. Alimkhanuly took the title when he delivered a technical knockout in the eighth round, following up on an early knockdown in the third round.

This is the eleventh victory for Alimkhanuly in his professional career and with it, the Kazakh boxer has successfully defended his WBO Global title. This was only Njikam’s sixth defeat in the ring. Alimkhanuly is one of the most prominent rising stars in the international boxing scene at the moment and is set to leave his mark in the history of boxing.