By Zhanna Shayakhmetova in International on 19 November 2021

NUR-SULTAN – The sixth meeting of the Astana Club that took place Nov.15-17 addressed the major issues of the global economy, geopolitics and international relations, climate change and nuclear security in the post-pandemic world. 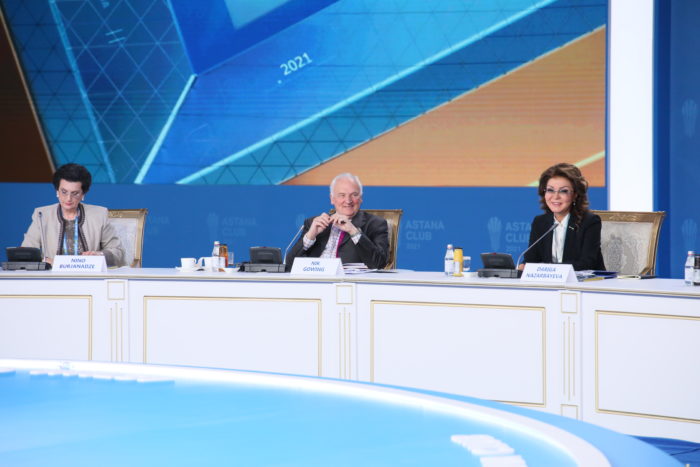 First President Nursultan Nazarbayev noted that it is necessary to develop direct contacts between the Eurasian Economic Union, the European Union, the Shanghai Cooperation Organization (SCO) and the recently created Organization of Turkic States at the plenary session on Nov.17. In this context, he proposed to create a four-sided economic forum where countries can discuss and promote all the possibilities of cooperation in Eurasia.

“I proposed to develop a plan for a comprehensive reduction of strategic arms with the participation of all nuclear states, which should be adopted under the auspices of the UN… The Global Alliance of Leaders for Nuclear Security and a World Free of Nuclear Weapons supported by 70 well-known world politicians, are of particular importance,” he said. 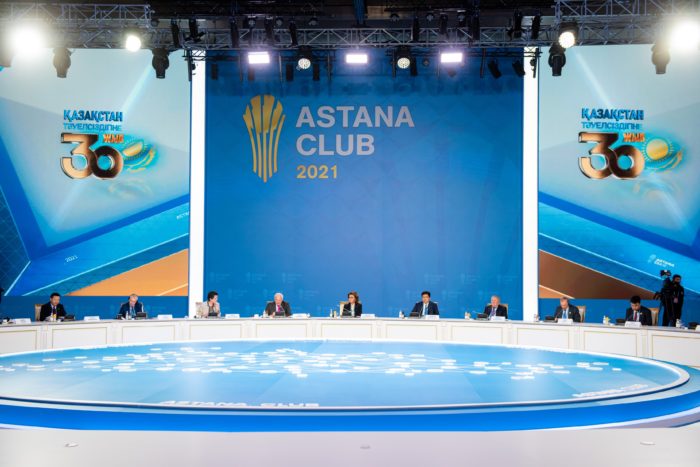 The sixth meeting of the Astana Club was dedicated to the Vision of the New World: Post-Pandemic and Beyond theme. Photo credit: Press service of Astana Club.

The experts noted that the role of Nazarbayev in promoting a nuclear-free world and Kazakhstan’s experience at the 30 Years of Independence: Nazarbayev’s Strategy and Future of Kazakhstan and Central Asia session on the same day.

Rupert Goodman, the chairman of the British-Kazakh Society and founder of the FIRST publishing house, noted that the historic decision to abandon the fourth and largest arsenal in the world allowed Kazakhstan and the Central Asian region to become a nuclear-weapon-free zone. Now Kazakhstan plays a key international role and helps to maintain stability and security in the region.

According to SCO Secretary General Vladimir Norov, Central Asia stands poised to seize new economic opportunities as the investment attractiveness of the region increases. “It is reported that foreign investment may reach $170 billion in the region and $70 billion will account for non-resource sectors in the next 10 years,” he said.

The global risks related to new mutations of COVID-19 were on the agenda of the first plenary session on Nov.15.

Director of Nursultan Nazarbayev Foundation Dariga Nazarbayeva said that the pandemic became a catalyst for fundamental changes. “There is no unity in how changes should take place. It is clear that today we need a comprehensive reboot of the dialogue in Eurasia,” she said.

Nino Burjanadze, the chairperson of the party United Georgia – Democratic Movement, also urged the nations to unite their efforts. “It is necessary to maintain international cooperation. Kazakhstan plays a major role in many cases, for example, in nuclear weapons policy. We observe a dissemination of false information about vaccination in Georgia, which worsens the pandemic. There is a need for a system like Ashyq in Kazakhstan to avoid such situations. We also need intergovernmental cooperation, we need to share best practices on the COVID-19 and coordinate joint efforts,” she added.

The experts also discussed green transformation policy at the forum.

Kairat Kelimbetov, the chairman of the Agency for Strategic Planning and Reforms and Governor of the Astana International Financial Center, invited investors both public and private to take part in the green climate development.

This year, the event gathered more than 50 influential speakers including former heads of state and government, heads of think tanks and international organizations, and the global media.

Established in 2015, the Astana Club has become a global platform that unites the leading experts in addressing the complex issues. The Astana Club meetings are held according to Chatham House rules, which grants anonymity to expert opinions expressed during the discussions.