Unity in Diversity is Our Fundamental Principle to Preserve National Unity, Says Tokayev

NUR-SULTAN – Unity in diversity is Kazakhstan’s fundamental principle for preserving and strengthening national unity and a key principle that the country is committed to adhering to in the future, said President Kassym-Jomart Tokayev as he chaired an expanded meeting of the Assembly of People of Kazakhstan on Oct. 22, reports the Akorda press service. 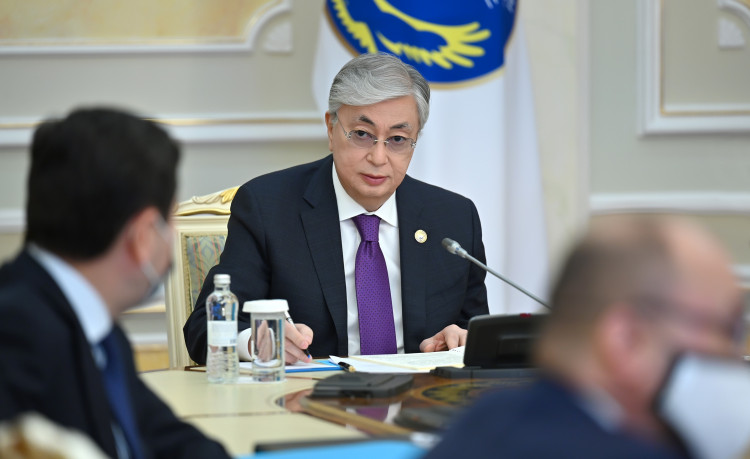 “Kazakhstan is home to a variety of ethnic groups. This is a well-known fact, and in fact, it is our destiny. Different cultures are developing together in our country. As a result, our potential is growing and our unity is strengthening. We must promote patriotism, mutual respect, and peace.  National unity is the main guarantee of a strong state,” said Tokayev addressing the Assembly members in a virtual format.

Founded in 1995 at the initiative of First President Nursultan Nazarbayev, the assembly is a constitutional body aimed at strengthening the ethnic accord in the country and ensuring all rights and freedoms of citizens are observed regardless of one’s ethnic affiliation.

Regional development based on equality of opportunities, improvement of the efficiency of local executive bodies, prevention of conflicts, and strengthening of the role of the assembly in supporting social projects were among the priorities outlined by Tokayev in his remarks.

He emphasized the role of the assembly in preserving the stability and ethnic accord in the country despite the predictions of many that Kazakhstan would see ethnic conflicts rising following the collapse of the Soviet Union.

“For many ordinary people and even experts, their predictions seemed reasonable, especially amid inter-ethnic conflicts that raged across the former Soviet Union. However, all together, as one nation, we were able to prove the invalidity of these pessimistic predictions, and the Assembly has played an important role in this – it has become an institution of national solidarity and a symbol of national unity,” said Tokayev.

To strengthen its role, Tokayev noted the importance of regional development based on the principles of equal opportunity.

“World practice shows that the compact residence of ethnic groups contributes to their socio-cultural isolation. This leads to the emergence of ethnic enclaves, cultural and linguistic barriers, leading to increased inter-ethnic tension and even to conflicts. Given this negative experience in the world, we need to develop systematic measures to overcome the negative trend of the formation of closed ethnic districts and neighborhoods in rural areas and cities of our country,” said Tokayev.

The problems of regional development must be considered, treating achievement of harmony between ethnic groups as a priority.

He also spoke about the importance of specialists in the field of interethnic relations in each regional akimat (city administration).

“This work should be carried out, first of all, in areas with different ethnic composition and densely populated ethnic groups,” said Tokayev.

The Kazakh Ministry of Information and Social Development conducts regular examinations of interethnic relations and has developed approaches to respond effectively in case of an ethnic conflict.

“It is also necessary to provide all support to civil society institutions to strengthen peace and harmony. Relevant officials are directly responsible for the coordination of their activities. Negligence and mistakes should not be allowed in this area. Everyone should keep this in mind,” said Tokayev.

At the same time, officials should have zero tolerance for conflicts on ethnic grounds, any manifestations of ethnic pride, discrimination, attempts to undermine the public order and stability on this basis.

“We need to actively use the opportunities of social and legal institutions, in particular, mediation. Practice shows that the most effective format for ethno-mediation in our conditions is that of professional negotiators. I believe that the Assembly should become the key body in this area,” said the President.

Besides other priorities, the Assembly should also start supporting projects of social significance and accelerate awareness-raising work.

“Online media and social networks have become an important means of disseminating information. Leaders of the region should be active in the information space as the heads of the local assembly. Members of the Assembly must also be able to stand for their position in the media, including on social media, and respond to every word spoken against the unity and peace of our country,” said Tokayev.