By Assel Satubaldina in Culture, Kazakhstan Region Profiles: A Deep Dive Into the Heart of Central Asia on 22 October 2021

NUR-SULTAN – President Kassym-Jomart Tokayev visited the Zhoshy Khan historical and cultural complex in Ulytau District as part of his working visit to the Karaganda Region, reports the Akorda press service.

The center serves as a tourist destination that takes visitors into the ancient Kazakh past and aims to become a scientific center for studying the era of the Golden Horde, a medieval multinational state also known as the Ulus of Jochi, Ulug Ulus, or the Kipchak Khanate. The Horde was first formed in the 13th century and is a historical predecessor of the Kazakh Khanate. The increased examination of the Golden Horde legacy is prompted by Tokayev marking 2019-2020 as a commemorative period to celebrate the 750th anniversary of the Golden Horde. 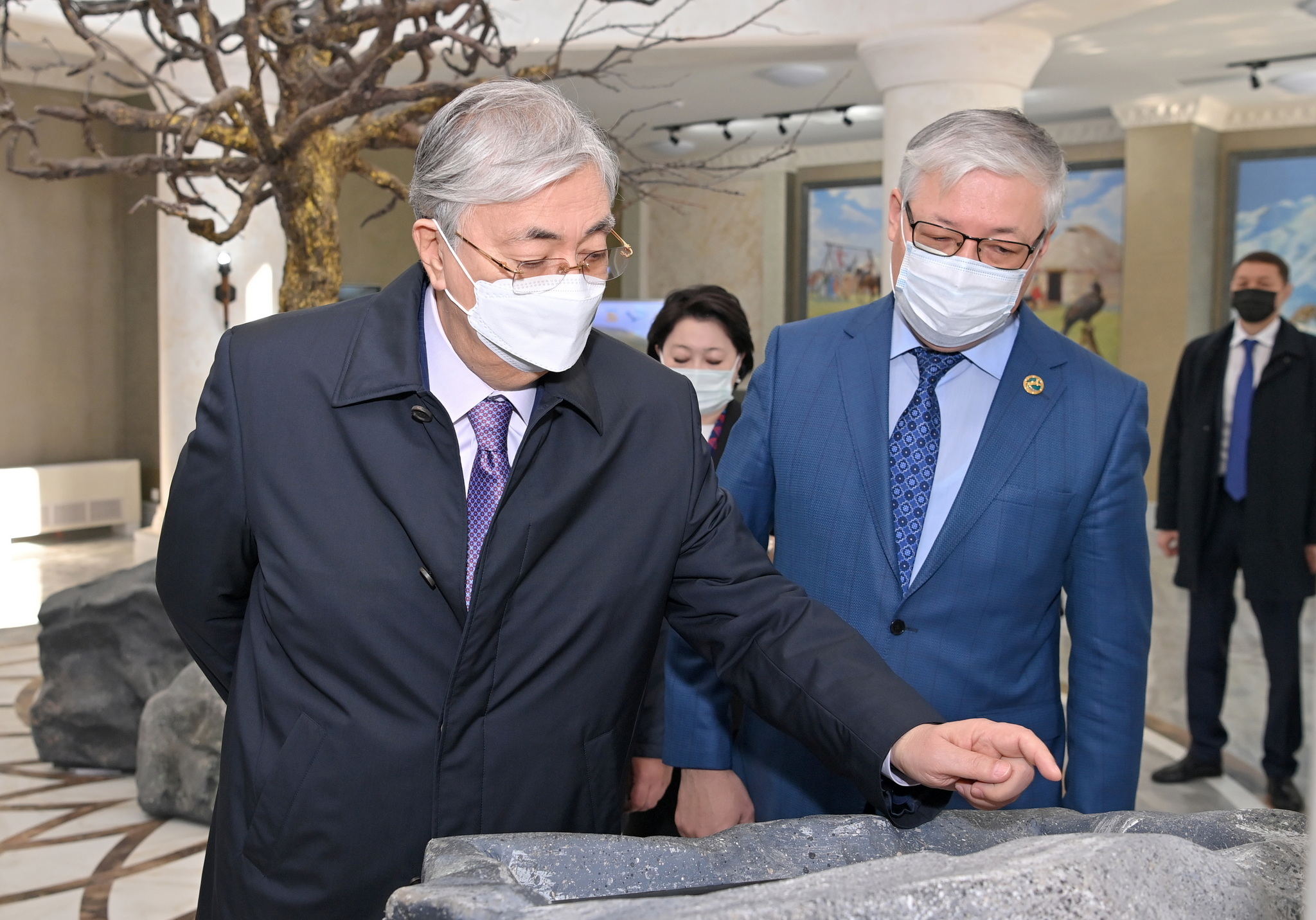 The complex, which spans across an area of 2,500 square meters, is named after Jochi Khan (Zhoshy Khan in Kazakh), the eldest son of Chinggis Khan and a Mongol army commander who was known to be a participant in his father’s conquest of Central Asia. According to historical records, his stavka, or headquarters, were based in the Ulytau, a low-altitude mountain range and the vast steppe lands located some 50 kilometers from the town of Zhezkazgan.

The area is rich in ancient mausoleums, petroglyphs, and monuments, and the smell of wormwood all around Ulytau is reminiscent of ancient times. Built in the 13th century, the blue-domed mausoleum of Jochi Khan is among the first places to visit in Ulytau.

The new complex honors the memory of the Jochi Khan with valuable exhibits displayed in the complex, including the museum, monument to the khan, the tent city, and a hotel.

Tokayev said that researchers and scientists should focus on studying this sacred historical site. Back in 2019, when participating in the Ulytau International Tourism Forum, Tokayev described Ulytau as a “sacred cradle of the Kazakh people, a symbol of the unity of the nation and a fierce struggle for independence.”

During his visit to the complex, Tokayev suggested organizing an international conference next year devoted to the Golden Horde with the participation of international and local researchers. 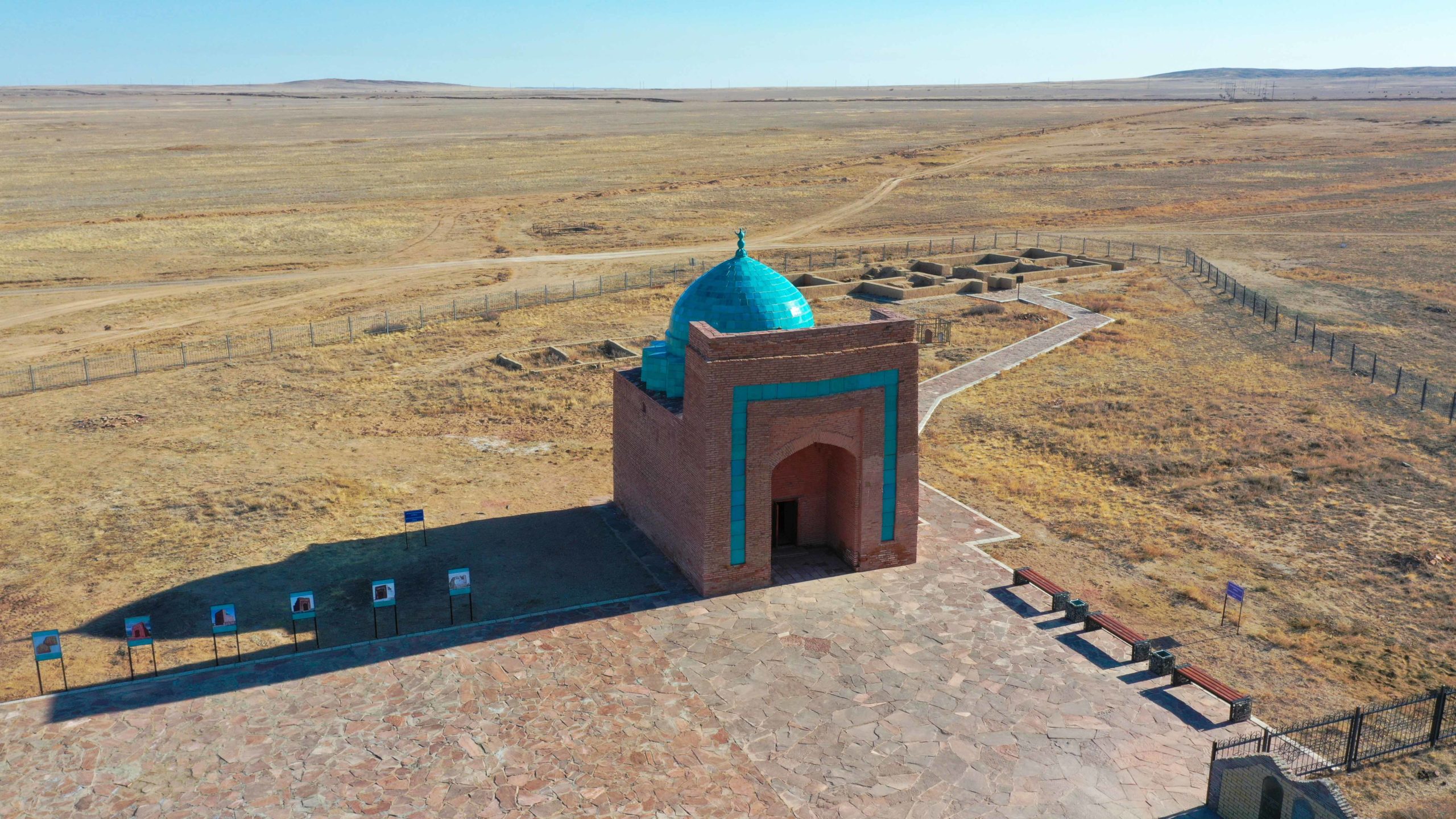 The Mausoleum of Zhoshy Khan is one of the most prominent sights in the region and is considered to be a sacred place. Photo credit: akorda.kz.

The development of tourism potential in the region is also a priority voiced by Tokayev. Karaganda Region Akim (Governor) Zhenis Kassymbek briefed the President on the region’s plans to develop resort areas and historical and cultural complexes that include strengthening the tourism opportunities in the Ulytau, and Karkaraly districts as well as Balkhash city.