By Saniya Bulatkulova in Society on 8 October 2021

NUR-SULTAN – Haji Allahshükür Hummat Pashazade, Sheikh Ul-Islam and Chairperson of the Caucasus Muslims Board, has been recognized as an Honorary Professor of the Gumilyov Eurasian National University during his visit to Kazakhstan as part of the 19th Session of the Secretariat of the Congress of Leaders of World and Traditional Religions, which was held on Oct.5-6. 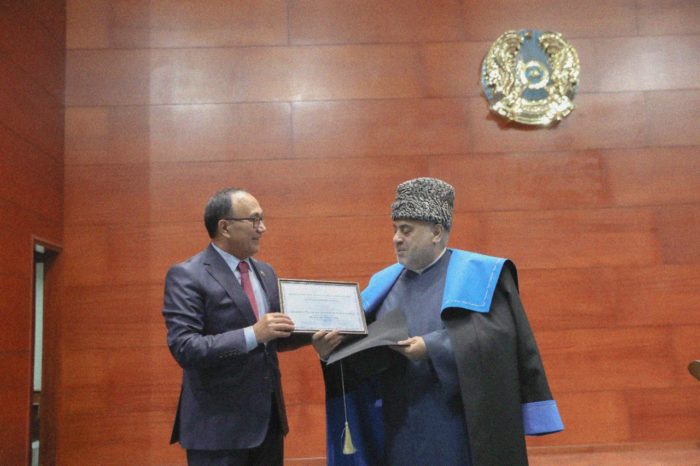 Being a Member of the Muslim Congress and Co-Chairman of the Interfaith Council of the Commonwealth of Independent States, Pashazade also delivered a lecture to university staff and students on Oct. 7.

During his lecture Pashazade expressed his pleasure at the interactions with the students as it was productive.

“First President of Kazakhstan Nursultan Nazarbayev launched an initiative of congress establishing 18 years ago, and I consider this decision to be very timely and wise. I am sure the idea of such meeting hosting features prominently, because there are not only religious leaders, but also politicians and public figures. They discuss all together the global challenges and ways of overcoming. This synthesis of cooperation and energy shows we are moving in a right way and makes this platform effective,” he said.

He also stressed the importance of preserving and developing brotherly ties between two turkic peoples – the Kazakhs and Azerbaijanis, which were built during the USSR: “This solidarity has been particularly strong and significant over the past 30 years. When Azerbaijan was going through difficult times, countries such as Turkey and Kazakhstan supported it on all levels and on the international stage.”

He concluded, “When I entered the university, I felt proud to belong to the oldest turkic roots. I visited the museum, which truly impressed me. We are bound together by the strongest ties – a common religion, a common language and a common culture.”

Additionally, Pashazade held a meeting with State Secretary of Kazakhstan Krymbek Kusherbayev. Both sides agreed that in the context of new global challenges, including religious extremism, country leaders have to develop an effective strategy for conflict resolution and create a common space for the harmonious coexistence of different religions and nationalities. Kusherbayev expressed his gratitude to Sheikh Ul-Islam for continious active participation in the work of the Congress of Leaders of World and Traditional Religions.

The seventh Congress of the Leaders of World and Traditional Religions will be held Sept. 14-15 in 2022 in Nur-Sultan.