By Staff Report in International on 30 September 2021

NUR-SULTAN – Turkistan hosted the tenth session of the Parliamentary Assembly of Turkic-speaking countries (TURKPA) on Sept.28. The event also marked the handover ceremony of the TURKPA chairmanship from Azerbaijan to Kazakhstan. 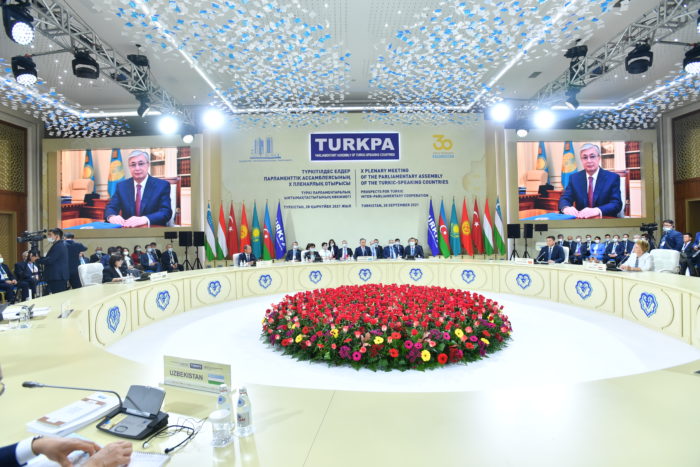 Kazakh President Kassym-Jomart Tokayev said that the development and strengthening of interaction between the Turkic-speaking countries are of great importance in his address delivered by Chairman of the Majilis (lower chamber of Parliament) Nurlan Nigmatulin.

Tokayev noted that TURKPA, initiated by Kazakhstan’s First President Nursultan Nazarbayev, has become an authoritative organization that strengthens the unity of the Turkic countries.

“It is necessary to strengthen mutual cooperation, enhance the potential of our partners and strengthen the role of the Turkic-speaking countries in the international arena in the light of new challenges,” Tokayev said. “A unified position matters in connection with global and regional issues. TURKPA plays a special role. Our parliaments should solve issues considering the unity of the Turkic peoples.”

Kazakhstan will continue to further strengthen inter-parliamentary cooperation and increase its international authority, Nigmatulin said in his opening remarks.

Kazakhstan is committed to increase the number of countries participating in the assembly and to focus on activities in the field of education and culture within the TURKPA.

An expansion of Kazakhstan’s Turkistan 24 TV channel to all Turkic-speaking countries was proposed.

The Turkistan Declaration of the tenth session of the Parliamentary Assembly was also adopted at the meeting.

The next session of TURKPA is scheduled in Kyrgyzstan for 2022.

Speaker of the Grand National Assembly of Turkey Mustafa Şentop, Chair of the Milli Majlis of Azerbaijan Sahiba Gafarova, Chairman of the Jogorku Kenesh of Kyrgyzstan Talant Mamytov, Deputy Speaker of the Legislative Chamber of the Oliy Majlis of Uzbekistan Ulugbek Inoyatov and representatives of Turkic cooperation organizations all took part in the meeting.

On Sept.29, President Tokayev also met with Chair of the Milli Majlis of Azerbaijan Gafarova in the Kazakh capital, according to Akorda Press.

TURKPA was established in 2008, according to an agreement signed by Azerbaijan, Kazakhstan, Kyrgyzstan, and Turkey. The organization aims to assist in the development of political dialogue between the countries, and strengthen mutual cooperation on the basis of shared historical, cultural, and language unity.