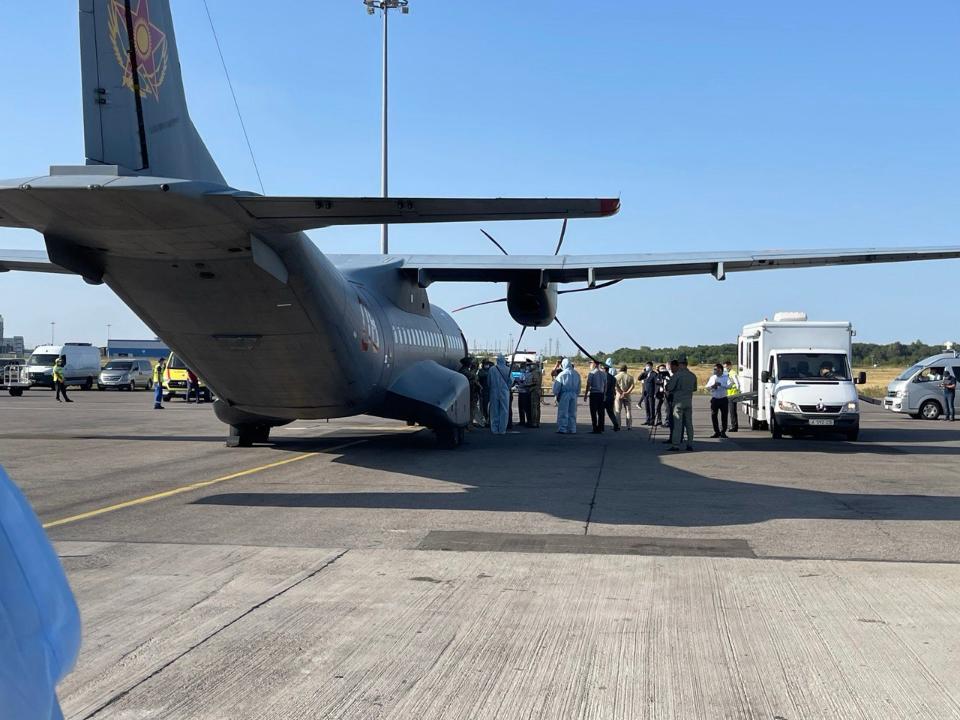 The plane with people who have been evacuated. Photo credit: Kazakh Defense Ministry

“On board were 25 Kazakhs, 10 of whom were children, 14 Kyrgyz citizens who had been evacuated at the request of the Kyrgyz side and one person each from Russia and Lithuania. The Kazakh Defense Ministry received the list of evacuees through the Office of the Defense Attaché in Afghanistan in coordination with the Kazakh Ambassador Extraordinary and Plenipotentiary in Kabul,” reports Kazakhstan’s Hola News.

The evacuation meant the Kazakh security personnel had to come to an agreement with different sides in the field, said Karin.

The evacuation meant the Kazakh security personnel had to come to an agreement with different sides in the field.

After the situation in Afghanistan began escalating with the takeover of major regions, including Kabul, by the Taliban, President Kassym-Jomart Tokayev convened two emergency meetings to discuss the situation. He then tasked the government and the security forces to ensure a safe return of Kazakh citizens and diplomats to Kazakhstan.

Karin said all citizens were evacuated to Kazakhstan by Aug. 18.

“Our military officers and diplomats have gained good experience in conducting similar humanitarian operations back during the pandemic when we had to urgently evacuate our citizens from various countries in the spring of 2020, and shortly before that during the Jusan operation,” said Karin.

President Tokayev has repeatedly spoken about the situation in Afghanistan in his public appearances, including in his Sept. 1 state-of-the-nation address.

The Kazakh Foreign Ministry said Kazakhstan continues to closely monitor the developments on the ground.

“Kazakhstan calls on all parties involved to ensure the peaceful transition of power as the main prerequisite for internal stabilization. We support the statement of the UN Security Council on establishing an inclusive and representative government, respecting the rights of national minorities and women, avoiding the presence of groups that pose a threat to other nations, and respecting international law,” said the ministry in a statement as of Aug. 19.

On Aug. 30, the United Nations Security Council passed a resolution where it called for the Taliban to “facilitate safe passage for people wanting to leave Afghanistan, allow humanitarians to access the country, and uphold human rights, including for women and children.”

For many women in Afghanistan, the return of the Taliban raises concerns and fears that their rights could be curtailed, as they were during the Taliban’s rule in 1996-2001. Back then, women and girls were barred from working and studying.

Martin Griffiths, Under-Secretary-General for Humanitarian Affairs and Emergency Relief Coordinator for the United Nations, met with Taliban officials on Sept. 5 emphasizing the critical role of women in the delivery of aid and calling on all parties involved to ensure their rights and that all civilians are protected “at all times.”

In his Aug. 31 statement, UN Secretary-General Antonio Guterres said a humanitarian crisis is looming in Afghanistan. Half of the country’s population – 18 million – is in need of humanitarian assistance.

“More than half of all children under-five are expected to become acutely malnourished in the next year. People are losing access to basic goods and services every day. A humanitarian catastrophe looms,” said Guterres.