By Saniya Bulatkulova in International, Kazakhstan’s Independence: 30 Years on 17 September 2021

NUR-SULTAN – The 17th Eurasian Media Forum (EAMF) gathered experts from 25 countries, who are competent in economics, politics, ecology, education and media to discuss the most relevant issues facing journalism today. The first and the second sessions held on Sept. 16 were dedicated to the 30th anniversary of Kazakhstan’s independence and how the pandemic has changed the world. 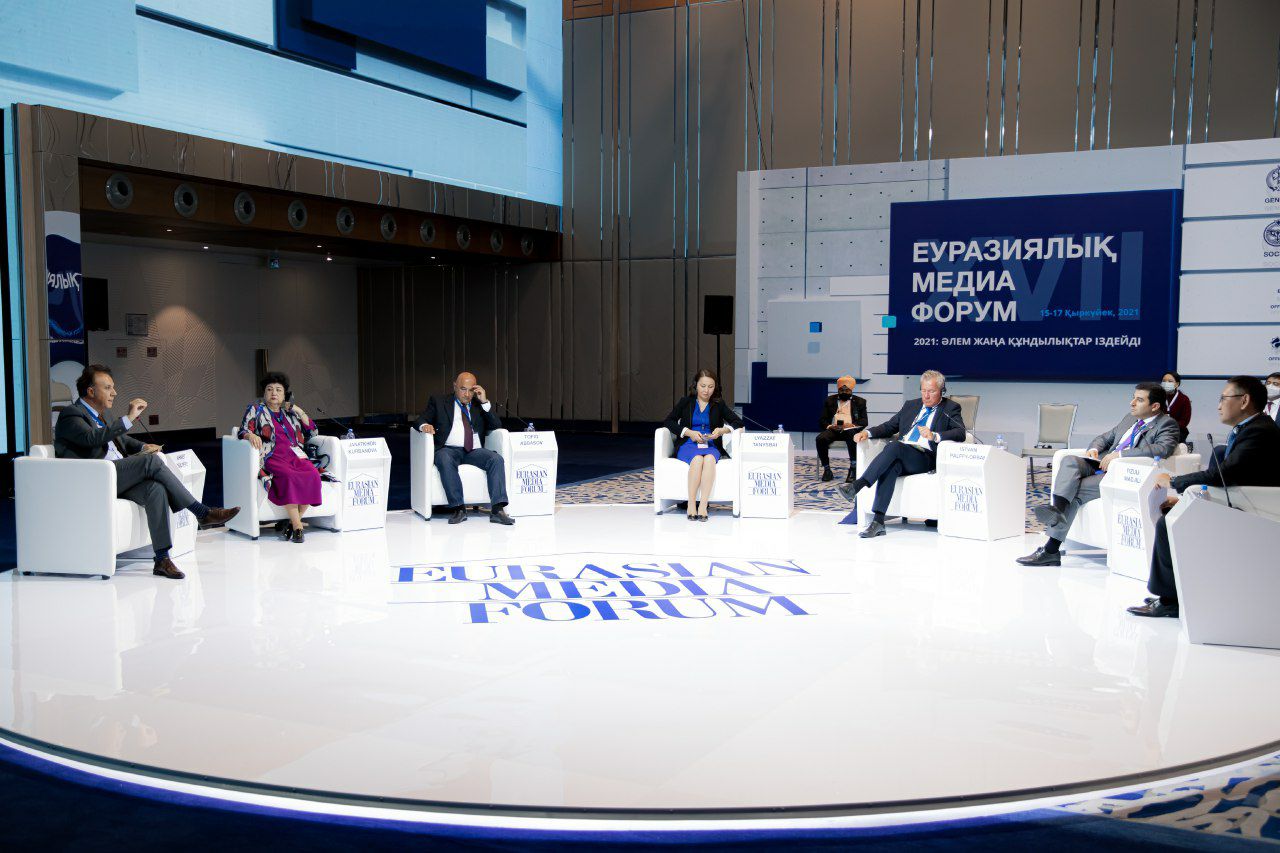 The opening ceremony began with the welcoming address from President of Kazakhstan Kassym-Jomart Tokayev.

“Kazakhstan is always interested in promoting a constructive agenda and is ready to implement collaborative projects in all fields, including the media and creative industries. I wish all participants of the forum success and productive work,” he said.

EAMF organising committee chair, Kazakh state and political figure, Dariga Nazarbayeva noted that Kazakhstan has always helped neighbouring brotherly countries in difficult times, sharing food, grain, fuel and technical equipment. Ms Nazarbayeva shared her concerns about the situation in Central Asia: “Kazakhstan is concerned about what is happening in Afghanistan. At the media forum, the topic of the peaceful resolution of the problems of that long-suffering country was at the forefront many times.”

She expressed confidence that the media forum would become an important platform for the dialogue and understanding. She also said the forum allowed people to see the new face of Kazakhstan. 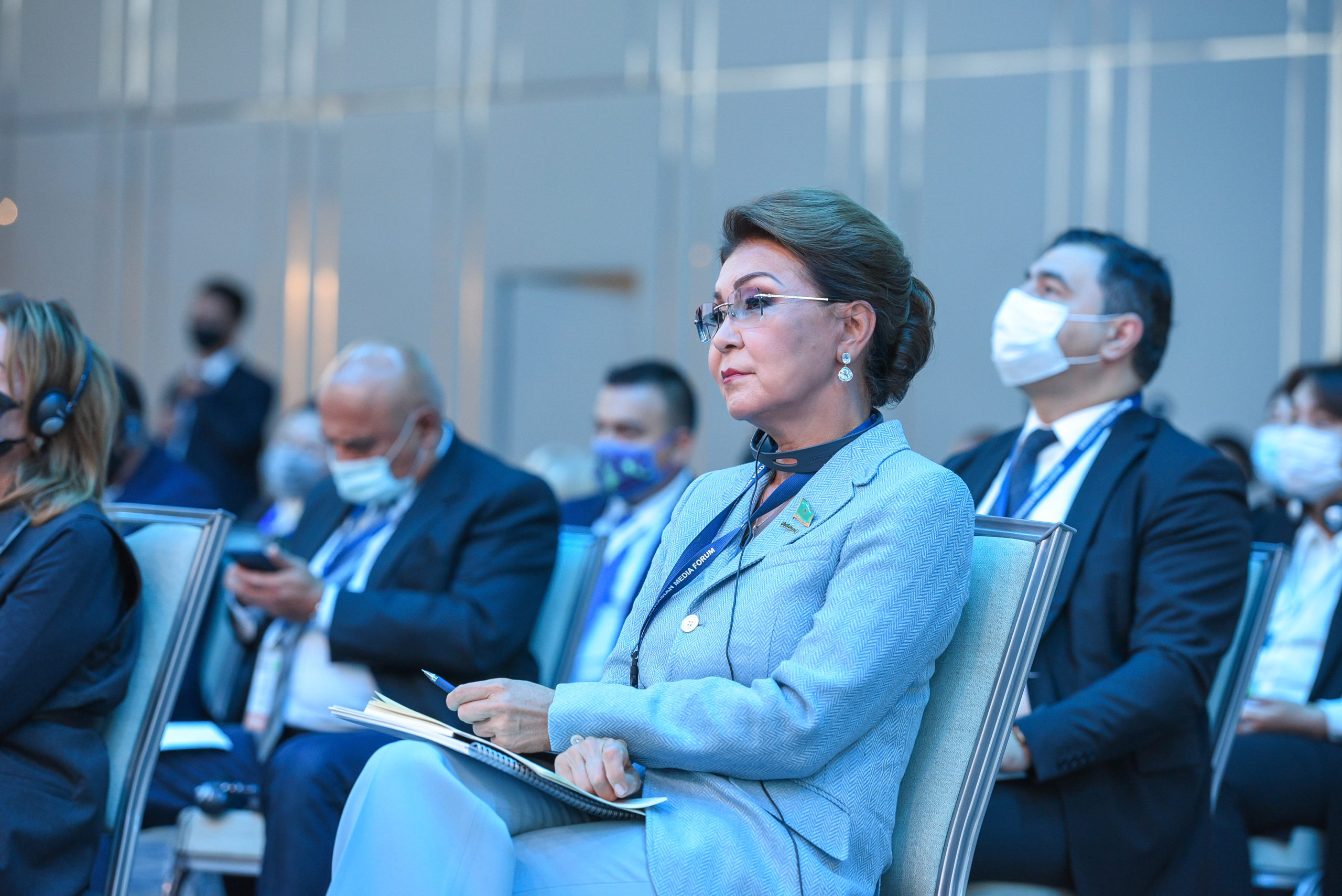 Maulen Ashimbayev, Chairperson of the Senate of the Parliament of Kazakhstan, agreed with Nazarbayeva and outlined the many changes made over the last 30 years: state institutions and public administration systems have been established, borders have been delimited, a new capital has been built, and a Bolashak international educational scholarship has been dedicated.

“Over the past two years, Kazakhstan has undertaken comprehensive political reforms. The law about rallies had been liberalized, which emphasizes the state’s willingness to accept an alternative view and provide the necessary facilities for its public demonstration. The opposition was guaranteed to have rights in the Parliament, women and young people were allocated a 30 percent quota in party lists for elections to the Majilis and local representative bodies,” he said.

Among the speakers was also Yakup Beris, UNDP Permanent Resident Representative in Kazakhstan. He said that he cannot describe all of the country’s achievements in just one speech.

“Today, the duration of education in Kazakhstan has increased by 3.8 years, which means children spend more time in educational institutions and receive a comprehensive and high-quality education. Average life expectancy has increased by 6.8 years in comparison with the 1990s, and the national economic product has also increased since those times.”

He continued, “Market and social reforms were adopted and social public service was constructed. Today, we have a group of well-developed countries in terms of human capital development, and Kazakhstan is a member of that group. That is the country’s achievement in the international scene.” 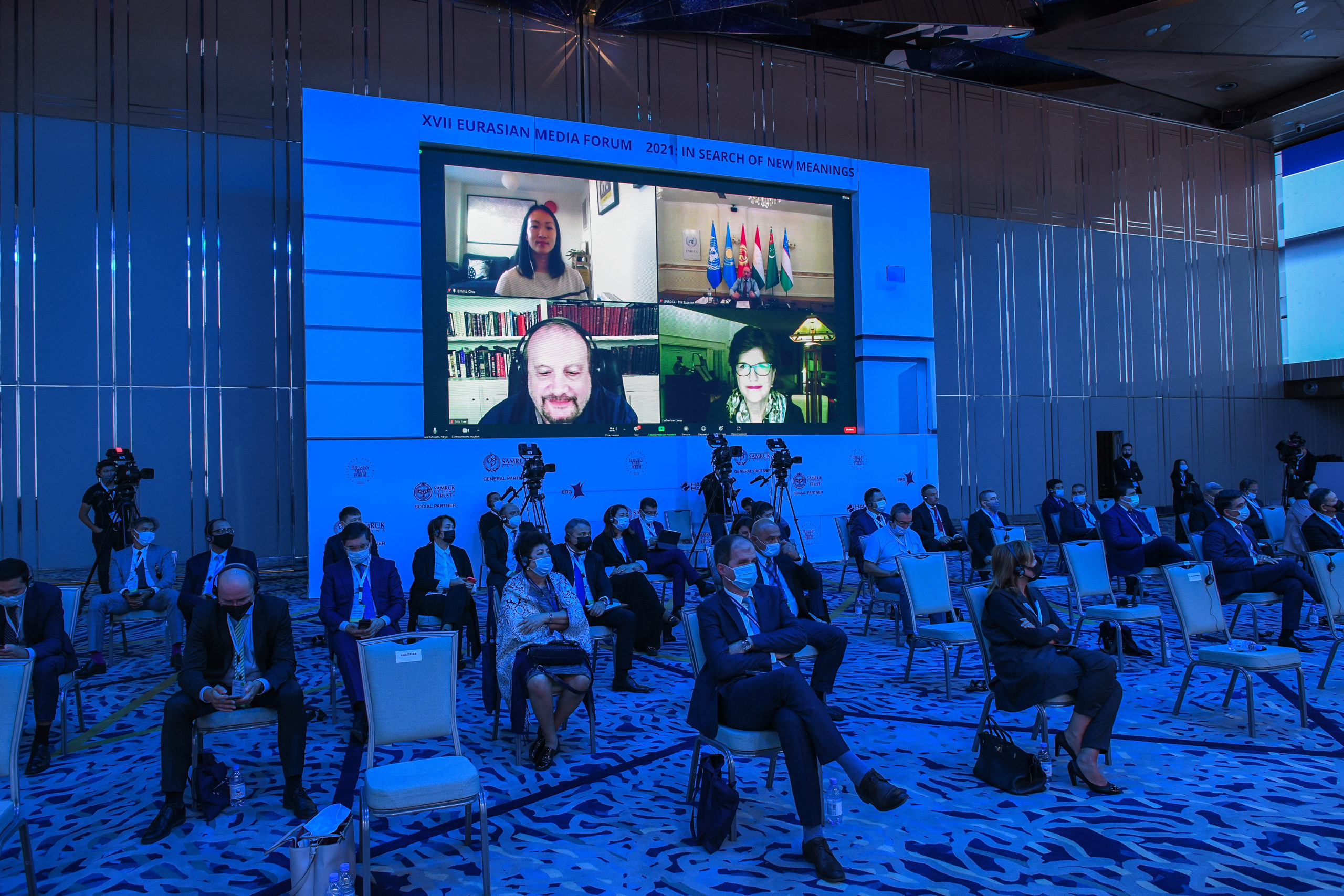 The first and the second sessions held on Sept. 16 were dedicated to the 30th anniversary of Kazakhstan’s independence and how the pandemic has changed the world. Photo credit: EAMF press service.

The discussion about the pandemic’s impact on people’s lives across the globe and how it defined new paths of global coexistence was started by Aida Balayeva, Minister of Information and Social Development of Kazakhstan.

She said that due to new information technology, the world was able to comply with quarantine measures and institute lockdowns without much damage to its governability. Despite this, the coronavirus death toll exceeded 4 million people.

The pandemic has reduced transport links between countries and continents. However, thanks to these new information technologies, we have not lost contact with the outside world, instead simply transferring these contacts into virtual space. The world reacted immediately to the new conditions.

Above other things, the pandemic had a significant impact on the economy. Information has become an essential tool in the fight against coronavirus. The media was at the forefront, broadcasting expert opinions, creating various videos, and making special broadcasts. They were aimed at explaining both state strategy and individual responsibility for public self-preservation.

Michael Favorov, Doctor of Medical Sciences, Epidemiologist, Expert in Control and Prevention of the Infectious Disease Spread, said the pandemic can be controlled with the judicious use of clinical medicine and public healthcare.

He is sure the pandemic has demonstrated that the decision making process was postponed by the crisis. All the decisions made during the course of the pandemic are based on negotiations, but they are not based on scientific-researched analysis.

“Globalization has increased the affectivity and influence of informal organizations. Dilettantism, non professionalism, the infantilism of anti-vaxxers, the informational revolution in particular, in the times of pandemic when we try to avoid any contacts resulted in the strengthening of these network structures. We are very often not aware of these structures: various medical experts, fake new prejudices, conspirology theories… These groups, unfortunately, very often dominated the discussion in comparison to official scientific circles,” he added.