By Dmitry Babich in Kazakhstan’s Independence: 30 Years, Op-Ed on 3 September 2021

The state-of-the-nation address is a very special genre of public speech. The heads of states of many countries follow the American prototype and imitate the US presidents, repeating the usual speech patterns about democracy, new technologies and empowerment of the people. Others follow the more authoritarian “nativist” speech patterns, emphasizing loyalty to tradition, faithfulness to the motherland and conservative values. 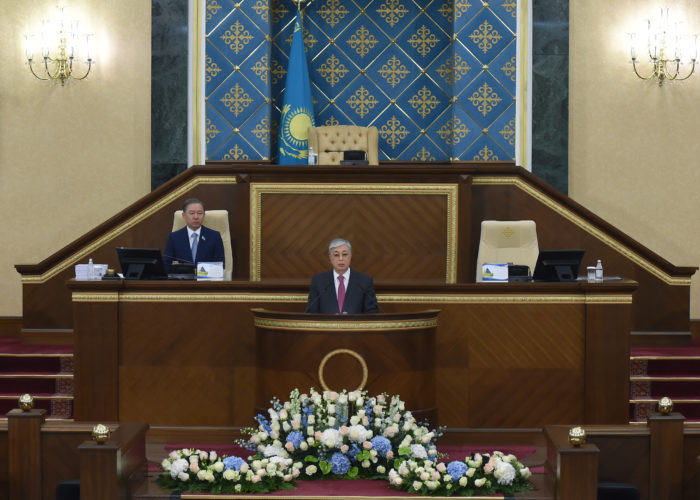 But stereotypes don’t work in Kazakhstan, a country of contrasts, and President  Kassym-Jomart Tokayev’s Address for 2021 was tailor-made for Kazakhstan, making it vastly different from both American and post-communist templates. The address, titled “Unity of the people and systemic reforms are a solid foundation for the nation’s prosperity,” panned out as a truly special state-of-the union speech.

Where else can one find the topic of education coming in the president’s speech in the first few paragraphs, immediately following the unavoidable latest news about the fight against COVID? Where else is “green hydrogen” cited as a way forward for the country’s energy industry in a country that has been raising itself out of Soviet poverty by relying on some of the richest oil and coal reserves in Eurasia?  Where else are students invited to Ivy League colleges in the US, while 40% of the population still lives in the countryside? But this is Kazakhstan, and this is Tokayev’s way: congratulatory notes are scarce in his speeches, and they usually come at the end. Problems and the ways to solve them always come first in the President’s addresses. And this year was no exception.

Kazakhstan is indeed a country of contrasts, and this was reflected in the President’s speech. It is the most industrially developed country in Central Asia, and probably the only one which managed to preserve good, respectful diplomatic relations with both Russia and the Western countries, including the US and the EU. But President Tokayev does not dwell long on this achievement: in his speech he set the goal of strengthening Kazakhstan’s position as a leader not only in Central Asia, but also in a wider international context. This will entail strengthening Kazakhstan’s position in the global economy, of which Kazakhstan has already become an integral part.

Kazakhstan is in possession of probably the best economic record in the Eurasian part of the former Soviet Union now, soundly outdoing its Central Asian neighbors, Ukraine and in many respects showing better results than Russia and Belarus. For the first time in Kazakhstan’s history, in the year 2020, processing industries made a greater contribution to the GDP than those industries, which extract the country’s natural  resources (oil, gas, coal, uranium, etc.). The Tenge is the most stable currency in the region. But Tokayev set forward a new goal: to return the rate of inflation to the pre-COVID 4-6 percent corridor.

Kazakhstan is also the leader in human rights in the region, and the government here does not shy away from expressions like “gender equality” and “political pluralism”, the change of power from the older president to the younger was one of the smoothest in Eurasia. There are now quotas for women and youth on electoral party lists. This could be reason enough to stop and relax, but the President has decided to push even further: he suggests extending these quotas for people with special needs – traditionally the most vulnerable part of society in every country. There is no doubt that this measure will become a reality, if President Tokayev vowed to introduce it.

The President does not hide or shy away from addressing problems. Kazakhstan’s openness to the world (its success) became one of the reasons for COVID-19’s penetration: citizens of Kazakhstan have been regularly visiting the countries with high rates of infection. At the discussion of the President Tokayev’s address, initiated by the prime minister Askar Mamin, participants recalled the state of emergency that had to be introduced in Kazakhstan in spring 2020 due to COVID-19. The country has tragically lost about 14,000 people to COVID-19 pandemic. But the country used this tragedy for the betterment of its future: new standards were introduced in the country’s health care system, which already has some of the most developed scientific bases in the world.

This is the right response to the crisis. Not a step backwards, but only forward, even if this entails new problems and challenges. Yes, the problem of brain drain is serious, but it does not mean that Kazakhstan will limit its academic exchanges or return to an autarchic education model. New global limitations on carbonium dioxide emissions are a challenge, but President Tokayev sees the solution to it in peaceful nuclear energy and green hydrogen, not in useless calls for a return to the good old ways of doing things.

“The main resource of Kazakhstan is its citizens,” the President said. And the citizens do need care and investment, which was the gist of the President’s speech.