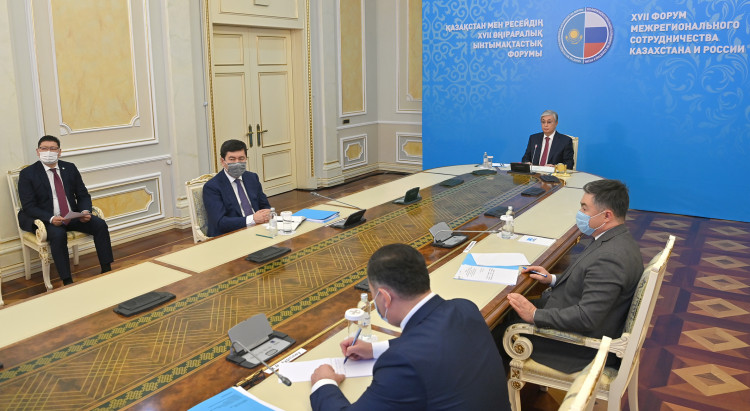 Tokayev said that the environment and green growth are becoming increasingly important.

“Kazakhstan and Russia have similar environmental problems: high air, water, and soil pollution, the accumulation of radiation, and industrial waste. Given our proximity, many problems are common to the two countries. To solve them, the governments signed seven agreements in ecology, preservation of biodiversity, joint use, and protection of transboundary water objects. These agreements are being systematically implemented. However, the environmental situation continues to deteriorate, and its solution requires active joint efforts at the international level,” said Tokayev.

He said that the countries could join efforts as they strive towards decarbonization of their economies, share experiences and best practices.

According to Tokayev, Kazakhstan and Russia should also cooperate to address the shallowing of the Ural River and the deterioration of the environmental situation that causes adverse implications for the local community.

Ural River, Europe’s third longest river that begins in Russia’s Ural Mountains, flows through western Kazakhstan and falls into the Caspian Sea, is shrinking, and it was one of the issues raised during the meeting. Photo credit: tengrinews.kz

“At our meeting in Omsk in 2019, we adopted a program of cooperation to preserve the ecosystem of the Ural River. I suggest we tell our governments to ensure its qualitative implementation with the preparation of a report on an annual basis. We should focus on the feasibility of the construction and operation of dams on small rivers, as well as the organization of new water intakes,” said Tokayev.

To preserve the Caspian seal population, Tokayev proposed the possibility of creating state reserves in the northern part of the Caspian Sea, as well as to provide free passage between the borders of the countries for the seasonal movement of saiga.

“Our country is among eight countries in the world with a high export potential for green hydrogen. It is obvious that implementation of alternative energy projects requires the formation of production and scientific infrastructure and the availability of highly qualified specialists. That is why we are setting up a competence center for high-tech innovations in the energy sector. Russia has a powerful scientific base and relevant human potential, so we are interested in inviting Russian specialists to participate in mutually beneficial cooperation,” said Tokayev.

The forum saw the signing of 13 documents on the protection and reproduction of the saiga population and the conservation of the Caspian seal, as well as on strengthening trade and economic relations between the regions and entrepreneurs.

“We are particularly pleased that today we have been able to successfully bring the topic of ecology and green development into the traditional industrial and economic agenda of our forum. This is, of course, not a trend, but an urgent need. In fact, this concerns the future of our states,” he added.

Overall, Tokayev reaffirmed Kazakhstan’s strategic partnership with Russia with over US$16 billion in investments from Russia over the past 15 years. Kazakhstan’s investments in the Russian economy also amounted to nearly US$4.5 billion.

“This year we are celebrating the 25th anniversary of the largest international oil transportation project – the Caspian Pipeline Consortium. Since its creation, more than 745 million tons of oil have been delivered to the world market. In view of the production growth and development of new oil production projects, including joint projects, it is important to increase the throughput capacity of the pipeline in advance and to ensure stable management of this complex international project,” said Tokayev.