“Kazakhstan, May God Bless You and Save You Forever!”

By Aigul Kuspan in Kazakhstan’s Independence: 30 Years, Op-Ed on 22 September 2021

With these words, Pope John Paul II completed his state visit to Kazakhstan in September 2001. 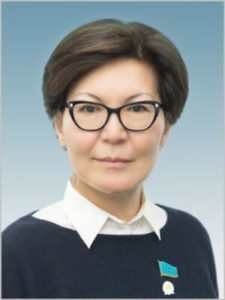 Exactly 20 years ago, on September 22-25, 2001, a unique event took place in the history of young independent Kazakhstan: Pope John Paul II paid an official visit to our country at the personal invitation of First President Nursultan Nazarbayev. It was one of the highlights of my diplomatic career, and the memories of it are still fresh.

At that time, I worked as the head of the Western Europe section of the bilateral cooperation department of the Ministry of Foreign Affairs of Kazakhstan. Realizing the historical significance of the visit, the whole department approached its organisation with special sensitivity and responsibility.

“Today the Catholic Church is actively restoring its traditional mission: churches are being erected, new parishes are opening. Its concerns are great in matters of peace-making, enlightenment and charity. Catholics, like representatives of other religions, strive to strengthen the unity and harmony of all the people of Kazakhstan” – with these words the First President of Kazakhstan, Nursultan Nazarbayev, met the distinguished guest at the capital’s airport.

In turn, barely getting off the plane, the Supreme Pontiff kissed the Kazakh land with excitement – the land of a multi-ethnic state with centuries-old and diverse spiritual and cultural traditions. 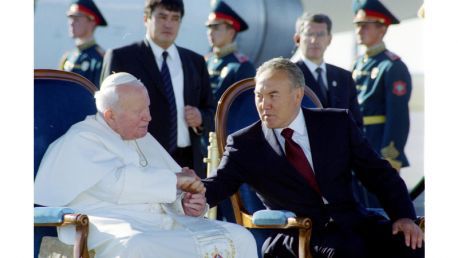 The visit of John Paul II to Kazakhstan is a historic event not only for the Catholics of Kazakhstan, but also for the entire state. Since ancient times, Kazakhstan, being a bridge between Europe and Asia, has been a place where various faiths met.

From the first day of its independence, Kazakhstan has developed a global interfaith dialogue as one of the key priorities of the state. First President of Kazakhstan, Nursultan Nazarbayev, and the President of the state, Kassym-Jomart Tokayev, who for many years headed the Secretariat of the Congress of Leaders of World and Traditional Religions as Speaker of the Senate, pay special attention to this important issue.

“It is thanks to peace, interethnic and interfaith harmony that we have managed to get rid of the hardest legacy of the regime, which suppressed not only economic and political, but also spiritual freedoms”, Nursultan Nazarbayev said during the visit of the Pope.

The program of the visit of the Holy Father (as Catholics call him around the world) to the capital of Kazakhstan began with the laying of a wreath at the monument to the victims of the totalitarian regime. John Paul II then held Holy Mass at the Motherland Square, where not only residents of our country gathered, but also pilgrims from different parts of the world. After that, His Holiness visited the Apostolic Nunciature (the Vatican Embassy). The Pontiff met with the students of the Lev Gumilyov Eurasian National University, answered their questions, and said kind words of parting words.

“I am glad to meet with you, the descendants of the noble people of Kazakhstan, proud of your indomitable thirst for freedom, boundless, like the steppe where you were born. You have different life paths behind you, not devoid of suffering. You sit here, next to each other, and you consider yourselves friends – not because you have forgotten all the evil that was in your history, but because you are justly interested more in the good that you can create together”, John Paul II said to the Kazakh youth.

He then celebrated Mass in the Cathedral and met with representatives of culture and science in the capital’s Congress Hall.

The Congress was convened for the first time on September 23-24, 2003, at the initiative of the First President of Kazakhstan. During the visit of Nursultan Nazarbayev to the Vatican, representatives of the Catholic Church were among the first to support the idea of ​​holding it. It is important to note that the first award of the Congress of Leaders of World and Traditional Religions was given precisely to the Pontifical Council of the Vatican: as such, Nursultan Nazarbayev noted the special role of the Holy See in organizing and holding the Congress.

Catholicism has its roots in the territory of Kazakhstan, as the Great Silk Road played an important role in the emergence of the Christian religion in the region.

On October 17, 1992, Kazakhstan established diplomatic relations with the Holy See. Six years later, a Relationship Agreement was signed between Kazakhstan and the Vatican. In the same year, the first Catholic higher educational institution, the theological seminary “Mary – Mother of the Church”, was founded in Karaganda.

Today there are Catholic parishes in many cities of the country. The largest Catholic cathedral, the Cathedral of the Blessed Virgin Mary of Fátima, is located in Karaganda. In 2003, the city authorities, responding to the request of the Karaganda diocese, allocated a plot for the construction of a new cathedral. In May 2003, the Secretary of State of the Holy See, Cardinal Angelo Sodano, blessed the grounds and the cornerstone for the construction of the cathedral.

History has decreed that the territory of Kazakhstan has always been and will be a place where representatives of various confessions, including Catholics, coexist in an atmosphere of peace and respect. In the conditions of independent Kazakhstan, the policy of the First President of the Republic of Kazakhstan has become a determining factor in the development of harmony, tolerance and spirituality. The visit of Pope John Paul II to our state became a recognition of this wise and far-sighted policy.

This visit played a significant role in further strengthening interfaith dialogue, as well as developing a fruitful partnership between Kazakhstan and the Vatican.

The author is Aigul Kuspan, Chairwoman of the Committee on International Affairs, Defense and Security of the Majilis of the Parliament of Kazakhstan.

This article was originally published in Kazakhstanskaya Pravda.