NUR-SULTAN – Kazakh athlete Yulia Putintseva reached the quarterfinals at the WTA (Women’s Tennis Association) 250 tournament held in Nur-Sultan after the second edition of the ATP 250 Astana Open, the press service of the Kazakh Tennis Federation (KTF) reported on Sept. 29.

Putintseva beat Vera Lapko from Belarus 6-4, 6-4 in their second-round match, winning six of the last seven games after Lapko had led the second set 3-0.

Putintseva will play against Russian athlete Anastasia Hasanova in the quarterfinals. 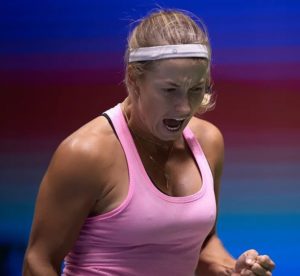 “I tried to focus on my game and push as many balls over to my opponent’s side as possible. I think it worked really well,” Putintseva said after the match.

Putintseva, the world No. 47, is the only remaining player from Kazakhstan in the draw after her teammate Zarina Diyas lost to Swedish athlete Rebecca Peterson 6-2 6-2 in the second round on Sept.29.

Nur-Sultan also hosted the Astana Open ATP 250, which was won by Korean Soon-woo Kwon, Sept. 19-26. The Kazakh capital was one of four new ATP 250 events added to the 2020 provisional schedule, as tennis continued its return to schedule following the suspension of the season due to the COVID-19 pandemic.