By George Baumgarten, United Nations Correspondent in International on 24 September 2021

NEW-YORK – In a video statement played at the 76th Session of the United Nations General Assembly, President Kassym-Jomart  Tokayev called attention to the three crises facing our world today: the Covid-19 pandemic, the ongoing World Climate Crisis, and the humanitarian situation in Afghanistan in the wake of America’s withdrawal. 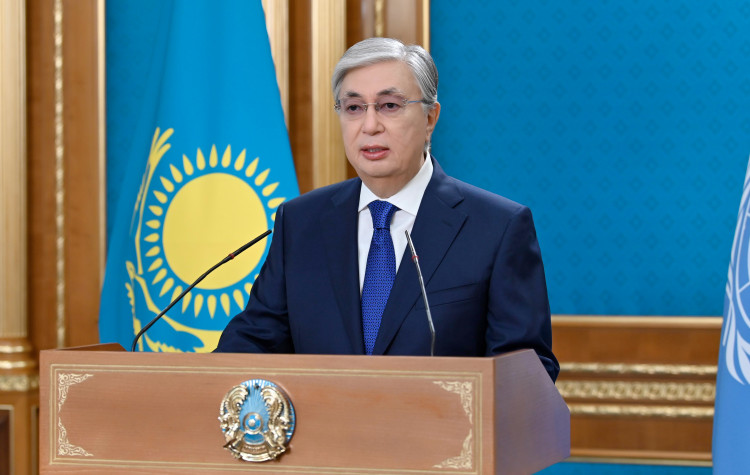 President Tokayev addresses the General Debate that this year focuses on climate change, Covid-19 and security issues, while the event is taking place in a hybrid format. Photo credit: Akorda press service

The president described the effect of the world pandemic, by distinguishing between “vaccinated” economies and “unvaccinated” ones. The “global recovery” from the pandemic can never be a complete one until there is the equity between these two different classes of states.

The pandemic, the president said, has exposed hitherto unseen vulnerabilities. Therefore, we must Build Back Better, for a sustained world.

The president asserted that there is a “vaccine gap” between vaccine-ready nations, and those not yet prepared. We must avoid creating an “Economic Iron Curtain”.

President Tokayev noted that temperatures have risen 2 degrees Celsius in the last 75 years, but this must be arrested. Kazakhstan hopes, he said, to achieve Carbon Neutrality by 2060.

In Afghanistan, the president called for the creation of a truly inclusive government and said that the humanitarian situation there must be the first priority. He noted that the U.N.’s Afghanistan offices have temporarily moved to Kazakhstan. This has created a U.N. Regional Hub in Almaty.

President Tokayev said that the process of disarmament must be revitalized, noting that it is 30 years since Kazakhstan’s first president, Nursultan Nazarbayev, closed the Nuclear Test Site at Semipalatinsk. And he advocated the total elimination of all nuclear weapons, by 2045, the 100th Anniversary of the United Nations.

The president noted that the pandemic had severely impacted not only the economic development of less-developed countries but their social and political development as well.

President Tokayev said that the old “Great Game” of powerful nations must give way to a “Great Gain”, in the heart of Asia. And Kazakhstan will be a leader, as a regional water and hydropower consortium.