By Zhuldyz Danabayeva in International, Kazakhstan’s Independence: 30 Years on 27 August 2021

NUR-SULTAN – The Kazakh Ministry of Foreign Affairs and the NGO Chief Editors Club have announced on Aug. 26 the names of the winners of the sixth international contest titled “Kazakhstan Through the Eyes of Foreign Media” in the capital. 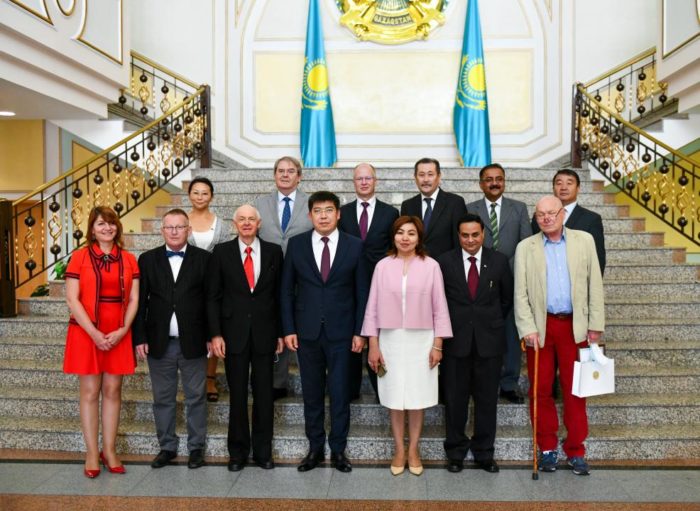 This year, “Kazakhstan Through the Eyes of Foreign Media” contest was dedicated to the 30th anniversary of the independence of Kazakhstan. Photo credit: Mfa.gov.kz.

This year, the contest was dedicated to the 30th anniversary of the independence of Kazakhstan. Overall, the works of 60 foreign journalists from approximately 40 countries were reviewed by the judges. The works covered topics related to Kazakhstan, including economy, politics, international relations, culture, tourism, healthcare, sports, nuclear disarmament, renewable energy, the legacies of the poet Abai Kunanbayev and the philosopher Abu Nasr Al-Farabi.

Deputy Minister of Foreign Affairs Yerlan Alimbayev noted that the number of participants increases annually, which proves that there is a growing interest from foreign media in Kazakhstan.

“The winners have an opportunity to learn more about Kazakhstan, its modern development and achievements within thirty years of the independence according to the program,” Alimbayev said at the award ceremony.

One of the winners, Mehmood Ul Hassan Khan, explained that he wrote about the ongoing political and economic reforms in Kazakhstan and the intellectual heritage of Abai Kunanbayev.

“On the anniversary of the great Kazakh thinker and poet, I published a series of articles about him in the Islamabad Post and DNA News. Abai Kunanbayev was a pioneer of expansion of national consciousness, self-knowledge and spiritual perfection which he used to win hearts and souls. He was a man of respect and reverence which he used as an effective way of educating the modern generation. He had a strategic vision about a planned modernization of public consciousness by emphasizing the importance of updating public consciousness. He adovated spiritual methods to overcome worldly problems,” Mehmood Ul Hassan Khan told The Astana Times.

The best piece from the Americas, the video “Kazakhstan Through the Eyes of Canadians” was issued in association with the United Communities of Canada.

“Kazakhstan has made tremendous progress and is not only a model for Central Asia, but for the entire whole world,” shared Tony Ruprecht.

The winners will also take part in tours to Almaty, Turkistan and the Burabay National Park.