SEOUL – President Kassym-Jomart Tokayev took part in the opening ceremony of the 2.2 meters high monument commemorating Kazakh poet and philosopher Abai Kunanbayev on Aug.17 as part of his official visit to South Korea. 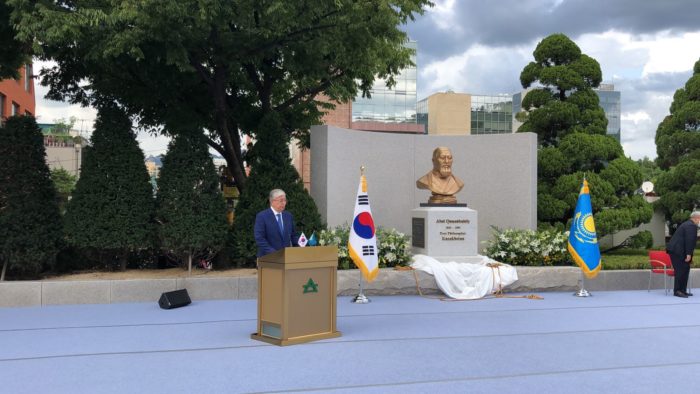 Kazakh President Kassym-Jomart Tokayev delivers remarks at the opening ceremony of the monument to Abai Kunanbayev in Seoul on Aug.17.

The original idea to erect the Abai’s monument was initiated by Kazakhstan Ambassador to Korea, Bakyt Dyussenbayev. The Board for Erecting the Statue was then organized by Sang Kyun Lee who represents Korea, and Aiman Mussakhajayeva, Rector of Kazakh National University of Arts, representing Kazakhstan.

Tokayev noted that this event aims to strengthen diplomatic relationships between Kazakhstan and South Korea.

“Abai’s spiritual legacy is not only special for our country, but rather is a great treasure for all nations. One of the Abai’s Qara sozderi (the Book of Works) says ‘In fact, human beings are superior to other human beings in intelligence, science, conscience, and behavior.’ I am aware that Korean people particularly appreciate these abilities, and thanks to them, the Republic of Korea has been able to join the rankings of the most developed countries,” said the President. 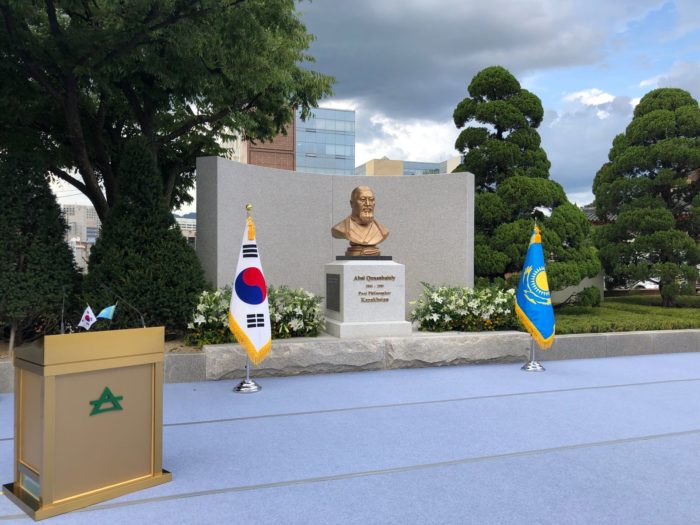 The poet’s memorial has been located at the campus of Seoul Cyber University, which is a part of Shin Il Educational Foundation group.

In 2020, Kazakhstan celebrated the 175th anniversary of Abai. Abai’s book “Altyn Shanyrakta Shyrkalgan An” (A song sang in the Golden Shanyrak) was published in Korean.

President Tokayev also added that many Korean students were interested in learning Kazakh language and studying in Kazakh universities. At the same time Kazakh students have been obtaining their educational degrees in Korean universities.

“Next year we are going to celebrate the 30th anniversary of diplomatic relations between Kazakhstan and South Korea. In this regard, we are planning to further develop our collaboration in education, science and culture”, the President concluded.

The poet’s memorial has been located at the campus of Seoul Cyber University, which is a part of Shin Il Educational Foundation group.

The land and all expenses were provided by Dr. Sang-Kyun Lee, the Board Chair of the Shin Il Educational Foundation. “I sincerely hope that today’s ceremony is the beginning of an expanded relationship and friendship between the people of Kazakhstan and Korea”, Lee said during his speech at the ceremony.