By Dana Khissimova in International on 19 August 2021

Tokayev appreciated the results of the talks held on the eve of the meeting of the heads of the governments of Kazakhstan and Russia. 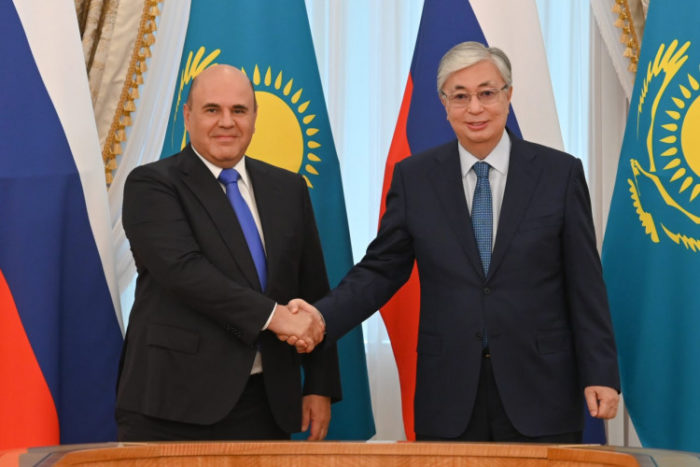 “Very important agreements are being prepared for signing, which will certainly give a serious impetus to the further development of cooperation. It is gratifying that, despite all the difficulties associated with the pandemic, the volume of trade increased by 26 percent only in the first five months of this year,” the President of Kazakhstan said.

In turn, the Prime Minister of Russia thanked Tokayev for the warm welcome and conveyed warm wishes from President Vladimir Putin.

“We successfully cooperate in the investment area. Russian business participates in 32 major projects in Kazakhstan. Our Kazakh colleagues are also actively involved in projects in the Russian Federation,” Mishustin said.

During the meeting Prime Minister Askar Mamin discussed with his Russian counterpart issues of cooperation in the format of the Eurasian Economic Union.

There are 7 791 enterprises with Russian participation and 3 325 joint Kazakh-Russian enterprises operating in Kazakhstan. Russian companies are among the five key investors in terms of the volume of funds invested in the economy of Kazakhstan, having invested about $12.6 billion over the past 10 years.

During the visit, documents were signed, according to which it is planned to create a joint Office of strategic initiatives. The task of the office will be to create and scale joint development projects.

Chairman of the Agency for Strategic Planning and Reforms of Kazakhstan Kairat Kelimbetov noted that the successful implementation of joint initiatives on the development of education, technology, investment climate, tourism and ecology of the two countries will have a significant impact on the development of the entire region as a whole.

The sides discussed topical issues of global and regional security, including the situation in Afghanistan.