By Saltanat Boteu in Society on 5 August 2021 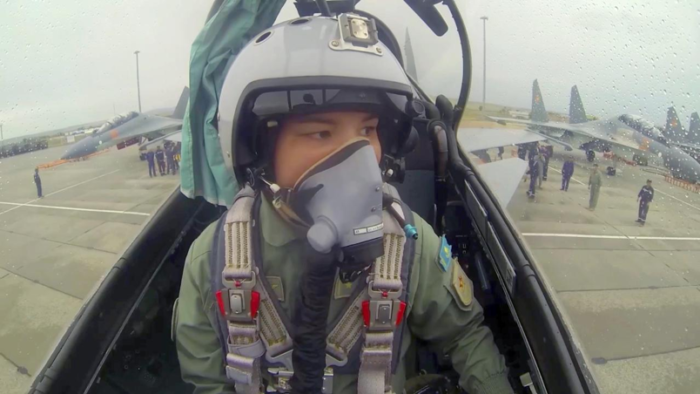 The Commander-in-Chief of the Air Defense Forces of the Armed Forces of Kazakhstan, Aviation Lieutenant General Nurlan Ormanbetov took the exam to receive admission to the independent flight.

“For the first time in the history of the Armed Forces of Kazakhstan, a woman independently flew as a crew commander on a Su-30SM combat aircraft. It is necessary to note that good training, her aspiration to reach top, a desire to carry out the task of protecting the air space of Kazakhstan as a fighter pilot. She proved that women in combat aviation, on an equal basis with men, can perform complex tasks,” said Ormanbetov.

The only female combat aviation pilot in Kazakhstan serves at the Karaganda airbase. To prepare for this flight and the exam, Botai spent several months training at the aviation base in Taldykorgan city.

“Self-piloting the Su-30SM is a big step in my professional development. Now I have set a goal for myself to improve my technique and develop my skills, so that in the future, according to the training program, I will be allowed into combat on ground and air targets and group flights,” said Botai.

“After graduating from the academy, I had 240 hours of flight time. Forty of them I flew in the State Aviation Center of Nursultan. I mastered the TL-2000, Tecnam P-2002 ultralight aircraft, and the twin-engine Diamond DA42,” said Ardana Botai.

The Su-30SM is a fourth generation multifunctional fighter. The aircraft is capable of operating in any weather conditions, day and night, and is designed for aerial reconnaissance, as well as the destruction of air, ground and sea targets.

To obtain permission to fly on the fighter, pilots receive theoretical instruction, train on a Su-30SM simulator, and fly out as navigators. Having successfully passed numerous tests and exams, they receive admissions to participate in independent flights.

Before reaching her goal as a crew commander, Botai had to go through a long process. She had an interest in mechanics and dreamed of becoming a military pilot since her childhood.

“I always played with my brother with cars, and collected magazines in which I was interested in mechanics. Once I came across a photo of the MiG-29 and realized that I wanted to master this aircraft. And not just become a pilot, but a military pilot,” said the pilot.

After school, Botai applied for training at the Military Institute of the Air Defense Forces named after Talgat Begeldinov in Aktobe. She got rejected, but it did not stop Botai from pursuing her dream.

“Then I decided to enter the Civil Aviation Academy in Almaty. After graduation with a degree in flight operation of aircraft and engines, I began to look for an opportunity to enter military service. After graduating from the academy, I had 240 hours of flight time. Forty of them I flew in the State Aviation Center of Nursultan. I mastered the TL-2000, Tecnam P-2002 ultralight aircraft, and the twin-engine Diamond DA42,” she said.

Botai claims that along with the support of her relatives and colleagues, she was motivated by the examples of legendary military pilots.

“In the process of studying the intricacies of aviation, I learned about many outstanding pilots of the Great Patriotic War,” said the pilot. “This is the legendary Khiuaz Dospanova, who served in the women’s regiment of night bombers. And, of course, my fellow countryman Nurken Abdirov. Their actions inspire and make me study even better to defend my homeland, if necessary.”