By Akmaral Arystanbekova in Kazakhstan’s Independence: 30 Years, Op-Ed on 24 August 2021

The problem of nuclear tests at the Semipalatinsk test site was raised at the United Nations for the first time at the 45th session of the General Assembly in 1990. 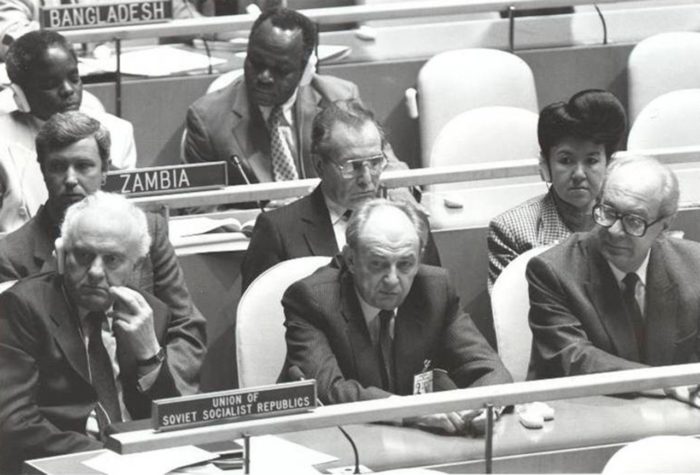 As part of the Soviet delegation headed by the Minister of Foreign Affairs of the USSR, Eduard Shevardnadze, I participated in the 45th session of the UN General Assembly in 1990, also as head of the Soviet delegation to the Third Committee of the UN General Assembly, which considers social and humanitarian issues on the agenda. In my numerous conversations with delegates of member states, the leadership of the UN Secretariat and with journalists, I always mentioned the problems associated with the consequences of nuclear tests at the Semipalatinsk test site. Aware of this, Vladimir Petrovsky, Deputy Minister of Foreign Affairs of the USSR and head of the Soviet delegation to the First Committee, which deals with issues of disarmament and security, invited me to speak at this Committee. I readily agreed, and together with Sergey Batsanov, Permanent Representative of the USSR at the Conference on Disarmament, we prepared the text of the speech on the issue of a complete and universal ban on nuclear tests.

On October 23, in the morning, I was the first to speak on behalf of the USSR delegation. The Permanent Representative of the USSR to the UN, Yuli Vorontsov, specially came to listen to me. There were many delegates in the hall who noted that a representative of a union republic that is not a UN member (like the Ukrainian and Byelorussian Soviet Socialist Republics) was speaking for the first time at a meeting of the First Committee, which aroused great interest.

I would like to quote part of this speech (as translated from Russian by UN) based on the official verbatim record of the 13th meeting of the First UN Committee on October 23, 1990.

The problem of the prohibition of nuclear-weapon testing long ago became a problem of the survival of mankind. Its solution requires the joint efforts of the entire international community, of parliamentarians, the public and, unquestionably, the United Nations. For me, as a member of the Government of the Kazakh SSR, on whose territory lies the Semipalatinsk nuclear-testing range, the issue has particular relevance, and is fully appreciated. Kazakhstan, unfortunately, has had direct experience of what is involved. During the 40 years of testing at the Semipalatinsk range, nuclear devices, a thousand times more powerful than the bomb dropped on Hiroshima have been exploded. Furthermore, prior to 1963 many of those tests were carried out in the open. All this has done incalculable damage to the health of the people, to the environment and to the economy of the nearby territories. I express full solidarity with representatives of States who have spoken in the First Committee on the inhumane nature of nuclear testing and the real danger it poses to the health of the people and the environment.

In recent years, together with the development in our country of the process of democratization and glasnost, there has emerged in Kazakhstan and throughout the country a strong popular movement in favour of the immediate halting of nuclear tests and the closing of nuclear ranges. Kazakhstan was the birthplace of the powerful movement known as Nevada-Semipalatinsk, whose activities have been widely recognized not only in our country but also abroad.

It is symbolic that the powerful voice of the world public in support of demands for the immediate halting of nuclear testing was sounded in Alma-Ata, the capital of Kazakhstan, at an international congress under the slogan “World electorate against nuclear weapons” held there last May. That congress was attended not only by eminent representatives of the peoples of many countries but also by military personnel, diplomats, doctors and nuclear physicists. Such forums not only give a marked impetus to efforts to ensure the cessation of nuclear testing but also make it possible to understand better the arguments of both the opponents and advocates of nuclear testing, so that a consensus can be reached among all mankind. It was no accident that one result of the congress was a joint appeal by the participants to the leaders of the nuclear States to halt nuclear-weapon testing immediately.

Today, when the world community is entering the post-confrontational era, when the cold war is fading into the past and the balance of terror is being replaced by a balance of cooperation and interaction, the task of ending nuclear testing assumes a global dimension encompassing all humanity. That is why on October 9 the Supreme Soviet of the USSR, in connection with the ratification of the Soviet-American Treaties on the Limitation of Underground Nuclear-Weapons Tests and on of Underground Nuclear Explosions for Peaceful Purposes, adopted an address to parliaments and to the world stressing that the USSR is ready to turn its moratorium on nuclear testing into a definite and final cessation of such tests if the Government of the United States, either unilaterally or on a basis of reciprocity, will end its own nuclear-testing programmes. Confirming its proposal regarding global nuclear disarmament, the USSR expressed its readiness to become a non-nuclear-weapon State if the other nuclear States will do the same. The address contains an appeal to for the immediate ending of nuclear testing and for the holding of a parliamentary referendum to that end. We hope that the parliaments and the public of all countries of the world will respond in the immediate future to this appeal by the Supreme Soviet of the USSR and that this initiative of the Soviet legislators will be reflected in one of the resolutions on the ending of nuclear testing to be adopted at the forty-fifth session of the General Assembly.

Kazakhstan has already made its own choice in favour of the immediate cessation of nuclear testing and the closing of testing ranges. Specific steps in that direction are being taken by the President of the Kazakh SSR, Mr. Nazarbayev, the Supreme Soviet and the Government of the Republic.

At its very first session, the new Supreme Soviet of the Kazakh SSR adopted a decree supporting the people’s demands for the immediate ending of nuclear-weapon testing in its territory. The declaration on the State sovereignty of the Kazakh SSR under discussion at the second session of the Supreme Soviet of the Kazakh SSR includes an article banning the production, stockpiling and testing of nuclear weapons on the Republic’s territory. The people of Kazakhstan are resolutely opposed to the transfer of the nuclear-weapon-testing programme to the territory of any other Republic of the USSR.

… I still remember the silence in the room during my speech. When I finished, Yuli Vorontsov praised the text, calling it “balanced”.

Later, when I worked as the Permanent Representative of Kazakhstan to the UN and as the head of our delegation to the First Committee, many delegates recalled my first speech and their reaction to it. Pakistan’s Ambassador to the UN Jamshid Marker told me that he was “shocked” by what he heard and by the courage of our republic’s decision to immediately end nuclear tests, which did not correspond to the official approach of the USSR on this issue.

Sergey Batsanov then told me that the Ministry of Defense of the USSR was “quite calm” about my speech.

However, the events of the next day gave it a dramatic character. On October 24, on the UN Day, a nuclear bomb was tested in the Soviet Union at the Novaya Zemlya test site. As Batsanov later explained to me, it was no longer possible to keep it in the adit. But it was impossible to imagine a more unfortunate date chosen for the explosion.

When I entered the UN building on October 24, I was bombarded with questions and angry reproaches. “You, Madam Minister, yesterday called on the nuclear powers to immediately stop nuclear tests, and today the USSR itself detonated a nuclear bomb. How do you explain this? ” – Ambassador of Mongolia Luvsangiin Erdenechuluun was indignant. Many of my yesterday’s listeners also asked for an explanation.

What could I tell them? You see, I said, you are now also being convinced of the rightness of the position of Kazakhstan, whose people have suffered so much from nuclear tests. Ultimately, this event caused great sympathy for our republic and sympathy for our problems.

The historical decision of Kazakhstan to close the Semipalatinsk test site by the Decree of the First President Nursultan Nazarbayev of August 29, 1991, the subsequent accession of the new independent state to the Treaty on the Non-Proliferation of Nuclear Weapons as a non-nuclear state and the voluntary abandonment of the inherited fourth most powerful nuclear arsenal in the world have produced respect and trust in our country from the global community.

The firm and consistent position and leadership of Kazakhstan in achieving a world free of nuclear weapons invariably receive support from the UN Member States and the UN Secretary General, which I constantly witnessed during almost eight years of work as the first Permanent Representative of Kazakhstan to the UN and the head of nation’s delegation in the First Committee of the UN General Assembly.

On September 10, 1996, the UN General Assembly adopted the Comprehensive Nuclear Test Ban Treaty, in the development of which within the First Committee of the UN our newly independent state had actively participated from 1993. On September 30, 1996, Minister of Foreign Affairs Kassym-Jomart Tokayev signed the Treaty in New York, and Kazakhstan became one of the first parties to this historic international disarmament agreement.

Paying tribute to Kazakhstan’s contribution to nuclear disarmament and non-proliferation of nuclear weapons, the United Nations in 2009 declared August 29 – the day of the closure of the Semipalatinsk test site – the International Day against Nuclear Tests, which has since been commemorated around the world.

In his Address on August 28, 2020, on the occasion of the Day of the Closing of the Semipalatinsk nuclear test site, President Kassym-Jomart Tokayev stressed that after the closure of the test site, one of the priority tasks for Kazakhstan was the social rehabilitation of people and of the territories affected by prolonged nuclear tests. He noted that ensuring security on the territory of the former test site has become a key priority of state policy.

In his statement at the 75th session of the UN General Assembly on September 23, 2020, President Tokayev drew the attention of the world community to the crisis of nuclear non-proliferation and disarmament. He underlined that Kazakhstan had been “the role model as a responsible state by willingly abandoning its nuclear arsenal and shutting down the world’s biggest nuclear test site”. However, “continuous erosion of the non-proliferation regime leaves us on a dangerous position.” In this regard, he also emphasized that “Kazakhstan expects all Member States to join its appeal to nuclear powers to take necessary and urgent measures to save the humankind from a nuclear disaster.”

For 30 years of its independence, the Republic of Kazakhstan has made a significant contribution to strengthening peace and international security, non-proliferation of weapons of mass destruction, invariably confirming its recognized authority as a responsible actor in international engagement and a reliable partner in global cooperation to build a safe world for the benefit of all people on the planet.