By Assel Satubaldina in International, Kazakhstan’s Independence: 30 Years on 28 August 2021

NUR-SULTAN – Dismantling the nuclear arsenal that Kazakhstan inherited after the collapse of the Soviet Union has been proven to be a visionary, wise and noble decision, said Executive Secretary of the Comprehensive Nuclear Test Ban Treaty Organization (CTBTO) Robert Floyd at an Aug. 27 press briefing in Nur-Sultan devoted to the 30th anniversary of the closure of the Semipalatinsk test site and organized by the Kazakh Ministry of Foreign Affairs. 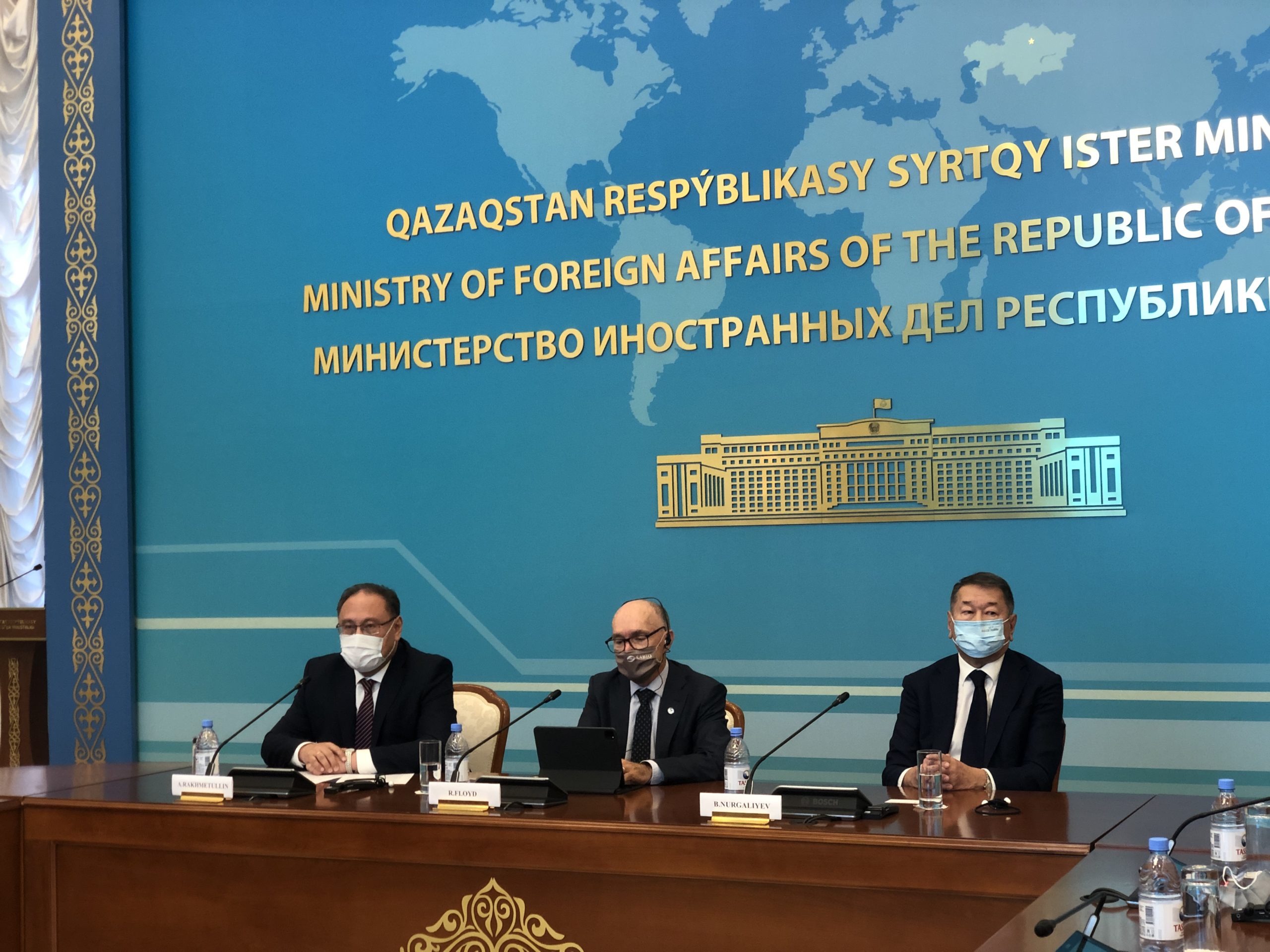 From L to R: Rakhmetullin, Floyd and Nurgaliyev

Aug. 29 marks 30 years since Kazakhstan made a landmark decision to close the Semipalatinsk test site, where the Soviet Union conducted nearly 450 nuclear tests between 1949 to 1989. Nearly 1.5 million people bore the devastating consequences from the nuclear testing. Families that lived close to the test site are known to have higher rates of cancer, different pathological conditions, and higher rates of suicide, among other effects.

At Kazakhstan’s initiative, Aug. 29 has been designated by the United Nations in 2009 as the International Day Against Nuclear Testing, a measure aimed at raising public awareness about the effects of nuclear testing and the need to eliminate them in a broader effort to achieve a nuclear-weapon-free world.

This year also marks 15 years since the establishment of Central Asia’s nuclear-weapon-free zone.

Floyd, for whom the visit to the Kazakh capital is his first since his appointment to the post, said that Sept. 24 will mark another important date in global nuclear disarmament and non-proliferation – 25 years since the Comprehensive Nuclear Test Ban Treaty was opened for signature. So far, the treaty has 185 signatures and 170 ratifications, but still has no signatures from the world’s major nuclear powers.

As part of his visit to Kazakhstan, Floyd visited the Semipalatinsk test site with foreign journalists and met with Kazakh Foreign Minister Mukhtar Tileuberdi. The two adopted a joint statement, where they emphasized the significance of Kazakhstan’s decision and urged the states that have not yet signed or ratified the treaty to do so.

Floyd also met with President Kassym-Jomart Tokayev on Friday, Aug. 27. Tokayev reaffirmed the country’s commitment to close cooperation with the CTBTO and said that Kazakhstan will remain a close and reliable partner of the organization.

Speaking at the briefing, Deputy Foreign Minister Akan Rakhmetullin said nuclear disarmament and non-proliferation are among the main priorities of the foreign policy of Kazakhstan.

He added that though work has begun to rehabilitate the lands, they are still not suitable for agricultural purposes or any other economic activities.

But the region is not the only one affected by the nuclear testing, said Chair of Kazakhstan’s Foreign Policy Institute Bolat Nurgaliyev, who is a veteran diplomat who took part in many negotiations that took place in the 1990s on this issue.

“There were areas that hosted the testing and other areas that were affected by nuclear radiation, including other regions – Pavlodar, Karaganda, Semipalatinsk,” said Nurgaliyev.

According to Nurgaliyev, Kazakhstan also calls on the world to “get rid of all nuclear weapons per se, once and for all.”