Bozkir, who was elected President of the 75th session of the UN General Assembly on June 17, 2020, met with Kazakh President Kassym-Jomart Tokayev, Deputy Prime Minister and Minister of Foreign Affairs Mukhtar Tileuberdi as well as the country’s other senior officials.

During his meeting with President Tokayev, the sides discussed Kazakhstan’s cooperation with the United Nations focusing on joint efforts to fight the pandemic and ensure regional security and stability.

Tokayev said the visit of Volkan Bozkir to Kazakhstan and the region reflects the increasingly important role of Central Asia.

“Your visit is extremely important in terms of assessing the development of the situation in Central Asia, a region which is becoming increasingly important in the context of global politics,” said Tokayev.

He said Kazakhstan is fully committed to the goals of the United Nations, which he described as the “reflection of multilateralism.”

“Under your wise presidency, the General Assembly is making a great contribution to the achievement of the organization’s goals, particularly in the face of the negative consequences stemming from the pandemic, which has affected all areas of daily life,” said Tokayev.

The international community must be more united to address the consequences of the pandemic, according to Tokayev, who reaffirmed his country’s readiness to contribute to overcoming the crisis.

Bozkir, in his turn, commended Kazakhstan’s activities in the UN Security Council, as well as the work being done to resolve the Syrian conflict. Bozkir’s visit coincided with the two-day round of talks on Syria on July 7-8, known as the Astana Process.

“You (referring to Tokayev) have worked in the UN system for many years and you have a lot of experience. The leadership of the country is also actively involved in the organization. I welcome Kazakhstan’s contribution to the peaceful settlement of the conflict in Syria, known as the Astana process,” said Bozkir.

The efforts to curb the pandemic, climate change, and Sustainable Development Goals, global and regional security, and stability were the focus of Bozkir’s meeting with Mukhtar Tileuberdi, where he spoke positively of the anti-crisis measures and reforms being undertaken in the country. 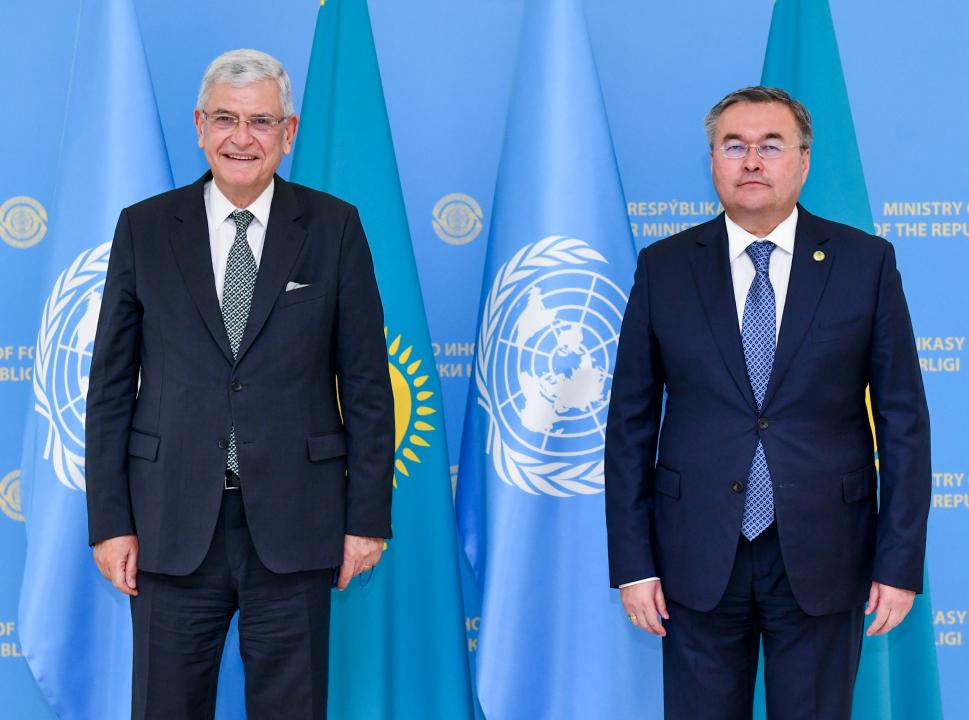 Kazakhstan was the last destination on Bozkir’s regional tour, which started July 4 in Turkmenistan, followed by his visits to Uzbekistan and Kyrgyzstan.