NUR-SULTAN – President Kassym-Jomart Tokayev took part in the July 2 meeting with the members of the National Olympic team ahead of the upcoming 2020 summer Olympic Games in Japan.

“In the year of the 30th anniversary of Independence, the places on the Olympic podium will become not only your personal achievement, but also the triumph of the entire nation,” said Tokayev. Photo credit: Akorda.

Some athletes participated in the meeting virtually from the Akbulak training camp in the Almaty region.

Tokayev noted that it is a great honor and responsibility to represent the country at the Olympic games. The Olympic flame is set to become a symbol of the fight against the pandemic for all nations this year.

“Each of you had to show a real champion character in order to strengthen your leadership positions at the international level and get the Olympic licenses. In these difficult conditions, you followed the strict sports regime of self-restraint, setting a positive example of responsible behavior,” said Tokayev. 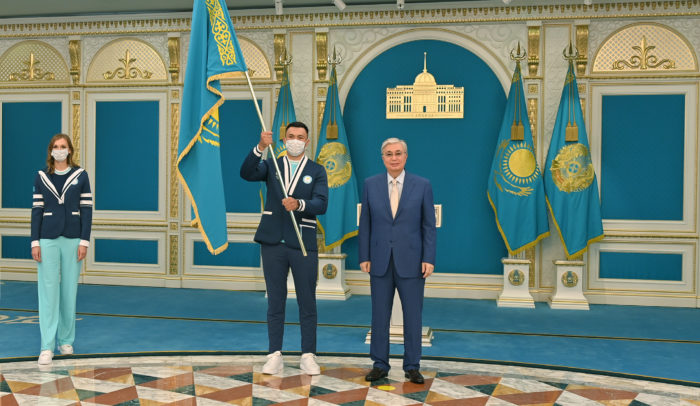 The President believes that athletes will inspire thousands of young people “to lead a healthy lifestyle and pursue their goals.”

During the event, Tokayev handed over the national flag to two flag bearers – Olga Rypakova, Olympic triple jump champion and Kamshybek Kunkabayev, the silver medalist of the World Boxing Championship. The athletes will carry the flag at the opening ceremony of the Games July 23 at the Olympic Stadium in Tokyo.

Rypakova expressed gratitude to the President and promised to make every effort to represent the country honorably.

“We have been waiting for this Olympics for five years,” said Timur Kulibayev, President of the National Olympic Committee of Kazakhstan. “We are proud of our athletes, who went through a difficult time, they did not give up and followed their Olympic dream.”

This year, 95 athletes, who won 96 Olympic licenses in 27 sports, joined the national team of Kazakhstan. The Kazakh athletes will also compete in new Olympic sports – sports climbing and karate.

The delegation will leave for Tokyo on July 16.

Kazakhstan has won 71 Olympic medals, including 16 gold ones over the years of Independence. More than 100 major sports facilities were built in the country.