NUR-SULTAN – The Kazakh Ministry of Foreign Affairs presented its advisory and consultative body titled “Dialogue Platform on Human Dimension” at the STEP UP (Solidarity for Transparency, Enabling Environment and Partnership) Forum of Non-governmental organizations (NGOs) of Central Asia in Almaty on July 7-10, reported the press service of the ministry. 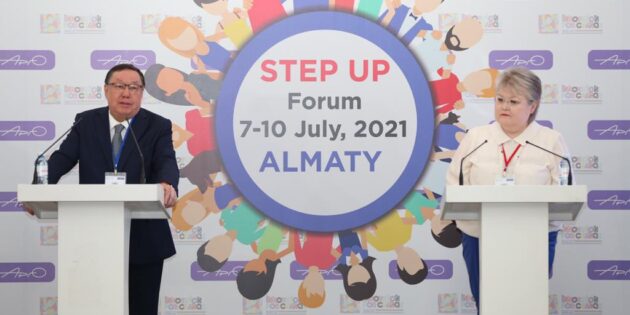 Ambassador-at-Large of the Kazakh Ministry of Foreign Affairs and Chairman of Advisory and Consultative Body Ussen Suleimen and Executive Director of the Civil Society Development Association (ARGO) Jamila Asanova at STEP UP Forum on July 7. Photo credit: Argonet.org.

Ambassador-at-Large of the Kazakh Ministry of Foreign Affairs and Chairman of Advisory and Consultative Body Ussen Suleimen spoke about the activities of the platform and the key results of its work.

“The main task of the platform is to contribute to the elimination of gaps in the country’s legislation through constructive discussion with the participation of representatives of the government, parliament and NGOs,” said Suleimen.

The dialogue platform includes working groups on four main areas, such as the development of democracy, ensuring the rule of law, ensuring fundamental freedoms and human rights and legislative activity. Regular meetings of working groups and subgroups are held at least once every two months. Currently, the platform incorporates 49 NGOs.

The STEP UP Forum, held on July 7-10, is aimed at analyzing trends and challenges and jointly establishing a common vision for a strategy for the development of civil society in Central Asia. It was attended by representatives of more than 500 NGOs and more than 50 leading world experts in the development of civil society from Germany, Great Britain, the Republic of Korea, Russia and Central Asian countries.

Throughout the course of three days, the representatives of Central Asian states spoke about trends and achievements of the past few years that indicate the rapid transformation of the region. The advancement of the new political climate is characterized by a significant strengthening of unity and cohesion with the potential to make Central Asia into a stable and steadily developing region and a reliable international partner.

A meeting between representatives of the Belt and Road Initiative (BRI) China Expert Community of Practice and environmental experts and international press was also held within the framework of the Forum. The meeting was aimed at raising awareness and engaging with the media over the social-environmental aspects of the BRI projects.

Chairman of the Yuksalish Uzbek National Movement Bobur Bekmurodov spoke at the Forum about increased contacts between the heads of Central Asian states, the implementation of large joint programs and the opening of new areas of cooperation for both political and public institutions in the region.

“Achieving sustainable development and implementing fundamental transformations in the countries of the region requires broad public participation. Uzbekistan, as a country undergoing a stage of radical reform of all spheres of the state and society, is committed to the idea of expanding citizen participation in decision-making processes, democratizing political institutions and developing civil society,” said Bekmurodov.