NUR-SULTAN – When millions of people were forced into lockdown last year, healthcare workers were on the frontline to combat the pandemic. Stuck in hospitals for days and weeks they were saving lives when little was known about the virus. June 20 marked Healthcare Worker Day in Kazakhstan, another reminder of the tremendous contribution healthcare workers made amid the pandemic and beyond. The opening of the Altyn Zhurek (translated as the golden heart in Kazakh) memorial in the center of Kazakh capital city Nur-Sultan, located in the Linear Park between Akmeshit and Turkistan street, was among the ways that the nation honored the efforts of the healthcare workers and a “symbol of the warm attitude to all those who demonstrated heroism during the difficult time,” according to President Kassym-Jomart Tokayev, who attended the opening ceremony of the monument.

Nearly 10,000 health care workers got sick with coronavirus and more than 200 died from it.

Tokayev noted that the opening of the Altyn Zhurek memorial symbolizes the solidarity of Kazakh citizens as the nation continues to fight the infection. 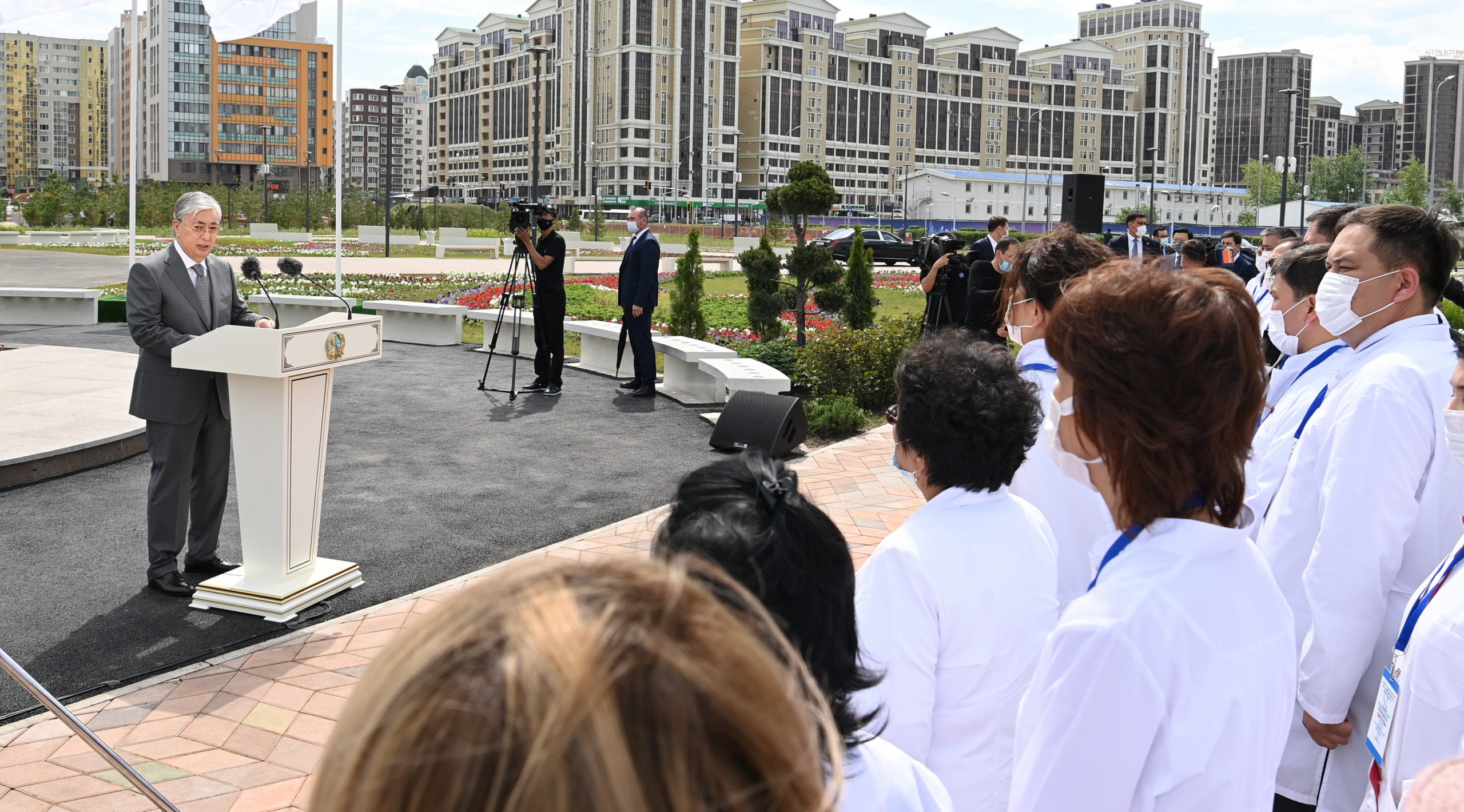 Tokayev said that the state will continue supporting the healthcare workers, noting a planned economic package of stimulating measures.

“Around 180 billion tenge (US$419 million) were allocated for surcharges and insurance allowances for medical workers involved in the fight against coronavirus alone. The government will allocate an additional 71.5 billion tenge (US$166.4 million) for these purposes to continue payments until October this year. We started a phased raise of doctors’ salaries. This process will be continued,” he said.

He also emphasized the importance of creating an effective system of social support for medical workers.

“It should include a mandatory provision of housing for specialists arriving to rural areas, settlement allowances, and other benefits. Such measures should be taken in all regions of the country with the active involvement of mayors and governors,” he said.

“The moral and legal responsibility of medical workers is growing, so are the demands from citizens. Many specialists cannot handle the pressure, they face burnout professionally and quit the healthcare sector. Unfortunately, this is a sad fact. This trend is observed not only in our country,” said Tokayev.

To address this issue, he instructed the government to create a system of professional liability insurance for medical workers by the end of the year.

Tokayev said that working in the healthcare system should become prestigious and attractive for the younger generation.

International organizations, including the United Nations and the World Health Organization, also congratulated the Kazakh medical workers on the occasion.

“The past year has been like a storm for our doctors. A storm that no medical school prepares for,” wrote the WHO Office in Kazakhstan in their social media post.

The WHO Office in Kazakhstan, the European Union in Kazakhstan, and the German Embassy in collaboration with the National Research Cardiac Surgery Center released a video to mark Healthcare Worker Day. The video tells a story of how medical workers in Kazakhstan faced the first days and months of the pandemic and the psychological toll it took on them.