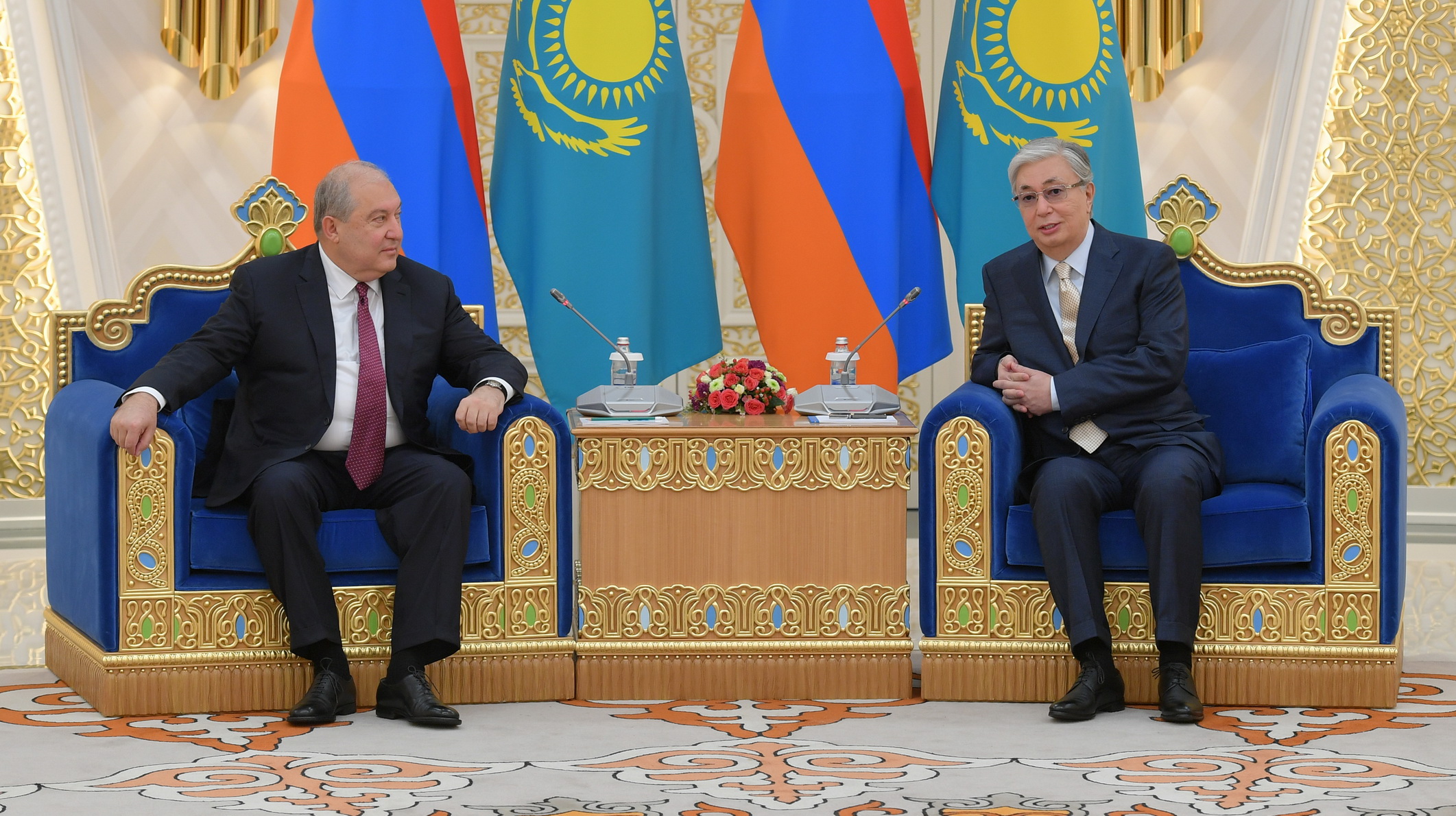 Sarkissian and Tokayev at their meeting in Akorda. Photo credit: Akorda press service.

During the meeting, the heads of state discussed the development of Kazakh-Armenian cooperation, particularly ways to strengthen political dialogue, trade, economic, cultural and humanitarian ties, as well as the global and regional agenda.

The economic side of bilateral ties was also discussed within the framework of the Eurasian Economic Union, the Collective Security Treaty Organization (CSTO), the United Nations, the Organization for Security and Co-operation in Europe (OSCE), and the Commonwealth of Independent States (CIS).

“Armenia is a close ally of ours. The relationship between our countries is based on traditions that go back centuries. Naturally, we hope that cooperation does not stand still and is filled with new content. Therefore, the governments of our countries and specific specialized departments are working to achieve this goal,” said Tokayev.

President Tokayev noted that the ties between Nur-Sultan and Yerevan have great potential for expansion, primarily in trade, education, innovative technologies and food processing.

During the meeting between Nazarbayev and Sarkissian, the conversation focused more on the diplomatic and cultural ties between the countries.

Nazarbayev commented on the long history of effective diplomatic relations between Armenia and Kazakhstan and expressed confidence that the agreement reached between the leaders of Armenia, Azerbaijan and Russia on Nov. 9, 2020 would facilitate the resolution of all controversy between Yerevan and Baku.

“Our relationship is very kind and close. These are not just words. After all, the Armenian diaspora has been living here in Kazakhstan for many years. It is thriving. Our friendship is very important both for the Republic of Armenia and for the entire Armenian nation,” said Sarkissian.

The discussion to explore new ideas for economic cooperation between Kazakhstan and Armenia began earlier on May 25 at an online Kazakh-Armenian business forum that gathered more than 30 companies from the two countries.

At the forum, Kazakh representatives introduced businesses in the fields of gold production, construction of railways and highways, modernization of heating systems, renewal of urban transport infrastructure and food industry.

Similar to the meeting between Tokayev and Sarkissian, the parties at the forum agreed on the need to deepen mutually beneficial trade, economic and investment cooperation between the two countries. A second forum will be held in Almaty in the second half of October this year.