NUR-SULTAN – Kazakhstan became the first country in Central Asia and the third in the Commonwealth of Independent States (CIS) to install the breakthrough Gamma Knife tumor treatment, reported the press service of the Prime Minister on June 19. 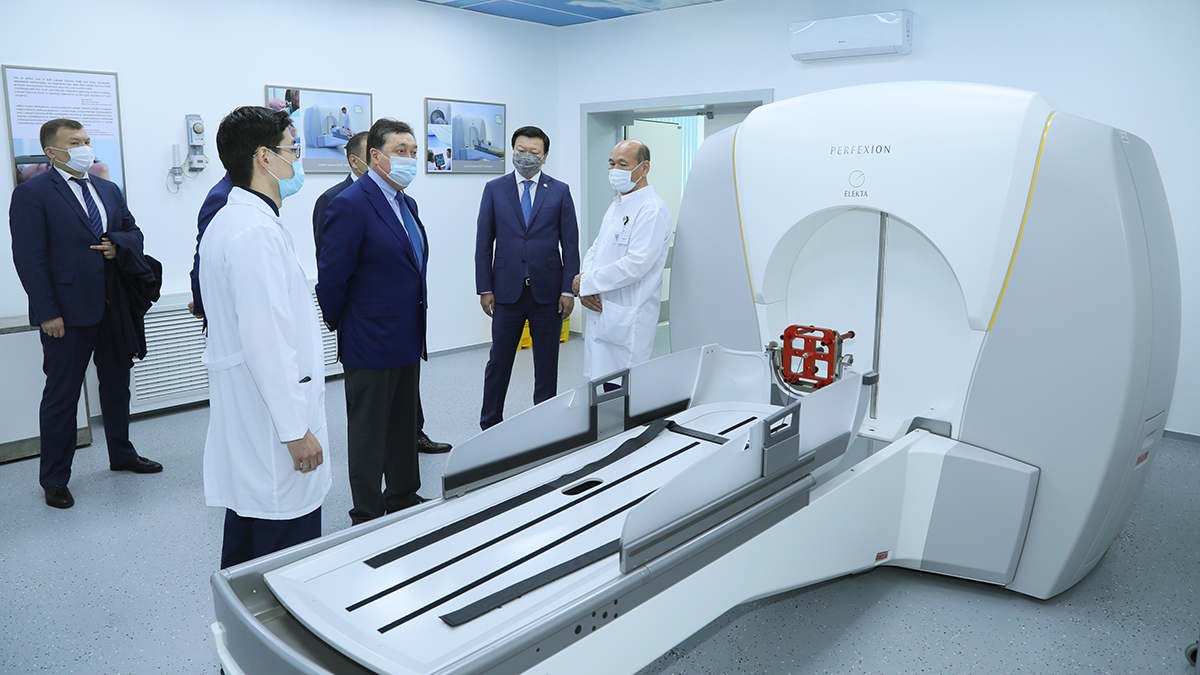 There are only about 400 Gamma Knives available across the globe with the majority available in the U.S. and Japan. The newly acquired Gamma Knife was first unveiled during Kazakh Prime Minister Askar Mamin’s visit to the National Center for Neurosurgery.

Whereas previously patients had to undertake expenses and travel abroad, from now on Kazakh citizens will be able to receive Gamma Knife treatment free of charge under a state-subsidized quota.

“Increasing the availability and efficiency of the healthcare system is one of the key priorities in the development of our country. Within the framework of the Healthy Nation national project that is currently in development, a set of measures will be taken to further modernize the healthcare infrastructure and improve social support measures for medical workers,” said the Prime Minister.

Produced in Sweden, the Gamma Knife can be used for cancerous and noncancerous tumors in the brain, head and neck, as well as neurological conditions, such as arteriovenous malformations and essential tremors. Kazakh medical workers received appropriate training in medical establishments in Milan, Prague and Moscow to be able to safely operate Gamma Knife.

“It is a big breakthrough in the development of neurosurgery in Kazakhstan. All regions of the country have enough diagnostic equipment with the help of which we are able to detect illness at the early stages. Gamma Knife will help to treat these patients without surgery, complications and via outpatient care,” said CEO of the National Center for Neurosurgery Serik Akshulakov.

Medical experts also predict that the new treatment option will contribute to the rise of medical tourism in the country due to the low availability of Gamma Knives in the region.

The Gamma Knife is a type of stereotactic radiosurgery that involves radiation therapy that delivers beams of high-dose radiation from multiple angles to precisely target and destroy tumors and heal vascular and functional brain diseases. The advantages of the innovative technology lie in not exposing the whole body and all parts of the brain to radiation and avoiding general anesthesia and postoperative inpatient care. The method also involves an effective singular procedure instead of having to carry out several stages of treatment.

The presentation of the innovative medical technology coincided with the eve of Kazakh Medical Workers Day celebrated on June 20.

On that day President Kassym-Jomart Tokayev opened the Altyn Zhurek ( golden heart) memorial in Nur-Sultan dedicated to the healthcare workers.

Kazakh Healthcare Minister Alexey Tsoy congratulated the medical workers of the country by emphasizing the two trends happening in the country, including the increase in birth rates and average life expectancy. The positive dynamic is made possible by the labor of 260,000 medical workers of the country who conduct more than 2,000 surgeries daily and treat more than 420,000 people. “In recent years, we have seen an improvement in two of the most important indicators, such as an increase in life expectancy and an increase in fertility rates. And behind each of these achievements, of course, is the titanic work of health workers,” said Tsoy.