By Adelya Dauletkyzy in Society on 18 June 2021 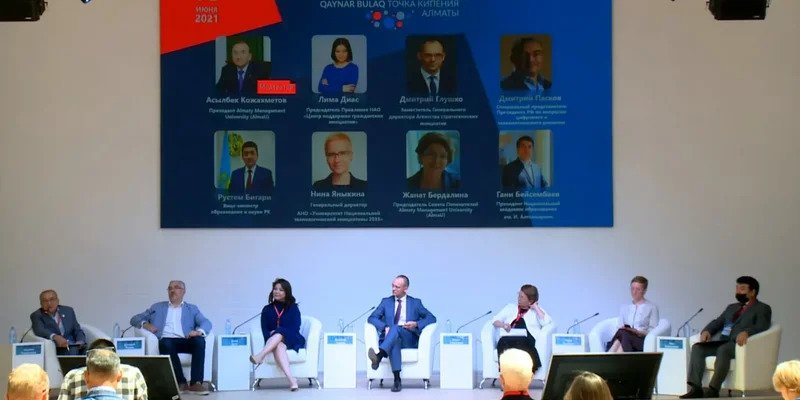 The starting discussion of the event focused on the new reality of the society, state, and business in the post-COVID-19 world. Photo credit: holanews.kz

Tochka Kipeniya is a space for collective work, where everyone can organize or participate in educational and business events for free. Launched in 2013 in Moscow, the project comprises 115 such spaces across 75 Russian cities, and now in Almaty giving a chance to the city residents to access a broader network of Kazakh, Russian and international experts, government officials and diplomats, entrepreneurs, representatives of the civil society and academia.

AlmaU said the platform is open to discuss projects and topics ranging from tourism, urban development to big data, except for issues related to politics and religion.

“QAYNAR BULAQ – Tochka Kipeniya Almaty is an opportunity to attract citizens, business people, public figures, experts to universities to create a new point around which you can get many different effects on the development of the country. We hope that it will spread to other universities,” said AlmaU President Asylbek Kozhakhmetov.

The opening ceremony was attended by Almaty Akim (Mayor) Bakytzhan Sagintayev and representatives of the Kazakh Ministry of Information and Social Development, the Atameken National Chamber of Entrepreneurs, the Kazakh Academy of Education, and the Agency for Strategic Initiatives, an organization focused on improving the business climate and professional development in Russia.

“Tochka is based in Almaty at the private entrepreneurial management university. This is a good place to promote new approaches that have developed in our network,” said Special Representative of the Russian President for Digital and Technological Development Dmitry Peskov, who also attended the opening ceremony.

Nina Yanykina, general director of the autonomous non-profit organization “University of the National Technological Initiative 2035”, says that “Tochki Kipeniya”, including the ones in university format, are becoming a popular platform for testing the best digital practices in the field of education; “The cornerstone of the development of the education system is the introduction of individual educational trajectories when everyone gets the opportunity for development – you learn exactly what you need, and at a comfortable pace for you,” added Yanykina.

In 2020, around 13,000 events were held at Tochka Kipeniya sites attended, in person and remotely, by more than 600,000 people. As of June 2021, more than 1.7 million people are registered on the Leader-ID platform, which holds registration for events and interaction with professional communities.