By Zhanna Shayakhmetova in Business, Kazakhstan’s Independence: 30 Years on 7 June 2021 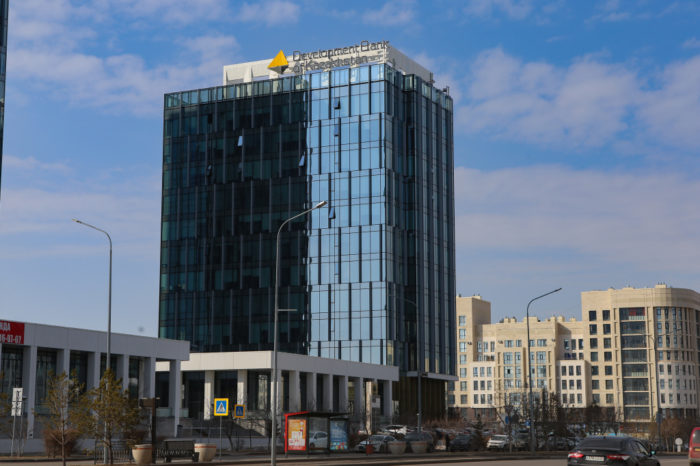 The building of the Development Bank of Kazakhstan in the Kazakh capital.

The bank has been involved in launching the strategic projects, which are supposed to be key drivers of the national economy. These are projects in mechanical engineering, petrochemical and the mining industries, food production, construction, logistics, energy and renewables, communications, tourism and export operations.

“When selecting an operator for the implementation of state programs, the choice often falls on DBK, since not all financial organizations and banks can provide large amounts of money at a low interest rate for such a long period of time. That is why the Development Bank of Kazakhstan has been chosen as the largest player in the sector to accumulate the necessary funds to build new large enterprises and expand the capacity of existing ones,” said Chairman of the Management Board of the DBK Abay Sarkulov.

According to the DBK’s PR service, the bank has contributed to the development of the country’s industrial non-resource sector. Since the beginning of its operation, the total volume of projects and investment programs financed by the bank exceeded 3.7 trillion tenge (US$8.6 billion) which is about 149 investment projects and 107 export operations. Some 122 investment projects worth more than 7 trillion tenge (US$16 billion) have been launched in the regions, which created more than 30,000 jobs in the process.

The list of the bank’s financed projects includes the production of long rails from the Aktobe Rail and Section Works company, the railway wheels of the Prommashkomplekt company, power transformers of the Asia Trafo company, poultry meat of the Kus-Vkus of Makinsk poultry farm, high quality ferrosilicon of the YDD Corporation, coal concentrate of the Qaz Carbon, cars of the Hyundai Trans Kazakhstan and Saryarkaavtoprom companies.

To contribute to the social sector, DBK also served as the financial operator of state programs, such as the State Program of Accelerated Industrial and Innovative Development and the Nurly Zhol Infrastructure Development Program.

To mark these important milestones Sarkulov noted that the bank has more ambitious goals that will bring benefits to business, the country’s economy and people.

“So, just like the country, we are stepping into a new stage of development, and just like sovereign Kazakhstan, we see huge prospects for development. DBK’s plans and objectives are inextricably connected to the goals set by the country’s leadership. They include building a new structure of a diversified, self-sufficient economy with an accent on the manufacturing industry,” said Sarkulov.

The development institutions are specialized financial organizations, whose activities are aimed at eliminating the factors that restrain the economic and social development of a country, operate worldwide and, in particular, in the Eurasian space, according to the DBK’s PR service. However,  DBK differs from these organizations with the most flexible lending conditions, a wide range of services and the provision of better financial services. In Kazakhstan,  there are no analogues to  DBK.