By Aizada Arystanbek in Culture, Kazakhstan’s Independence: 30 Years on 2 June 2021

NUR-SULTAN – The Jochi Khan historical and cultural center will open its doors in the Karaganda region in the near future, the press service of the regional administration reported on May 28. 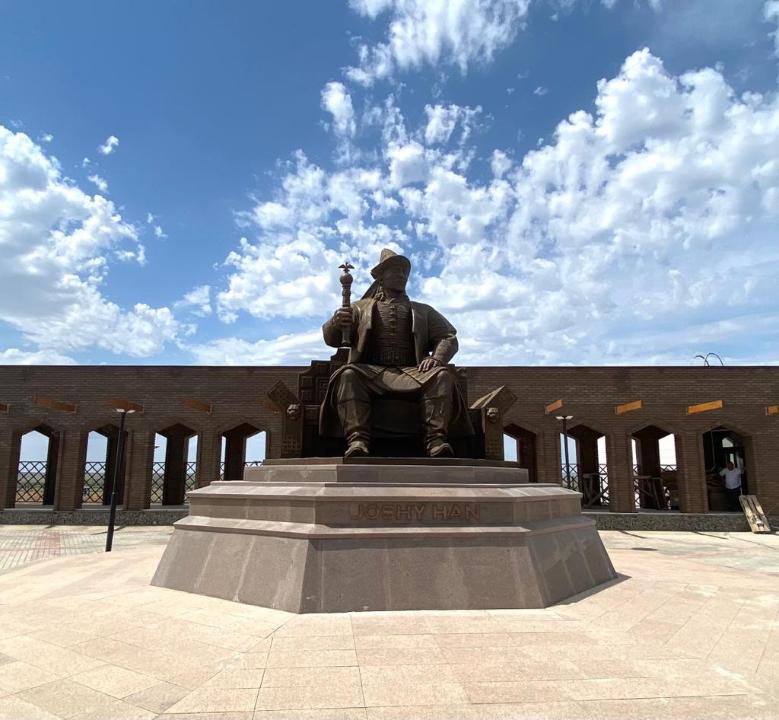 The center will serve as a tourist destination into the ancient Kazakh past and aims to become a scientific center for studying the era of the Golden Horde.

The Golden Horde is a medieval multinational state in Central Eurasia. It is also known as the Ulus of Jochi, Ulug Ulus or the Kipchak Khanate. The Horde was first formed in the 13th century and is a historic predecessor of the Kazakh Khanate.

The complex is named after Jochi Khan, the oldest son of Genghis Khan and a notable Mongol military leader of the early 13th century. His headquarters were located on the left bank of the Karatal river in the Karaganda region. A five-meter statue of Jochi Khan was erected in the courtyard of the complex.

The center has an area of 2,500 square meters with an exhibition hall and a hotel. It will also include an ethnic aul (village) area with yurts (a traditional portable nomadic house) and tents for exhibitions and shops carrying national products and jewelry.

The designers are planning to build a 3D project of the ancient city. It will become an area for science conferences and symposia, as well as for field history lessons for students.

The opening of the Jochi Khan center signifies the results of a holistic approach of the Kazakh government to explore the meaning of the past for both the cultural heritage of the nation and the economic and tourist development of the country.

On May 31, the “Ulug Ulus of the Golden Horde: Origins, History and Heritage” International Practical Conference was held in Nur-Sultan. The conference looked at history from a critical perspective and highlighted the need to meticulously study history in isolation from the current state of affairs and carry out a thorough deconstruction of historically important events.

“The Golden Horde is the cradle of the history of our statehood. We appear as heirs of the Horde before the world and, thus, lay the foundation for the restoration of historical justice. At the same time, it is necessary to remember the important credo voiced by the President that history should be a matter of historians, not politicians,” said First Deputy Chief of Staff of the Kazakh President Dauren Abayev at the conference.

The opening of another scientific center was also announced at the conference. Under the instruction of Tokayev, the Scientific Institute for the Study of Ulus Jochi will open under the Kazakh Ministry of Education and Science.

First Deputy Chief of Staff explained that the growing incentive to study the Golden Horde is not just due to its historical value but to the lessons the past can offer to the present of Kazakhstan. According to Abayev, a look back on the system present in the Golden Horde that represented an egalitarian cultural dialogue, meritocracy, efficiency, centralized governance and value of human life can be beneficial for the continued development of the contemporary Kazakh state model.

Political scientist and expert at the International Turkic Academy Timur Kozyrev commended the strategically important trend of examining the ancient past. “A systematic scientific study of the heritage of the Golden Horde, as well as of the historical continuity between the Golden Horde and the Kazakh Khanate, should become the foundation for our society, which will regain its historical memory of its culture and statehood,” said Kozyrev.