NUR-SULTAN – The National Cup of Student Entrepreneurship, Startups and Innovations and the second Championship of School Entrepreneurship Enactus Kazakhstan National Expo 2021 was held June 17-18 in the Kazakh capital. 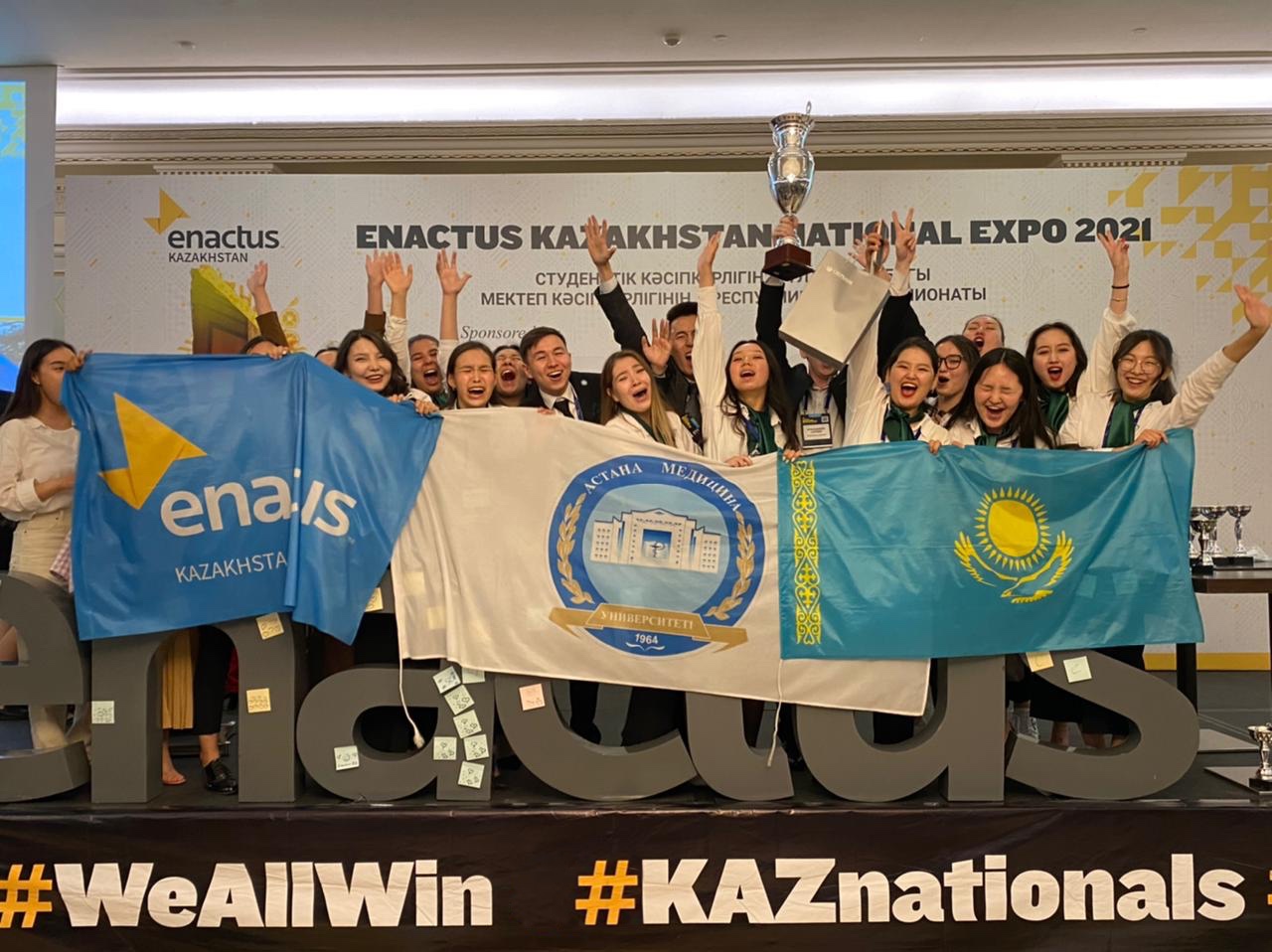 The Enactus Kazakhstan Student Entrepreneurship Cup was given to the team from the Astana Medical University of Nur-Sultan, which presented projects in the medical, social and environmental fields with the introduction of innovations in the field of healthcare.

One of the winning projects is the AuxMed project, which is a platform of courses where the latest recommendations on child care are collected together and presented in an accessible language. The platform will help young mothers who have given birth for the first time or have children with chronic diseases who often face problems with caring for their child and have never taken such courses. 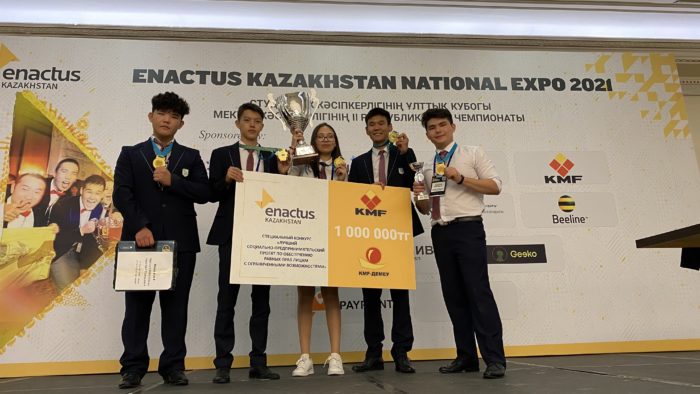 The Enactus Kazakhstan National Expo is an annual exhibition of the results of the work of the participants of the international Enactus program. Within the framework of the Expo, job fairs, business meetings with employers, pitchings and special competitions are held. The main event in this series of events is the National Cup of Student Entrepreneurship, the winner of which gets the right to defend Kazakhstan at the world championship against 36 competitor countries. This year, a new initiative of the Enactus program was the holding of the Republican School Entrepreneurship Championship for the second year in a row. At the Enactus Kazakhstan National Expo competition platform, students and schoolchildren presented socio-entrepreneurial, environmental and innovative projects. More than 70 representatives from domestic businesses acted as members of the jury.

Applications were accepted at the beginning of the academic year from 42 student and 35 school teams, which were selected online on May 15-18. According to the results of the online qualifying round, 20 youth teams met in the capital.

“The year 2020 has shown us that when you are alone with your problems, you need to learn how to deal with them on your own. Not everyone goes to medical school and chooses medicine as a profession, but everyone faces medicinal choices every day. Our goal is to make medicine accessible,” says Nuriddin Smagulov, the captain of the Enactus team of Astana Medical University. 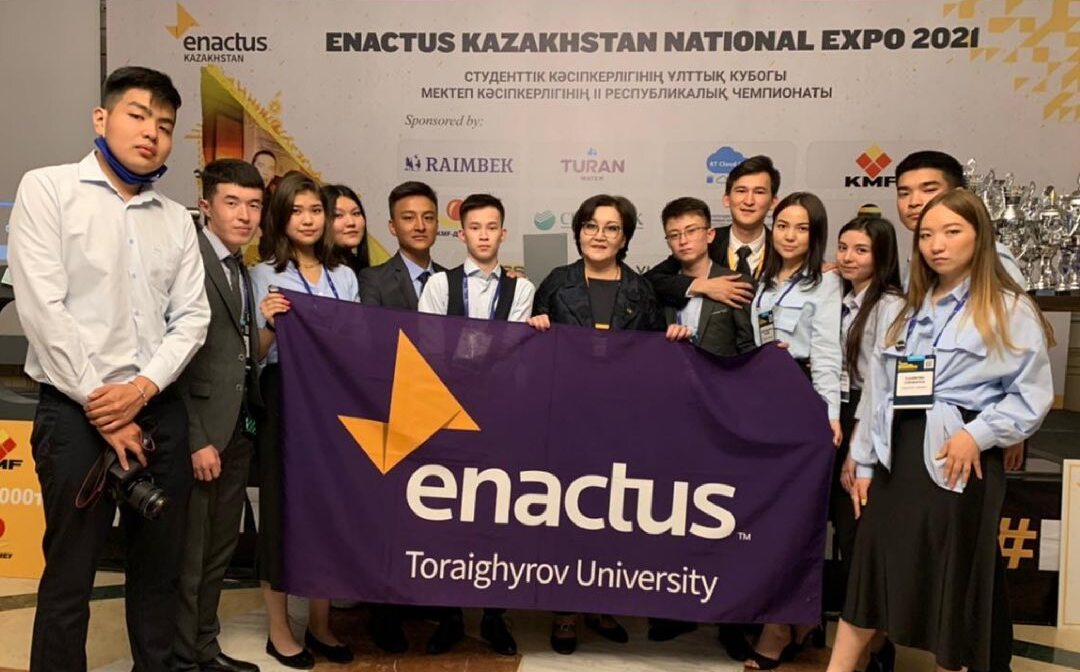 The second-place winner was the team of Toraighyrov University from Pavlodar with a project for the production of innovative bactericidal ventilators.

The third place was won by the team from the Caspian University of Almaty, which presented a project aimed at social adaptation and rehabilitation among young people diagnosed with autism spectrum disorder and the project “Save our Lives”, aimed at creating a system for preventing domestic violence and providing timely assistance.

The fourth place was taken by the team of Taraz Regional University named after M. H. Dulati with project Phoenix – rehabilitation for people who have suffered a stroke and various injuries that lead to a complete or partial loss of limb strength.

The team from Astana Medical University – the National Champions of the Student Entrepreneurship Cup – will defend Kazakhstan at the Enactus World Cup 2021.

Meanwhile, the winner of the Championship of School Entrepreneurship Enactus Kazakhstan was the team from the Nazarbayev Intellectual School of Physics and Mathematics in Taraz, which presented the IT project “UnApp Space” – an innovative application for finding and enrolling high school graduates in higher education institutions and the project “Crepiks,” which is a platform for teaching students programming with the help of an interactive method.

The second place was taken by the team of the Regional Multidisciplinary Boarding School for Gifted Children, Pavlodar, which presented the project “Avicenna” – a cross-platform application that simplifies the search for medical institutions and the selection of appropriate services in the field of healthcare and the project “NewStoryPage”, which promotes high-quality and creative learning about the History of Kazakhstan.

The third-place winner was the School Lyceum No. 8 for Gifted Children in Pavlodar, while the fourth place was taken by the team of the Nazarbayev Intellectual School of Physics and Mathematics in Nur-Sultan.

“There are no losers in Enactus. By creating projects, participants are already actively involved in solving socio-economic problems, by helping the low-income and unemployed to improve their standard of living through social entrepreneurship. All the participants who were able to build their business teams, achieved results and presented them at the competitions can already be considered winners, as they made a possible contribution to improving the lives of the population through their talent, creativity and energy,” said President of Enactus Kazakhstan Albina Yerzhanova.

Finally, graduates of the Enactus international program shared their experience in entrepreneurship and talked about how Enactus helped them in becoming business leaders in the “Enactus Kazakhstan Alumni Hub: Success Story”.