NUR-SULTAN – Half a million of citizens were involved in various volunteering activities in 2020, said Kazakh Minister of Information and Social Development Aida Balayeva at the government meeting on Tuesday that focused on the implementation of the government roadmap for the development of volunteering in 2021-2023. 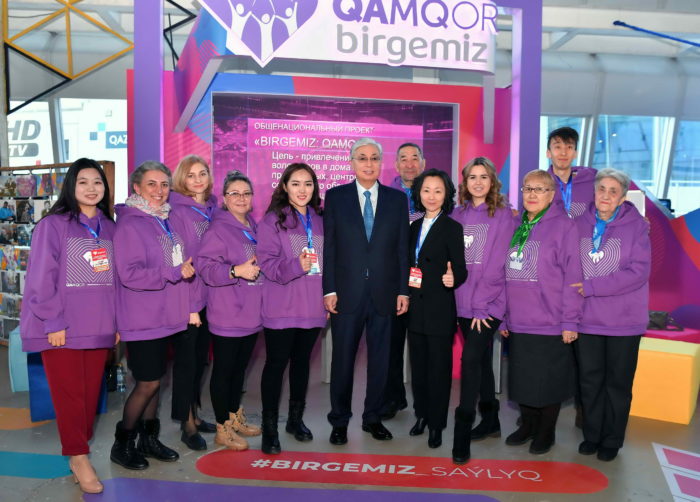 Volunteering is becoming an important form of civic engagement in Kazakhstan. Hardly anyone could have predicted that the past year, which was designated as the Year of Volunteer back in 2019, would be so challenging, coinciding as it did with the coronavirus outbreak.

Volunteers helped more than 950,000 citizens, including in the distribution of aid, working with people with disabilities, children and adolescents.

According to the estimates of Kazakhstan’s Talap think tank, the economic contribution of volunteers in the economy of Kazakhstan in 2020 amounted to 3.9 billion tenge (US$9.2 million). The largest share of volunteer activities has been in health and social services.

The draft law on volunteer activities, developed by the Ministry of Information and Social Development with other profile government agencies, will be submitted to the government by July 1.

“Together with the experts, a standard for supporting volunteer activities is being developed. On its basis, the main directions will be given to the government bodies in the development of volunteering,” said Balayeva.

The legislative changes will include granting benefits for admission to educational institutions and employment, expanding the rights and responsibilities of volunteers, establishing a minimum age threshold for volunteers and standards for corporate volunteering.

“We saw the great potential of the volunteer movement and a real benefit. Therefore, on the initiative of the head of state Kassym-Jomart Tokayev, this year will continue the support of volunteer initiatives. It is necessary to develop the principles of mutual assistance and charity in the society,” said Kazakh Prime Minister Mamin.

In September last year, during the 75th session of the UN General Assembly, Tokayev proposed to declare an International Year of Volunteer Mobilization for Development emphasising the crucial role volunteers have played in the fight against pandemic.

Seven Kazakh citizens currently work in different UN agencies as part of the fully funded international volunteering assignment based on the agreement signed between the United Nations Volunteers and the government of Kazakhstan.

“This year, we will continue giving the international Volunteer of the Year award involving people from different countries of the world to motivate volunteers,” said Balayeva.

She also noted that a lot depends on the officials themselves.

“There is no doubt that volunteering is a free voluntary activity. But it also requires the appropriate conditions. The rapid development of the volunteer movement is associated with decent support of today’s civic initiatives,” she added.