20 years of Shanghai Cooperation Organization: a View from Kazakhstan

Over the past two decades, the Shanghai Cooperation Organization (SCO), which was founded on June 15, 2001 as one of the largest multilateral structures in the world, has come a long way in becoming an important factor in the regional and global system of international relations. 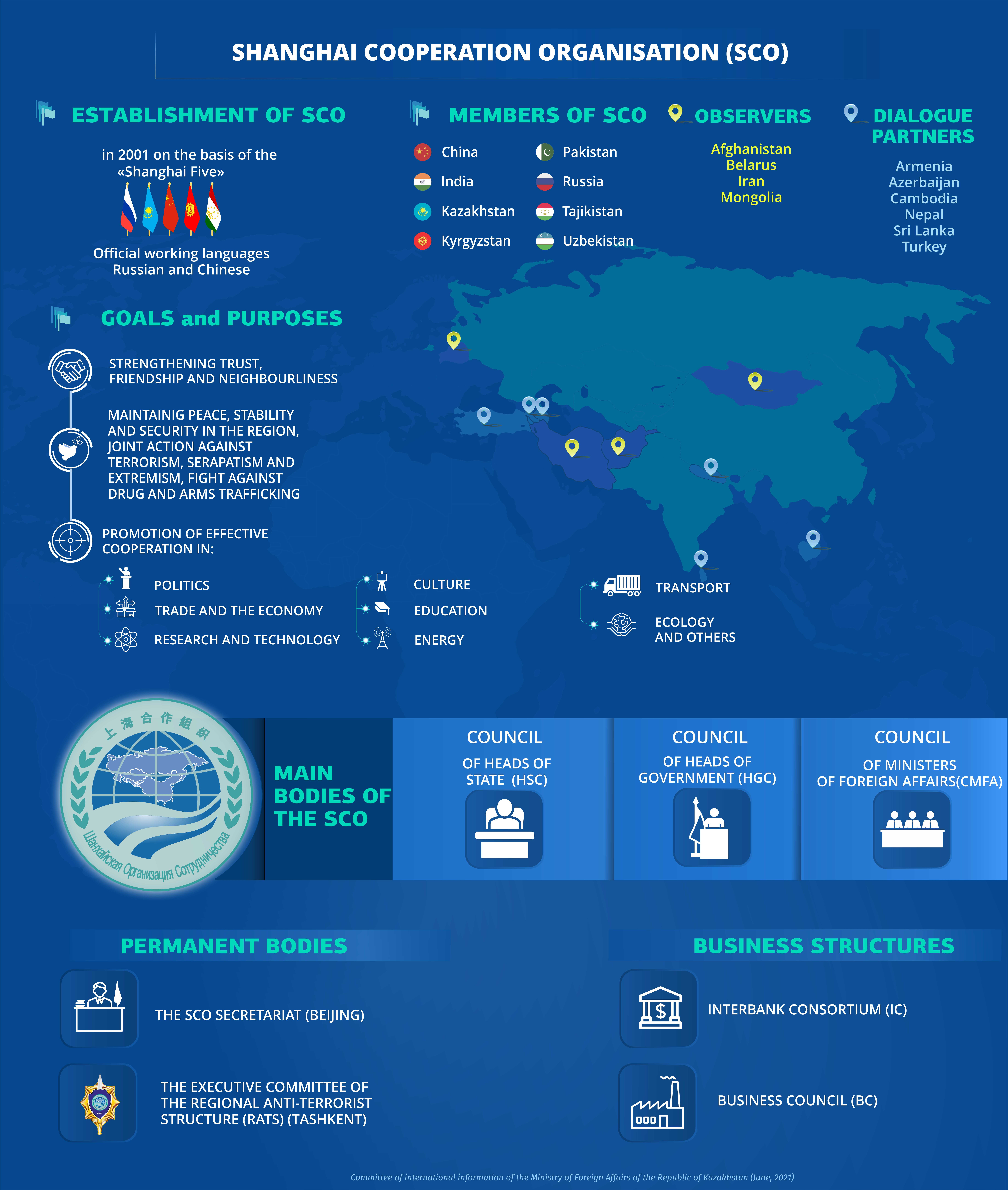 Kazakhstan highly appreciates the role of the SCO in strengthening international security and regional cooperation. Together with other members of the Organization, our country strives to constantly make its worthy contribution to strengthening and fully implementing its powerful potential.

A solid SCO foundation was laid by the mechanisms of the Shanghai Five, consisting of Kazakhstan, Kyrgyzstan, Tajikistan, Russia and China. In 1996, at the first summit involving these states, the leaders of our countries signed the Agreement on Strengthening Confidence-Building Measures in the Border Area, and a year later – On the Mutual Reduction of Armed Forces in the Border Area.

First President of Kazakhstan Nursultan Nazarbayev directly participated in the initiation and the establishment of the Organization, the formation of its inherent Shanghai Spirit of mutual understanding and equal cooperation. 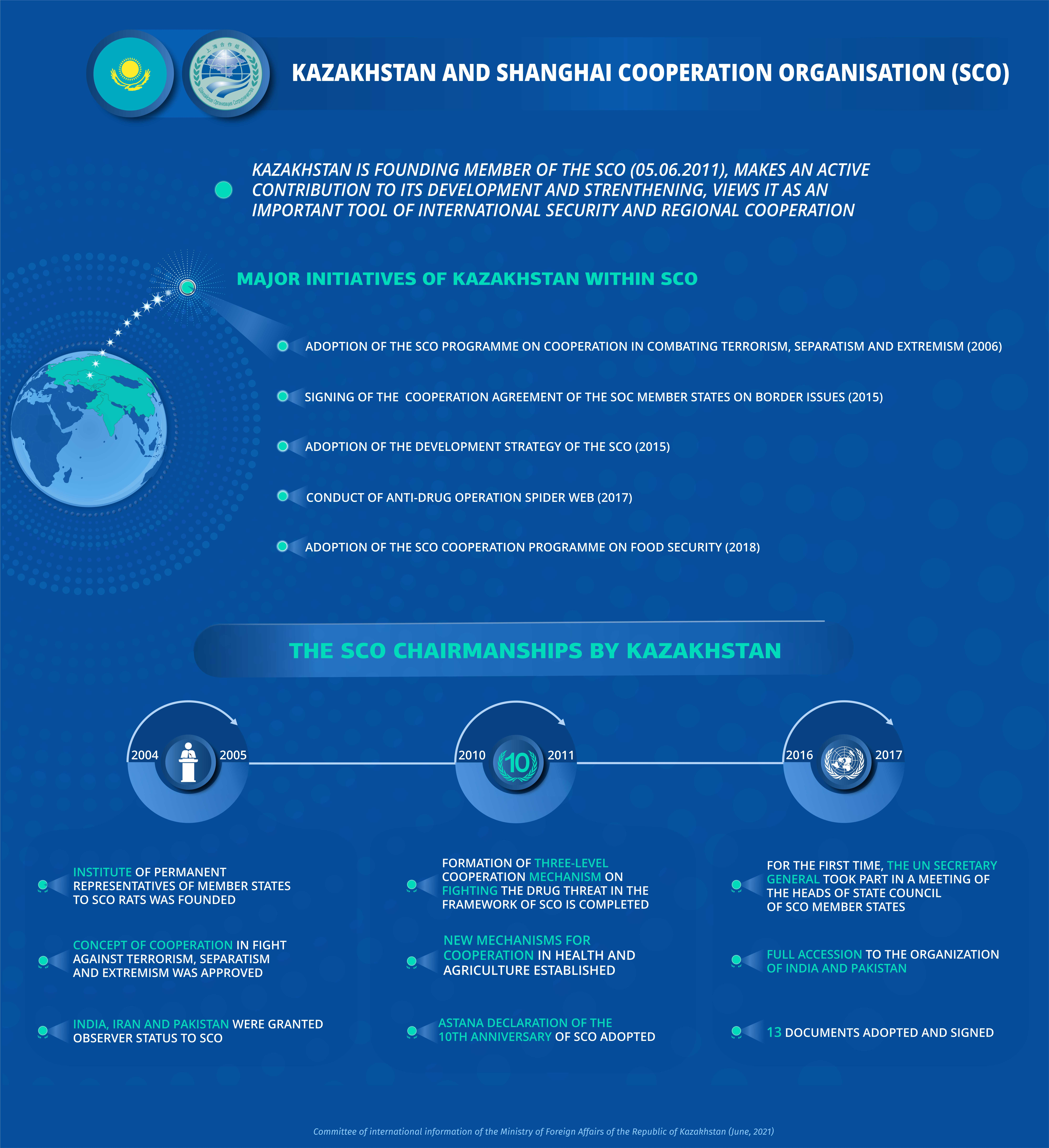 An important breakthrough in the development of the organization came in 1998, when during the summit of the Shanghai Five in Almaty, at the suggestion of Nazarbayev, the heads of our states consolidated the idea of ​​institutionalizing a new mechanism of cooperation in the region. This process came to its logical conclusion on June 15, 2001, when a joint Declaration on the Establishment of the Shanghai Cooperation Organization was adopted. There has been a noticeable transition from security issues to cooperation and development issues. In addition, Uzbekistan became a new member of the organization.

Since its inception, the main tasks of the SCO have been to strengthen mutual trust and good neighborliness between the member states and to promote their effective cooperation in the fields of politics, security, economy and culture.

The Astana Summit of the SCO, which took place in 2017, opened a new chapter in the development of the Organization. For the first time in the history of the SCO, the number of its members expanded following the admission of new member states – India and Pakistan. The participation of UN Secretary General Antonio Guterres in the SCO summit was a clear confirmation of the growing authority of the organization.

To date, the SCO space, including the observer states, covers the territory from the Atlantic to the Pacific Ocean and from the Arctic to the Indian Ocean. The Organization’s ranks feature two permanent members of the UN Security Council and four states with nuclear capabilities, two countries with the largest population on the planet and two of the largest energy consumers in the world, as well as three of the five BRICS countries.

As President of Kazakhstan Kassym-Jomart Tokayev noted in his statement at the SCO Summit on November 10, 2020, today the SCO is “rightfully regarded as an effective tool for strengthening cooperation and trust in an area covering a quarter of the planet’s territory, 40 percent of the world’s population and a third of the world’s GDP…”

With the completion of the institutional formation of the SCO, new mechanisms of international cooperation have emerged, which are characterized by new type of relations, taking into account the opinion of each member state. The most valuable aspect in the organization’s activities is the establishment of decision-making by consensus, which ensures a high level of trust in cooperation, the desire to better understand each other, and resolve all issues through dialogue.

For Kazakhstan, the main priorities of SCO membership are contribution to strengthening regional security, development of economic cooperation, expansion and implementation of the transit and transport potential of our region, and deepening humanitarian ties between member states.

Since the creation of the SCO, Kazakh diplomacy has proposed a number of original ideas, projects, documents and programs within its framework. In particular, at the suggestion of the Kazakh side, significant initiatives have been implemented, including the signing of the agreement on cooperation and interaction of the SCO member states on border issues, the adoption of the SCO development strategy until 2025, the SCO program on fighting against terrorism, separatism and extremism, the SCO food security program, the anti-drug operation “Web” in 2019–2020, etc.

Kazakhstan is the initiator of one of the key bodies of the SCO – the Council of Heads of Government, which focuses on the fundamental issues of developing interaction in practical areas, especially in the economic sphere. It is symbolic that in the anniversary year of the Organization, the next meeting of the prime ministers of the member states is planned to be held in November 2021 in Nur-Sultan.

An important contribution of the Kazakh side to the expansion of interaction between the SCO countries was the formation of cooperation mechanisms on border issues, the development of proposals to identify, prevent and suppress the use of the Internet for terrorist, separatist and extremist purposes, in the field of food security, healthcare, science and technology.

The adoption of the SCO Development Strategy until 2025 at the initiative of Kazakhstan during the Ufa summit six years ago gave a solid impetus to the dynamic development of cooperation between our countries. This program document reflects not only the prospects for cooperation in the political and economic spheres, but also offers ways and directions for a timely solution of the accumulated regional problems, including issues of ensuring environmental and food security.

Currently, a number of important initiatives of Kazakhstan are being considered within the SCO, including the adoption of a roadmap to increase the share of national currencies in mutual deals of the member states, the formation of a pool of modern technology parks, strengthening the potential of the SCO Regional Anti-Terrorist Structure (RATS) by creating an information security center on its territory, creation of a Eurasian financial advisory mechanism, and compilation of the Register of SCO environmental problems requiring urgent collective solutions.

Regarding the results of work over the past 20 years, I want to note that the SCO has undoubtedly made a great contribution to strengthening regional and global security. Effective consultative mechanisms have been created by the ministries of defense, law enforcement agencies and the judiciary, with the help of which the participating states conduct consultations, coordinate actions and provide mutual support to each other, as well as establish close cooperation on major international and regional issues. A solid regulatory framework has taken shape in the field of humanitarian cooperation, which is being implemented within the framework of intergovernmental agreements in the sphere of culture, education, health care, sports, tourism, scientific-technological cooperation, the media, etc.

Since 2006, SCO’s structures of economic cooperation including the Interbank Association and the Business Council have been functioning. Their tasks are to organize a financing mechanism and banking services for investment projects, to create favorable conditions for a regular dialogue between the business community of the member states in order to expand economic cooperation.

Kazakhstan, being an adherent of a multi-vector foreign policy, advocates establishing contacts and continuing active cooperation of the SCO with other regional and international organizations and dialogue platforms.

Since December 2004, the SCO has had observer status at the UN General Assembly. In 2010, the UN Secretariat and the SCO adopted a joint declaration on cooperation.

On the Kazakh initiative, the SCO signed memorandums of understanding with the Conference on Interaction and Confidence-Building Measures in Asia (2014) and the Astana International Financial Center (2019), a Protocol on Cooperation between the SCO RATS Executive Committee and the Central Asian Regional Information Coordination Center for Combating illicit trafficking in narcotic drugs, psychotropic substances and their precursors (2010). We believe the establishment of formalized relations between the SCO and the Eurasian Economic Commission would help unleash the potential for cooperation in the Eurasian space.

In this context, the initiative of Nazarbayev to promote the “Three Dialogues” should be noted. He described one of them as a systemic economic dialogue between the EAEU, EU, SCO and ASEAN. As the First President of Kazakhstan noted, the development of economic cooperation in this format can, firstly, give a powerful impetus for the development of our countries, economic growth and increase the well-being of citizens; secondly, create new sources of diversification, strengthening competitiveness, improving the business climate and increasing the investment attractiveness of states; and thirdly, transform into a signal for increasing the global role of Greater Eurasia.

The approaches of Kazakhstan to further implementation of cooperation in the economic and transit-transport sphere are carried out within the framework of the new economic policy Nurly Zhol (Bright Path), as well as its conjugation with the Chinese initiative “One Belt, One Road”. Here, the SCO is able to play an important role in the development of the transit and transport potential of Central Eurasia, taking into account such projects as the international transport corridor “Western Europe – Western China” and the growth of freight traffic by rail between Europe and Asia. Moreover, important transport arteries of international importance can pass through the territory of each member state.

One of the most pressing challenges to international cooperation facing the SCO, as well as the entire global community, is the COVID-19 pandemic.

In his statement at the 2020 summit, President Tokayev emphasized that the SCO was at its best in terms of coordinating efforts to overcome the negative consequences of the pandemic. According to him, the proverb ‘a friend is known in trouble’, which all of our peoples understand, most accurately reflects the spirit of cooperation between the SCO member states during the challenges of this destructive epidemic. A clear confirmation of this was the fact that mutual humanitarian assistance and the dispatch of epidemiological specialists helped to stabilize the situation in our countries. Added to this is mutual support in matters of mass vaccination of the population against the virus. In this regard, it was important to approve at last year’s SCO summit a Comprehensive Plan of Joint Actions to Counter the Threats of Epidemics as a collective response to this new and dangerous challenge to the security and well-being of our citizens.

In the year of the 20th anniversary of the SCO, we can state that our organization is entering a new stage in its historical development. It has in fact transformed into one of the important mechanisms for ensuring security and regional cooperation, which has gained recognition throughout the world.

As President Tokayev noted, “our peoples pin great hopes on the SCO. They expect that fruitful cooperation within the Organization on the basis of compromise and consideration of mutual interests will allow us to withstand the current trials and future challenges with honor, and improve the well-being of citizens.”

Today, marking the 20th anniversary of our organization, Kazakhstan hopes to continue active joint work with our SCO partners to solve common problems and further strengthen the Shanghai Spirit of good-neighborliness and cooperation.

The author is Ambassador-at-Large, National Coordinator of the Republic of Kazakhstan for the Shanghai Cooperation Organization.