By Staff Report in International on 26 May 2021

NUR-SULTAN – Kazakhstan has managed to minimize the negative impact of the pandemic, said Assistant to the President of Kazakhstan, Chairman of the Kazakhstan Council on International Relations Erlan Karin during the May 20 meeting of the Valdai International Discussion Club in Kazan. 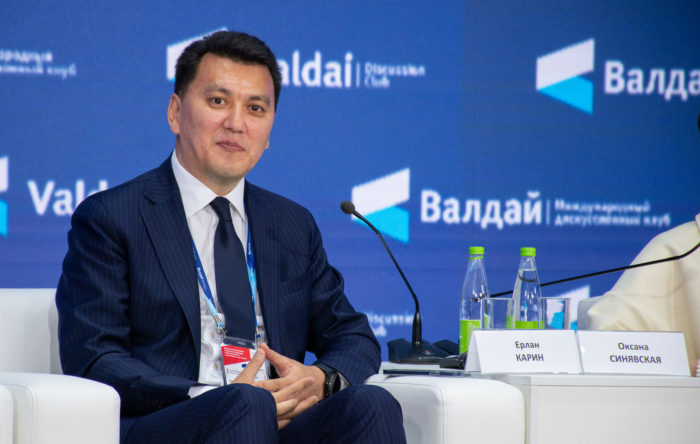 Erlan Karin delivers remarks at the the Central Asian Conference of the Valdai International Discussion Club titled “Russia and Central Asia Facing the Challenges of the New World — A Joint Path to the Future,” which was held on May 20-21 in Kazan. Photo credit: Valdaiclub.com

Despite the pandemic outbreak, the first package of political reforms, which was initiated by Kassym-Jomart Tokayev in December 2019, was fully implemented last year.

“A new law on rallies was developed and adopted. The reforms also affected the legislation on elections, parties, the Parliament and other areas, which include reducing the registration barrier for creating political parties from 40,000 to 20,000 people, introducing a 30 percent quota for women and youth on electoral party lists, and introducing the institution of parliamentary opposition. In addition, the Law of Kazakhstan “On the ratification of the Second Optional Protocol to the International Covenant on Civil and Political Rights, aiming at the abolition of the death penalty” was signed. Moreover, the course towards reforming the political system was strengthened by the initiatives of the second and third presidential packages of political reforms. As a result, direct elections of rural districts are planned for the second half of this year in the country,” Karin said.

During 2020, important changes were made in the system of government planning and management.

The Agency for Strategic Planning and Reforms was created with direct subordination to the President, and the Statistics Committee entered its subordination. Also, a transition was made from state programs to national projects in the public planning system.

According to Karin, in certain aspects, the situation with the pandemic has even accelerated the reform process. In May 2020, Kazakhstan held the third meeting of the National Council of Public Trust, devoted to the development of education and healthcare.

“Despite the fact that the pandemic forced in many cases the leaders of the countries of the region to switch to a remote format of interaction, this had almost no effect on the regularity and quality of cooperation. In most cases, interaction at the sites of the Eurasian Economic Union (EAEU), Shanghai Cooperation Organization (SCO), and other associations has been strengthened, including the coordination of measures to combat the coronavirus. Among such measures, it is worth noting the creation of a green corridor for the import of essential goods, the introduction of a duty-free regime for the import of individual components and materials into the territory of the EAEU for the production of medicines and disinfectants, medical supplies and others,” he said.