NUR-SULTAN – Kazakh President Kassym Jomart Tokayev signed “On Amendments and Additions to Certain Legislative Acts on Election Issues of Kazakhstan” into law on May 25, reports the Akorda Press.

According to political experts, the new law, which among other things sets up an electoral system of rural akims (heads of regional districts), serves as a new step to developing a civil-political culture in the country.

The President signed the law after it was ratified by both Majilis (the lower chamber of Kazakh Parliament) and the Senate earlier this month. The major amendments include lowering the threshold from 7 percent to 5 percent of votes for political parties to get elected into the Majilis and returning the “against all” option to voting ballots on all levels, as well as regulating the requirements for rural akim elections. 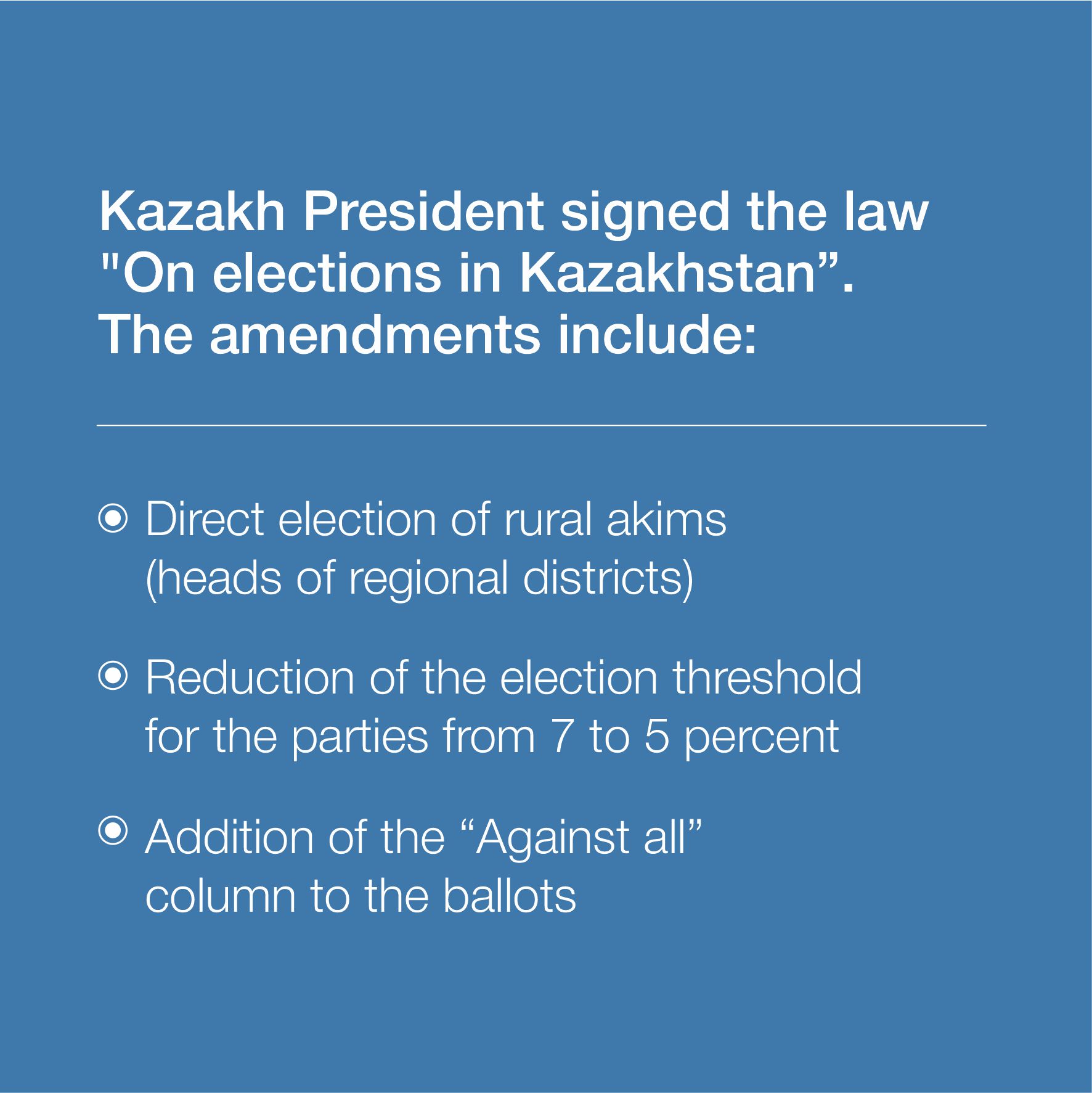 On his Telegram channel, Assistant to the Kazakh President Erlan Karin wrote that the ratification of the new law testifies to the effectiveness of the socio-political dialogue.

Karin explained that the amendments were open for discussions with the participation of the experts, civil activists and political parties. Discussions were also held at the National Council of Public Trust.

Karin noted that the law on elections is a part of the implementation of the key initiatives proposed by President Tokayev following the last Majilis elections held in January to develop a multi-party system and political competition, and to increase civic engagement. Ten laws have already been adopted.

Many top political pundits have already weighed in with their commentary.

Arman Toktushakov, an expert of the Institute of World Economics and Politics (IWEP), honed in on the lowering of the political threshold, observing that it will increase political competition during Parliamentary elections and capture a wider spectrum of political opinions come general election time.

Senior Researcher of the Department of Social and Political Studies at the Kazakh Institute for Strategic Studies (KazISS) Zhanar Sankhaeva said that the new proposed amendments would continue the reform of the local self-government system in Kazakhstan.

“When it comes to international practices, the system of self-government includes a number of elements, including the election of leaders of rural administration, the functioning of the rural council or the participation of people in assemblies, the formation of an independent budget, the expansion of its revenue and a change in the nature of relations between local and higher authorities. Thus, the new system for electing akims in Kazakhstan is primarily aimed at shaping sustainable development of rural areas by involving citizens in decision-making processes,” said Sankhaeva.

The election of rural akims represents a shift toward the bottom-up model of civil engagement, as local and regional parties will be able to build up their electoral power and rural voters will receive another channel for participation in the parliamentary processes. The readiness of the rural electorate to participate in rural akims’ elections is confirmed by the high activity of pool rural voters at the presidential and parliamentary elections held this year, according to Sankhaeva.

Senior Researcher of KazISS Slyamzhar Akhmetzharov noted the importance of the relationship between the akims and the local communities for ensuring the effectiveness of solving socio-economic issues in the regions. The rural akims are required to determine the problems of their communities and look for solutions with the local executive bodies or raise the issue at higher authority levels. At the same time, the activities of the akims require public oversight.

“The transparency and accountability of local executive bodies depend on how active their communities are. In addition, the inclusion of local communities in the process of discussing urgent problems allows us to develop a balanced state policy that reflects the interests of the local population,” said Akhmetzharov.

Electing rural akims is another step in the process of expanding direct political rights for the rural Kazakh population. In 2018, a fourth-level budget was introduced that allows villages with a population of more than 2,000 people to independently approve the budget. Thus, rural residents have the opportunity to track the volume of tax revenues and local budget revenues, as well as to determine priority areas where funds will be directed to.

Both Sankhaeva and Akhmetzharov agree that the introduction of direct elections of rural akims will have a positive impact on the socio-economic development of rural areas by creating transparent competition among candidates and encouraging the leaders to keep their promises to the public.

The new law will help facilitate more intensive interaction between rural voters and political institutions and improve the quality of political culture and electoral literacy in Kazakhstan.