Meeting on the Elbe: Kazakh Soldier Among First to Meet with American Allies

By Miral Dzharmukhambetov in Society on 8 May 2021

AKTOBE – Soviet soldier Aitkali Alibekov made history by taking part in the long-awaited meeting between the Soviet and American troops at Germany’s Elbe River near Torgau on April 25, 1945, reported the Aktobe Vestnik newspaper. This meeting marks a decisive the end of the war.

Alibekov went to war in 1944 and fought until the end of the war. He served in the 58th Infantry Division in Poland, took part in the battle of the Sandomierz bridgehead, crossed the Oder River, and took part in the liberation of the western bank of the Vistula River.

Later the war veteran was mentioned by American military historians who investigated the story of the Elbe River meeting. Five years after his death, in 1988, Soviet Novosti Press Agency and Capra Press published a book “Yanks Meet Reds: Recollections of U.S. and Soviet Vets from the Linkup in World War II”, which describes Aitkali Alibekov as the first Soviet soldier whom the American soldiers met on the Elbe. 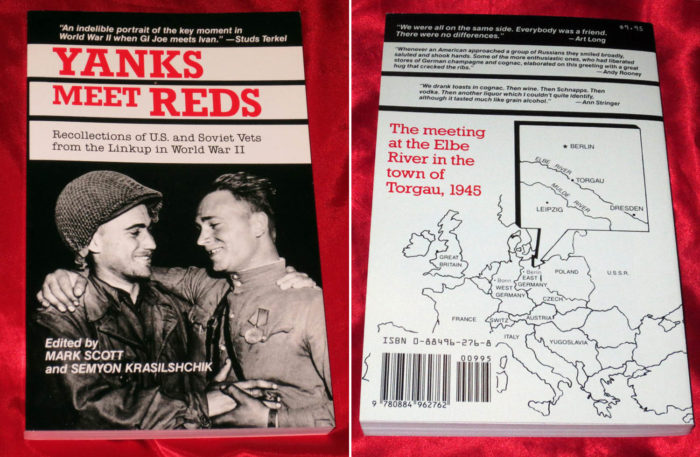 The cover of “Yanks Meet Reds: Recollections of U.S. and Soviet Vets from the Linkup in World War II” book.

According to the American military sources, on the afternoon of April 24, 1945, the commander of the 273rd Infantry Regiment, Colonel Charles M. Adams, sent a patrol headed by First Lieutenant Arnold Kotzebue from G Company to meet the Soviet troops.

“The second patrol was directed by Major Fred W. Craig, Second Battalion Executive. The third patrol, commanded by Second Lieutenant William Robertson of the first Battalion, 273rd Infantry Regiment, went into the same area to search for allied prisoners of war. They didn’t plan to meet with the Russians,” the document reads. 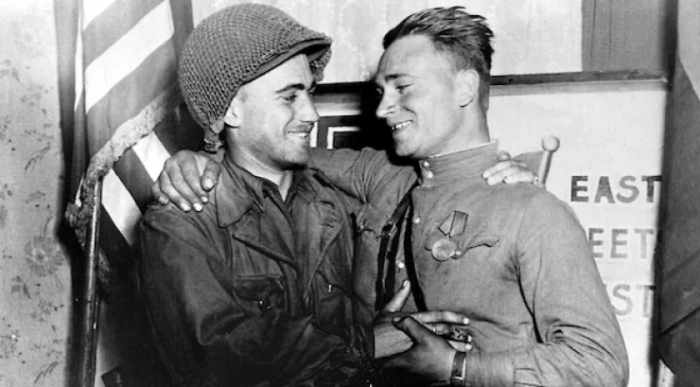 On the morning of April 25, Kotzebue’s patrol entered the small village of Leckwitz, two miles from the Elbe. Unexpectedly, Lieutenant saw a horseman riding into the courtyard of one of the houses on the central street. The unusual appearance of the horseman dressed in a strange military uniform surprised the Americans. They knew he was not a German.

“The Americans followed the rider. They were almost confident that they met a Soviet soldier. He was talking with the foreign workers abducted by the Germans. It was 11:30 a.m. and it was a historic moment: the first linkup between the American and Soviet troops was established,” the report says.

The book editor clarifies, the horseman’s name was Aitkali Alibekov. The publication features a photograph of Alexander Olshansky and Aitkali Alibekov with a written caption: “The first Soviet soldier whom Kotzebue’s patrol met.”

The recollections of American military historian Bill Fox confirm the encounter of the American Lieutenant with a Soviet soldier, riding into the courtyard of a house in Leckwitz at 11:30 a.m. on April 25, 1945.

“This was a long-awaited linkup. The soldier demonstrated calm and restraint. When I asked about the whereabouts of his command, he waved his hand eastward and said that his checkpoint was in the southeast,” Lieutenant Kotzebue described the meeting with a Soviet soldier on horseback.

Lieutenant Robertson met with the Russians on the destroyed bridge over the Elbe in Torgau later the same day, at 16:00 PM. However, his patrol was formally announced as the first to meet Red Army troops under the command of Lieutenant Alexander Silvashko on the destroyed Elbe bridge in Torgau on April 25, 1945.

Wikipedia says that “the first contact between American and Soviet patrols occurred near Strehla, after First Lieutenant Albert Kotzebue, an American soldier, crossed the River Elbe in a boat with three men of an intelligence and reconnaissance platoon. On the east bank they met forward elements of a Soviet Guards rifle regiment of the First Ukrainian Front, under the command of Lieutenant Colonel Alexander Gordeyev. The same day, another patrol under Second Lieutenant William Robertson with Frank Huff, James McDonnell and Paul Staub met a Soviet patrol commanded by Lieutenant Alexander Silvashko on the destroyed Elbe bridge of Torgau.”

As the American command did not receive any details of the meeting from Lieutenant Kotzebue at that time, the official ceremony was scheduled in Torgau.

The allies officially announced the historic meeting on the Elbe on April 27, 1945. Lieutenant Kotzebue and Major Craig were forgotten. By will of fate, Lieutenants Robertson and Silvashko made history.

Millions of people in the West know about the events that took place on the day of the historic meeting on the Elbe on April 25, 1945. They have no doubt that the first Soviet soldier to meet the Americans on that remarkable day was Kazakh Aitkali Alibekov.

The story was originally published in the Aktobe Vestnik newspaper.