NUR-SULTAN – Deputy Prime Minister and Minister of Foreign Affairs Mukhtar Tileuberdi participated in the 18th EU-Kazakhstan Cooperation Council May 10 in Belgium that focused on next steps concerning the EU-Kazakhstan Enhanced Partnership and Cooperation Agreement. 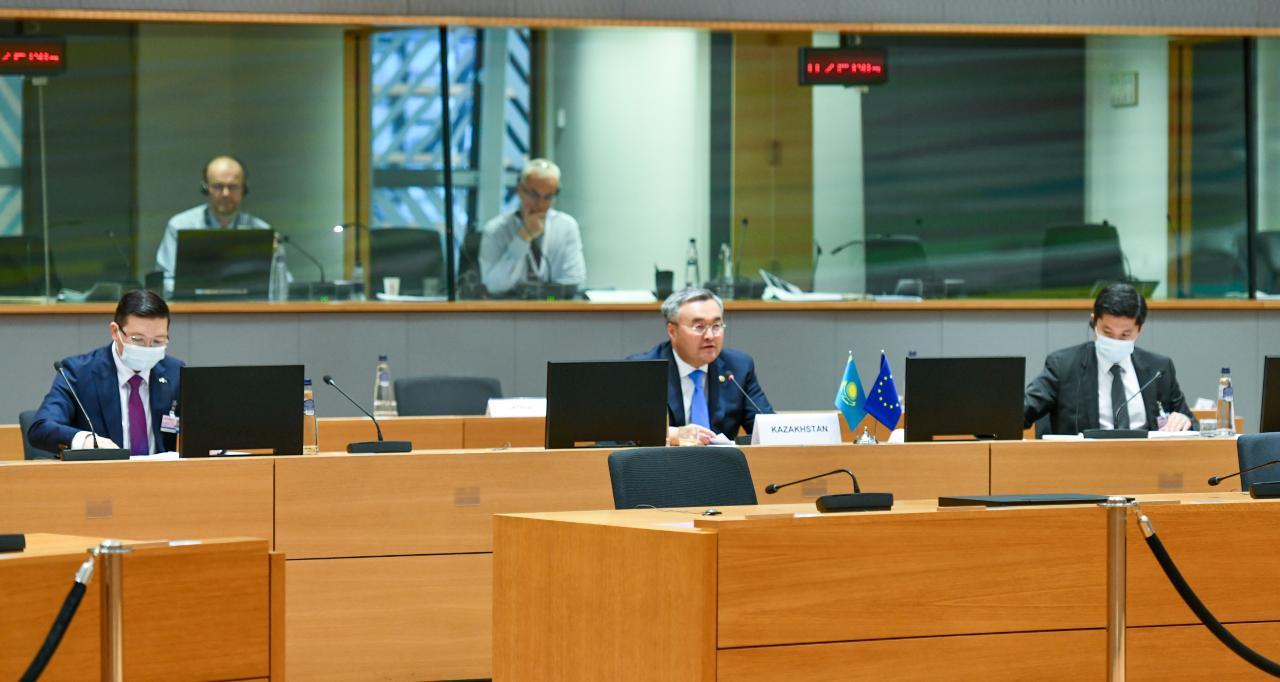 The agreement covers 29 areas of cooperation, from economy and trade to countering the proliferation of weapons of mass destruction and terrorism and cooperation in climate change, healthcare, public finance management and taxation.

The implementation of the EPCA marks a “new stage of bilateral cooperation,” said Tileuberdi at a press conference wrapping up the meeting. He noted the important role of the EU in the Kazakh economy.

The EU consisting of 27 member-states, is a major trade and investment partner for Kazakhstan accounting for close to 30 percent of the country’s total trade in 2020. From 2005 through 2020, EU countries have invested more than $157 billion in Kazakhstan.

“I have assured our European counterparts that the government of Kazakhstan is ready to create favorable investment conditions for EU companies. We also discussed ways to promote exports and supply of our products to the EU market,” said Tileuberidi.

The sides agreed on the importance of facilitating cooperation in green energy, transport, environmental protection, education and science, including expanding access of Kazakh youth to academic and scientific exchange programs with the EU, such as Erasmus+ and Horizon Europe.

Tileuberdi said the meeting also discussed the possibility of a simplified visa regime for Kazakh citizens to the EU, a priority for Kazakhstan in strengthening people-to-people contact.

Overall, the sides agreed on the need to diversify the areas of cooperation.

“Kazakhstan, like the EU, plans to achieve carbon neutrality by 2060. In this regard, we expressed our interest in finding new areas for cooperation under the Paris agreement and the European Green Deal,” said the minister.

With the evolving nature of the pandemic, vaccination has been an important topic on the meeting agenda, as the vaccine rollout continues in the EU and in Kazakhstan.

The sides discussed a Green Certificate initiative proposed by the EU to ensure safe travel within the union from June 2021.

Tileuberdi also briefed his counterparts on Kazakhstan’s own vaccine, QazVac, developed by the Kazakh Biosafety Research Institute. While the vaccine is used to immunise the citizens, phase III of clinical trials are expected to be completed in June.

The minister proposed to facilitate cooperation between Kazakh and European scientific and research organizations in the fight against the COVID-19 pandemic. 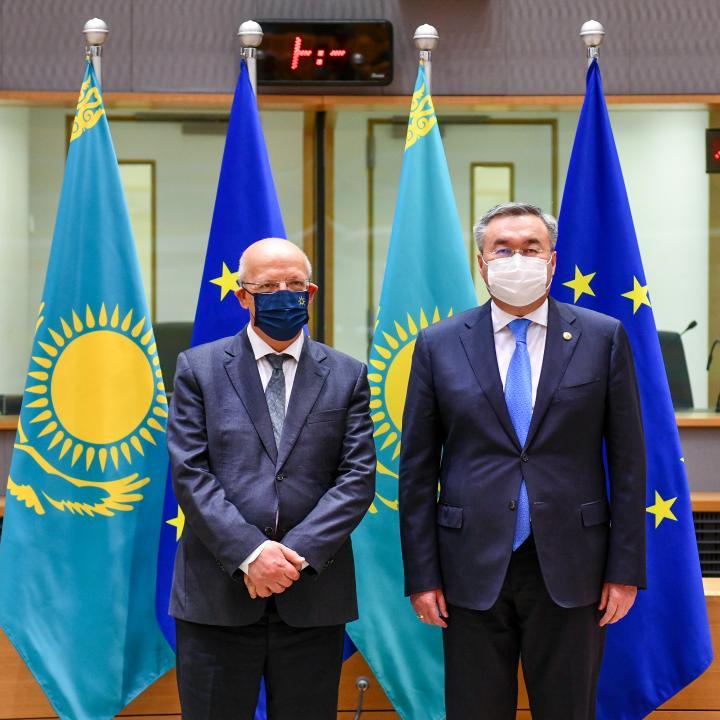 Speaking at the press conference, Portuguese Foreign Minister Augusto Santos Silva, whose country presides over the Council of the European Union in 2021, said the meeting allowed a reinforced political dialogue and noted the EU supports Kazakhstan’s ongoing reforms.

“Even in a year as difficult as last year, the EU has consolidated its position as Kazakhstan’s trade partner and first foreign investor and Kazakhstan remains the main trade partner of the EU in Central Asia,” said Silva.

More opportunities to be unlocked

The same day in Brussels, Tileuberdi addressed the 31st meeting of the Berlin Eurasian Club (BEC) which gathered senior European and Kazakh officials to discuss cooperation and attracting new investments in agriculture and tourism and developing Kazakhstan’s export potential. 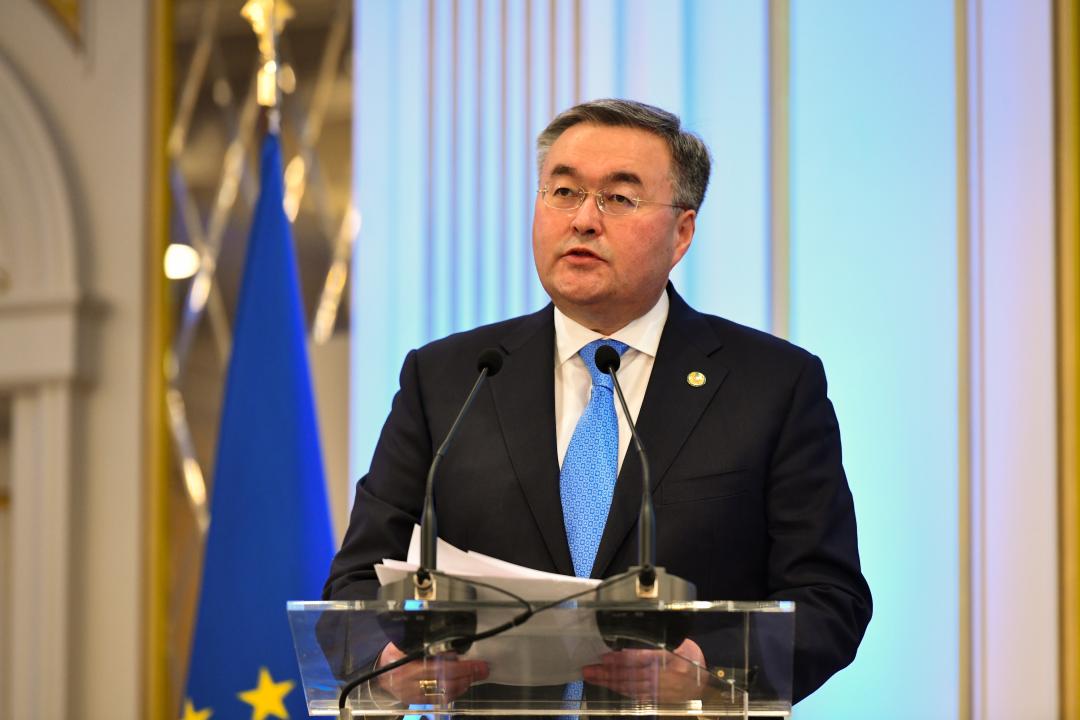 Organized by the Eastern Committee of the German Economy and the Embassy of Kazakhstan in Germany, the meeting sought to discuss solutions to minimizing the negative economic impact of the COVID-19 pandemic and supporting businesses.

In his opening remarks, Minister Tleuberdi spoke about Kazakhstan’s efforts to ensure sustainable economic growth and said the development of agriculture and tourism are priority areas in attracting foreign investments in the Kazakh economy.

He reiterated the importance of the EPCA in fostering this area.

“The entry into force of this document exactly one year ago marks a significant historical milestone for both sides in mutual cooperation, and will give a new impetus to the comprehensive dialogue of Kazakhstan with the EU and the EU member states both in a bilateral format and at the regional and global levels,” he said at the meeting.

The Berlin Eurasian Club was established in 2012 on the initiative of Kazakhstan’s First President Nursultan Nazarbayev and the former Deputy Chancellor and Minister of Foreign Affairs of Germany Hans-Dietrich Genscher to serve as an informal dialogue platform for government agencies, businesses and experts.